Omar Adam Sayfo describes how both the Syrian government and the rebels have employed music as a weapon in the Syrian conflict. 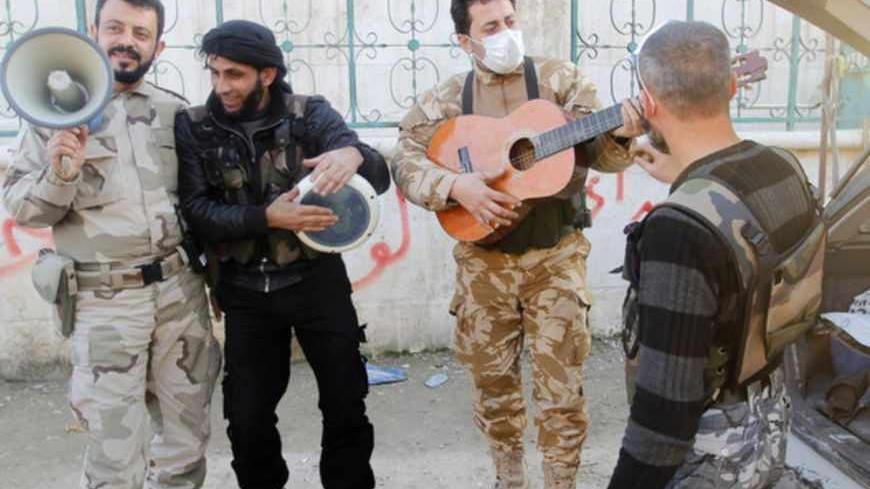 Members of the Free Syrian Army chant as one of them plays the guitar near Nairab military airport in Aleppo Feb. 26, 2013. - REUTERS/Hamid Khatib
Omar Adam Sayfo
May 6, 2013

Once upon a peacetime Syria, listening to Fairouz was an indispensable ritual on sleepy weekday mornings. Emotional songs extolling an idealized country life, love and patriotism flowed from radios, offering temporary mental respite from the problems of day. The Lebanese diva from an Orthodox Christian background united Syrians regardless of age or religion. However, with the unfolding sectarian-flavored civil war, the idylliic Syria of Fairouz seems to be gone. In war-torn Syria, music has become a tool for hostile fractions to fuel and mobilize their supporters, and the new hits are dividing the country along political and sectarian lines.

At the beginning of the uprising, an unknown young man called Hamwee Ibrahim Qashoosh appeared at a demonstration in the city of Homs singing his song “Yalla irhal ya Bashar” ("Get Out Bashar"). The catchy tune, blending traditional dabke music with anti-regime verses, became an instant hit in early anti-regime protests. The sarcastic lyrics mocking President Bashar al-Assad and accusing his brother Maher of being a coward and collaborating with the Americans, broke down the walls of fear and silence.

The regime could not let Qashoosh get away with the offence. In July 2011, the security services arrested him and cut his throat in a brutal retaliation. The death of the composer gave an iconic importance to the hit, inspiring a number of anti-Assad performers to produce their own similar songs. The song even moved beyond Syria's borders after Omar Offendum, a Syrian-American rapper, released a powerful tribute song featuring Qashoosh’s famous verse.

The Syrian government also harnessed the power of music from the beginning of the uprising. The state TV channels had been filling all possible slots with videos of dynamic battle songs. Even some of Fairouz’ songs were employed as soundtracks for video clips praising the Syrian army. The regime also counted on well-known loyalist performers to win Syrian hearts. A case in point is Ali al-Deek, an Alawite singer from the same sect as Assad. At the start of the demonstrations in 2011, al-Deek rushed to release a joyful anthem, “Good Morning Syria,” celebrating the beauty and peace of his homeland. As the fighting escalated, he came up with a more direct statement, “My Eyes, God Syria … Syria al-Assad,” in support of Assad, the “pride of the Arab nation,” showing a video clip of people waving flags and cheering for the president. In private, al-Deek seems to be even more explicit. Surrounded by a pro-regime crowd at a concert given in Cleveland, Ohio, in January 2013, al-Deek mocked the “enemies of Syria,” US President Barack Obama among them.

As Hezbollah fighters came to the aid of the Assad regime, so did their musicians. Ali al-Attar, the Lebanese Shia Party’s number-one pop star, composed an all-out battle song, “Your Hand on Your Weapon,” showering praise on the Syrian army. As the tensions of Syria swept to neighboring Lebanon, fueling clashes between supporters and opponents of Assad, so escalated the musical battles. Once a celebrated star of Beirut night clubs, Fadel Shaker is now a supporter of local salafists, raising his voice in support of Syrian revolutionaries.

The Syrian government’s propaganda had one of its weirdest moments when presenting a patriotic song entitled “I am Syrian, God Is on My Side;” with a clip taken from a popular soap opera about Damascene resistance against French colonialism. The clip showed a scene from the past, with actors waving pre-Baathist Syrian flags currently used by the rebels. No wonder the song found its way into hearts of loyalists and the opposition alike.

Just as the regime has its musicians, so does the Free Syrian Army. One of the most prominent anti-Assad performers is Yahya Hawwa, a former dissident and Quran reciter. The nephew of a member of the Muslim Brotherhood killed by Assad’s father in the early 1980s, Hawwa composed a number of pro-revolution pop songs and performed for Syrians in nearby countries. Not only mainstream musicians, but young rappers have also been inspired. Similarly to many of his peers, Mc Roco raps from an unknown location and posts his songs on YouTube. Another rapper, Ahmad al-Khalaf, from the war-torn northern Idleb province, raps in English to make international audiences aware of the Syrian situation.

The Jabhat al-Nusra, al-Qaeda’s new Syrian ally, also participates in the music war. Because Salafis believe that the use of instruments is un-Islamic, al-Nusra supporters sing traditional nasheeds empowered with jihadi lyrics. The lack of instruments does not detract from music. The general atmosphere of some events organized by al-Nusra resemble Western rock concerts rather than Islamic ceremonies, with the audience jumping in ecstasy, applauding and singing along with the performers. The Salafis proved to be bold in combining earlier, non-political nasheeds such as “Ween Ayyamna Ween” ("Where are Our Days?") with political lyrics containing verses praising Mullah Omar and Osama Bin Laden and expressing their wish to wipe out the Alawites from the country. Jihadi performers do not hesitate to make use of the tunes of well-known hits such as the one by Nagah Salam, a Lebanese star of the 1960s (see from 2:46). However, the lyrics do not praise a girl’s beauty, but the glory of the Taliban.

As the fighting escalates, a tiny minority still rocks the cradle of hope. Mir (“peace” in Russian), a rap duo founded in Damascus, composes sorrowful songs, begging Syrians to overcome political divisions. Undoubtedly, the greatest challenge today is creating a new Syrian Top 10, accepted by all.

Omar Adam Sayfo is a researcher in the Netherlands specializing in Arab media.