Rap music has exploded among young Iraqi protesters, who bring the music with them to energize their demonstrations. 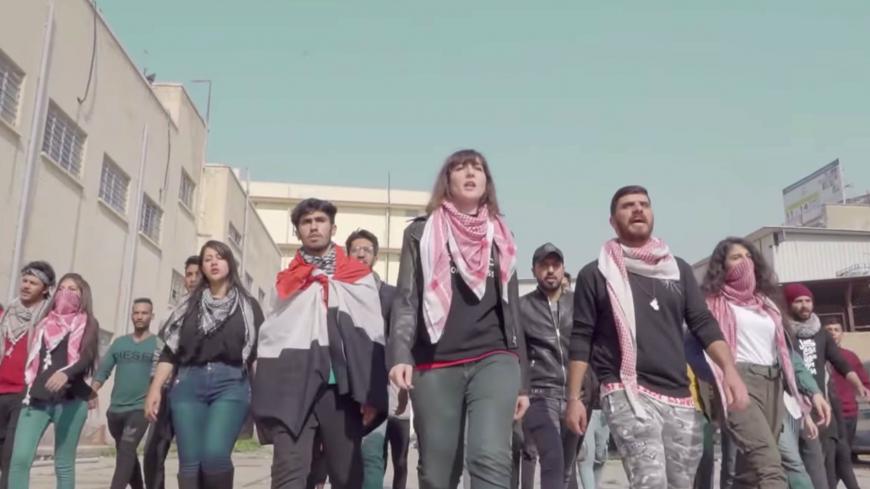 Rap, with its daring lyrics and catchy rhythms, has become the battle cry of Iraq’s anti-government protests that have been ongoing since October.

“We, generation of revenge/Revolution of liberators/I don’t carry guns, my weapons are my ideas and thoughts,” Anhar, better known as MC Anhar, raps on his YouTube channel. Young Iraqis take his music to the protests and sit-ins in the capital’s squares.

Until the 2010s, rap had not caught on in Iraq except for a small group of young people. But protests cast a spotlight on both young Iraqi rappers — some of whom reside outside the country — and their searing lyrics that spare none of Iraq’s ruling parties. Some contain thinly veiled insults toward the government officials while others target resigned Prime Minister Adel Abdul-Mahdi. They also condemn the involvement of Sadrist movement leader Muqtada al-Sadr in the demonstrations.

The revolutionary rap pays homage to Iraqi millennials — the generation born between the 1990s and early 2000s — who have been on the streets in 11 governorates in central and southern Iraq since Oct. 1. Nearly 600 people have been killed and more than 22,000 injured in the protests.

Besides the young demonstrators, the rappers also praise women as a primary force of the demonstrations, as well as the tuk-tuk drivers who have taken the injured to the hospitals. Some condemn those who have chosen to go to work and university while striking protesters are getting killed and injured.

Many songs refer to the protests as a “revolution” and encourage Iraqis to take to the streets against the ruling authorities to bring about political change in Iraq.

Rapper Saket, known for his rap and hip hop songs on YouTube, performed at Tahrir Square in January. “Playing at Tahrir Square was a dream come true," Saket, whose real name is Bakr, told Al-Monitor. "I couldn't believe it was happening.”

Rap music has become more popular in Iraq over the past few years partly because two of the most famous satirical Iraqi programs, "Al-Basheer Show" and "Wilayat Batikh" (“A Watermelon State”), include rap segments.

One of the songs that was featured on "Al-Basheer Show," “Thayl Awaj” (“Twisted Tail”) by Ayman Hamid, took off among demonstrators in the last few months. In colloquial Iraqi Arabic, tail means “puppet,” as in a politician who is the lackey of external groups and sells out his nation’s interests.

“He hates our gathering / He does because he is a tail / Tail! He gives up on his families and his people / It’s twisted, who can make is straight? / Tail! Bringing snipers on me and showing himself proud before the neighbors,” it goes.

Enchanted by the daring genre, many young demonstrators created videos of themselves singing the song and posted them on YouTube.

“I was surprised at the popularity of the song. It is the first time in my life that I've seen a huge demonstration at which people memorize a rap song and sing it,” Hamid told Al-Monitor. “I think Iraqis are starting to embrace rap. For a long time, society considered rap a bad form of music, but it has now become popular.”

He added, “The revolution is bold and needs art and music that reflect that boldness.”

Anhar, a 22 -year-old rapper who lives in Sweden, agrees that young Iraqis are embracing rap music.

“The revolution changed everything. It even changed the musical genres we listen to,” Anhar told Al-Monitor. The young Iraqi rapper has a YouTube channel where he uploads work mixing loud Western music with Iraqi flavor. He includes pictures of Iraqi politicians while his lyrics criticize them harshly. Explicit and anti-Iranian, one of his songs also refers to “Iran's tails in Iraq,” meaning Iraqi political leaders who have extensive ties with Iran.

Historically, politically critical music has been risky in Iraq. Songs had until fairly recently been limited to praising ruling officials, particularly the late Iraqi President Saddam Hussein. They praised his wars, his personality and leadership.

Singers who disobeyed faced prison sentences, such as late singer Aziz Ali, satirist of the 1940s and 50s, or Sabah al-Sahel, who was executed by Saddam's orders in 1993 for publicly insulting the president at a concert.

After the occupation of Baghdad in April 2003, patriotic songs soared in popularity. They were dedicated to specific occasions such as elections, the war on terrorism or urging fighters to eliminate the Islamic State.

But the popular rap tunes that have emerged in Iraqi protests are completely different. They openly address Iranian interference in Iraq and the crises that afflict society. They borrow both from Western styles and traditional Iraqi music, with its melancholic tunes. Iraq's three top rap stars — Saket, Hamid and Anhar — were all born in the 1990s. They have lived through the wars and political crises that Iraq experienced during the past two decades and know all too well the pains and challenges of daily life.

Saket still lives in Baghdad and participates in the protests. He had left his hometown after his father was killed in 2007, but returned home recently. “The revolution will create a real change. … I have always dreamed of and called for a revolution in Iraq,” he said.

Hamid and Anhar have both left Iraq for political reasons. They dream of singing among the young Iraqis who listen to their songs at the demonstrations and send them praise over social media. All of the young rappers say they are preparing new songs about the protests and are happy that their music is becoming popular on the streets and squares, despite all the risks involved for musicians who raise their voices against the government.