Tunisian presidential candidates are using an arsenal of musical to try to woo the young as well as evoke nostalgia for past in their campaigns for the elections scheduled for Sept. 15. 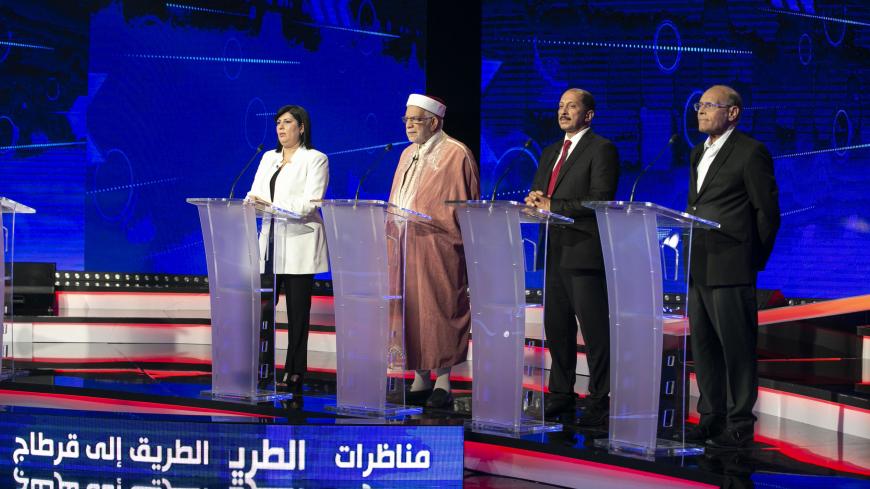 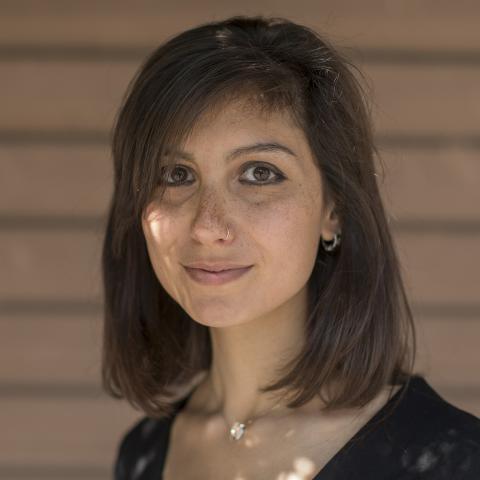 Ululations, drums and strobe lights catapulted Tunisian presidential candidate Abdelfattah Mourou onto the stage at the Palais des Congrès in central Tunis. A passerby might have mistaken the event for a wedding, instead of the launch of an Ennahda election campaign.

Over synthesized notes from a kanun, a string instrument,  voices chanted, “Mourou, Our President, Mourou,” in an anthem recorded for the campaign. The 71-year-old Mourou, who has distanced himself from his party’s more socially conservative positions, danced jovially in his trademark jebba. The national anthem was also among the music played, and Islamic prayers were invoked.

Ennahda's choice of Mourou as its first presidential candidate and the selection of music played at his campaign launch perhaps reflects the moderate Islamist party's ongoing wariness of polarizing the country and its goal of generating broad appeal. Mourou is appreciated among urban intellectual circles and within his party as an educated and worldly politician. The media often notes that he can speak as well as sing in German.

Mourou's anthem is one of the more recent additions to Ennahda's playlist. In 2016, when the party wanted to shed its Islamist label in favor of a Muslim democratic image, it came up with a series of soccer-style chants, which have been dusted off for the current campaign.

“We wanted to show that the party was the party of everyone, that we go to soccer games, we are in the stadium, that [we] can be for everyone,” Rafik Amara, communications consultant and organizer of Ennahda's 2016 party congress, told Al-Monitor. “The stadium is like the mosque for the youth. [These songs] are a message for young people.”

Amara’s team took the familiar melodies from Tunisia's four main football teams and added various lyrics. This year, a group of musicians did the same with an Algerian rai song popularized by the trio 1 2 Soleils and offered it to Ennahda for its campaign. The other parties in the presidential race may not have their own anthems, but they too are sending messages with their selection of music at campaign inaugurations.

At the launch of Abir Moussi’s campaign, people waved flags to Amina Fakhet’s interpretaion of the Lebanese singer Melhem Barakat’s nationalistic “Our Appointment in Our Land” at a sports hall in La Goulette, a working-class seaside Tunis suburb. Moussi, formerly a member of deposed President Zine El Abidine Ben Ali’s Democratic Constitutional Rally, has been campaigning on a nostalgia ticket for the Free Destourian Party.

Speaking to Al-Monitor, Radhi Chawaly, a musician and producer, said of Fakhet's song, “This is a song you would hear a lot during the fake elections that Ben Ali held or for official national occasions, like November 7 [the date Ben Ali took power in 1987].”

Moussi's campaign prepared the crowd for her entrance with a slideshow that included images of terrorists and expensive tomatoes as examples of the problems Tunisia has faced since the 2011 revolution. Moussi then ascended the stage to her fight song, “Eye of the Tiger,” by Survivor.

“She is a strong woman and she wants the law,” Nouha Kamzani, a supporter from the northern town of Siliana, told Al-Monitor. “She speaks to all the people. The other [candidates] are bourgeois.”

Moussi has been called a populist (“chaabawiya”). She rejects this term, but she invited a band to perform hadhra, Sufi music.

Thameur Mekki, editor in chief of Nawaat, told Al-Monitor, “This [hadhra] is populist. For a campaign, they won't do something innovative. They are going to choose something that is festive, brings people together and doesn’t express a determined project.” He noted that the late President Beji Caid Essebsi, also the founder of Nidaa Tounes, had also featured hadhra in his 2014 campaign.

The media tycoon Nabil Karoui, also has also been called a populist, used another style of Sufi music, medha, to launch his campaign.

“Everyone loves Sufi music,” Mahmoud Essaidi, artistic director for Heart of Tunisia (Qalb Tounes) who has been in charge of Karoui’s image for the last 13 years, told Al-Monitor. “It is spectacular, a show, and it [crosses] all the regions.”

Karoui, who was recently imprisoned for money laundering, says he wants to fight poverty in Tunisia’s marginalized interior regions. He has traveled widely on behalf of his charity, Khalil Tounes, which provides economic assistance to the needy.

By featuring medha in the campaign launch, Essaidi wanted to highlight the link between Karoui’s presidential bid and Khalil Tounes, whose activities are featured on Karoui’s TV channel, Nessma, and which has medha as its theme tune.

“It runs deep,” Essaidi said, relating Karoui's charity work to his desire to serve the people as president. “There is a continuity. It is Khalil Tounes that brought us here.” Essaidi said. This link almost disqualified Karoui from running after parliament approved an electoral law amendment banning presidential candidates from using charities and media for political gain. Essebsi, however, died without signing it into law.

Zbidi kicked off his campaign in his home region, Mahdia. A doctor by profession, Zbidi claims he never wanted to be a politician. He kept a low profile and is better known for organizing Essebsi's funeral than parties. That said, after his campaign launch, he held a bigger event at the tomb of Habib Bourguiba, founder of the Republic of Tunisia, in Monastir, organized by Fadhel Jaziri, the same producer who ran Essebsi’s 2014 campaign.

The national anthem was the only music at Youssef Chahed's campaign launch, but the 43-year-old, the youngest candidate in the race, is keen on highlighting that he is a big fan of rap. In July, he tweeted a photo from a concert in Carthage by the Algerian rapper Soolking alongside the lyrics, “Je chante l’amour au milieu de cette guérilla” (I sing love in the middle of this guerilla). Last month on the Attessia channel, Chahed revealed more about his favorite rappers. “I don’t only listen to Samara,” he told the presenter. “For a long time, I’ve followed others, like Balti and Master Sina.”

“The rappers he named are the ones with the most traction on YouTube,” said Mekki, who is making a documentary about Tunisian rap. “He just wants to seduce a certain electorate — the young people from working class neighborhoods. It goes with his attempt to play the youth card.”

If the low voter turnout in the 2018 municipal elections is any indication, the youth vote is likely to remain elusive despite the parties' efforts to appear through football chants, rap music and otherwise.