A $1 million lobbying contract first revealed by Al-Monitor has sparked a criminal complaint against a leading presidential candidate. 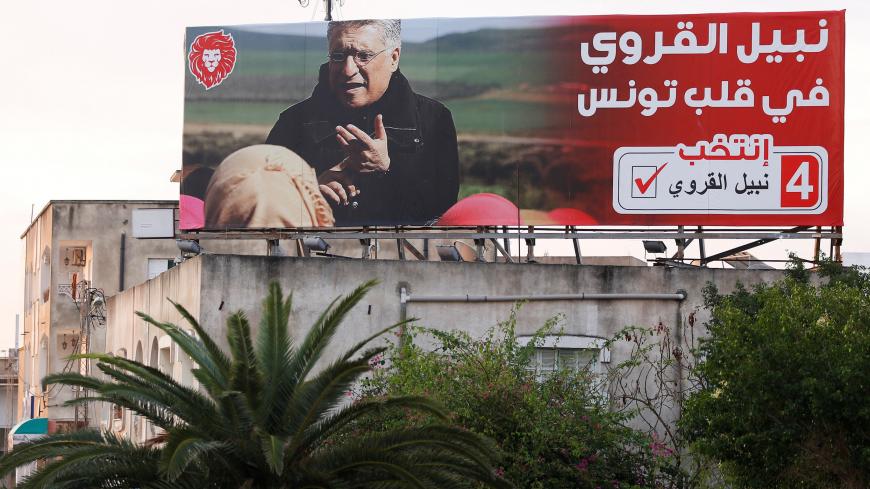 TUNIS, Tunisia — As Tunisians prepare for back-to-back legislative and presidential elections, news first revealed by Al-Monitor has had a bombshell effect: A purported emissary of imprisoned presidential candidate Nabil Karoui signed a $1 million lobbying contract to secure a meeting with President Donald Trump, among others.

Karoui’s newly formed Qalb Tounes (Heart of Tunisia) party is leading in the polls for Sunday’s legislative elections. The jailed businessman's rivals are demanding that he be disqualified from a presidential runoff that is set to be held Oct. 13. One rival, the Democratic Current party, filed a criminal complaint with the public prosecutor today at the Tunis Court of First Instance, calling the contract with Canadian firm Dickens & Madson a criminal act.

Karoui’s opponents cite laws that forbid any foreign funding or support for Tunisians running for office. “The money didn’t come from Tunisia so it came from outside Tunisia, and that is against the law,” said Leila Chettaoui, a member of parliament for Prime Minister Youssef Chahed’s pro-secular Tahya Tounes party. “If it’s proven to be the case, Karoui must be disqualified.”

The complaint also mentions Ennahda party, which has retained Burson-Marsteller (now BCW) for public affairs work in the United States since 2014, as well as parliamentary candidate Olfa Terras-Rambourg, who retained Washington firm America to Africa Consulting in early September.

Jaouhar Ben Mbarek, a Tunisian constitutional law professor, concurred in a post on Facebook. “This can be considered foreign support and funding for Karoui’s election campaign, which is in breach of Tunisia’s electoral law,” he wrote. “This should lead to the disqualification of the candidate and of his party’s lists.”

Under the terms of the contract signed Aug. 19 by Mohamed Bouderbala, an individual apparently acting on Karoui’s behalf, Dickens & Madson is instructed to lobby the United States, Russia, the European Union and the United Nations in view of “attaining the presidency of the Republic of Tunisia.” It calls on Dickens & Madson's president, Ari Ben-Menashe, to secure meetings with Trump and other senior US officials before the elections. He’s also to arrange face time with Russia’s president, Vladimir Putin, to obtain “material support for the push for the presidency.”

Karoui’s lieutenants have sought to discredit the lobbying records, which the US Justice Department published on its website Wednesday. A statement on Karoui’s Twitter account labeled the story “a fierce and distorting campaign,” and insisted there was no relationship “either near or far” between Karoui “and the contract and its contents.”

The statement noted that Karoui would seek legal redress against those who portrayed him “in such a despicable manner.” It closed by referring to Karoui’s “principled and consistent position in supporting the Palestinian cause.” The party apparently felt compelled to emphasize their leader’s pro-Palestinian stance in response to critics’ claims he was colluding with Israeli agents. Ben-Menashe is a former Israeli intelligence officer.

In an interview with Al-Monitor, Ben-Menashe stood by his filing with the Department of Justice, which identifies Karoui as the beneficiary of his lobbying efforts. “Dickens & Madson never signs contracts with people [we] don’t know,” Ben-Menashe said. Asked about Karoui’s denial, he said, “I refer you to FARA,” using the acronym for the Foreign Agents Registration Act.

Samira Chaouachi, a spokeswoman for Qalb Tounes who is running for parliament, sounded unfazed. “After all that’s been thrown at us we have grown used to such adversity,” she told Al-Monitor. “The fact is that half a million Tunisians voted for Nabil Karoui and had he not been in prison he would have won 7 or 8% more of the vote, according to our polling data.”

Karoui, 56, was arrested for alleged tax evasion and money laundering Aug. 23, just days after the contract was signed. The charges stem from a case brought against him two years ago by I-Watch, an anti-corruption watchdog. The nonprofit has filed similar complaints against other powerful businessmen and politicians, including Chahed. Karoui rejected the charges, saying his arrest was engineered to prevent him and his party from gaining power.

The media magnate has cast himself as the champion of Tunisia’s poor through his popular Nessma TV channel and his charity organization, Khalil, named after his 18-year-old son who died in a car crash. Critics disparage him as “Karoui Macaroni” because his charity has donated large amounts of pasta, among other things, to Tunisia’s swollen underclass.

It remains unclear what effect the lobbying contract will have on Karoui’s political fortunes and that of his party.

The country’s electoral watchdog is already in a bind over how to treat the corruption case against the self-made tycoon. Representatives of the High Authority for Elections (ISIE) met with Karoui in jail today.

Earlier this week, a Tunisian court rebuffed a request for Karoui’s release. I-Watch President Achraf Aouadi ​told Al-Monitor, “If he wins the election he must be freed. The will of the Tunisian people must be respected.” Aouadi became the target of a smear campaign orchestrated by Nessma TV after I-Watch filed the charges against Karoui that resulted in his arrest.

Some draw parallels between Karoui and Trump, both wealthy populists who have taken on the establishment and whose supporters are apparently immune to allegations of wrongdoing, putting it all down to “fake news.” Chaouachi agreed there may be some similarities. “They are both leaders who think outside of the box, who challenge convention.” She added, however, that “they are fundamentally different, and Mr. Karaoui is unique.”

Julian Pecquet contributed to this report.