Tunisians get wide variety of choices in presidential election

Tunisia just saw its first presidential debates, and 26 candidates are vying in the Sept. 15 election to succeed Beiji Caid Essebsi, who died July 25 at the age of 92. 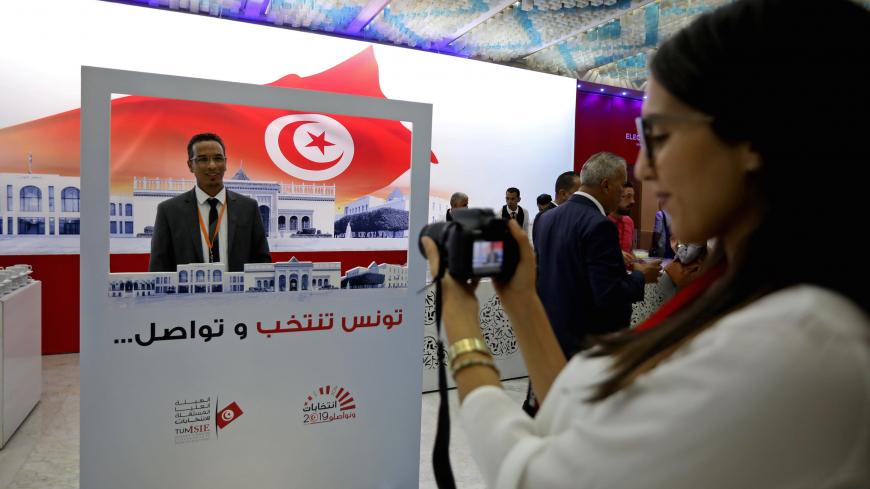 A man poses for a picture with a poster that reads in Arabic "Tunis, Elect and Continue" during the opening of the media center for the presidential election in Tunis, Tunisia, Sept. 12, 2019. - REUTERS/Muhammad Hamed

With Tunisians set to vote in presidential elections Sept. 15, debate about political developments and scandals has heated up both on social media and in cafes. However, as official opinion polling in the electoral campaign period is illegal in Tunisia, what is helping and hindering Tunisians to make up their minds?

The live TV debates — called “The Road to Carthage: Tunisia Decides” and held over three consecutive nights Sept. 7-9 — have been one of the big game changers. They were the first televised presidential debates to be held in Tunisia and only the second in the Arab world, the first being in 2012 in Eygpt.

The election features 26 candidates, including many of the country's best-known politicians. These include Prime Minister Youssef Chahed (who has temporarily handed over his duties), Defense Minister Abdelkarim Zbidi, Ennahda movement Vice President Abdelfattah Mourou, former President Moncef Marzouki and former Prime Minister Hamadi Jebali. Also running is detained media businessman Nabil Karoui. If no candidate wins a majority, there will be a runoff to choose the succcessor of President Beiji Caid Essebsi, who died in July at 92.

Trying to assess who the real front-runners are in the final few days is proving difficult due to the lack of polls; the last surveys were done in July before Essebsi's death. Emrhod Consulting published an opinion poll July 15 that put Karoui of Qalb Tounes (“Heart of Tunisia”) in the lead with 23% followed by independent candidate Kais Said with 14% and Chahed with 7.8%; however, after that the field became flooded and grew to 26 candidates.

Debate co-organizer Munathara said 3 million TV viewers along with 1 million livestream viewers tuned in to the debates. Former Munathara spokeswoman and award-winning Tunisian journalist Mabrouka Khedir told Al-Monitor, “Everyone has been talking about it across the social media networks and people have contacted me thanking me for this concept.”

While the debates were more like a slow-moving game show than an actual debate, they managed to expose some candidates’ weaknesses with brutal clarity, creating definite winners and losers. Khedir said, “The big winner was Mohammed Abbou,” leader of the small centrist party Democratic Wave. He is a lawyer and veteran human rights’ activist focused on creating social mobility and improving parliamentary democracy.

However, in Khedir’s view many political giants were undone. She said that on the first night, “Morou was a big loser.” Mourou, the candidate for the Muslim democratic party Ennahda, is known for being a great orator with flamboyant style, yet that evening appeared underprepared.

Abdelkarim Zbidi, backed by the secularist Nidaa Tounes and hailed as the chosen heir of Essebsi, was another giant to be felled. His slogan “It’s about the actions, not the words,” meant to be a riposte to public jokes about his mumbling speaking style, did not save him in the program as he mumbled and stumbled over any questions that did not relate to defense or security. Essebsi died at age 92 in July.

Notably absent was Karoui, who sits in prison under investigation for alleged financial crimes. His incarceration has surely garnered him more press than if he were free. Rules banning Karoui and exiled Free Patriotic Union candidate Slim Riahi from appearing on broadcast media, let alone participating in the debates, has been denounced by electoral observers as an issue of electoral equality. These observers include the European Election Observation Mission.

Khedir said she did not think Karoui's inability to take part in the TV debates “will have an impact, those who want to vote for Karoui will go out and vote for Karoui.”

Sarah Jenene of Webradar, an online data analytics company based in Tunis that analyzes political debate on social media, mainly on Facebook, spoke with Al-Monitor about the metrics the company saw prior to the debates. Jenene said some of the politicians with the most positive mentions on social media before the debates didn’t do so well in the televised showdown. Going into the debates Omar Mansour (who ended up bombing) had 24.4% of positive mentions, followed by Mourou with 17.8%, and Marzouki (president from 2011-14 and currently leader of Al Hirak Party) with 12.1%. The latter did in fact do well in the first debate.

The candidate with the most negative comments was Tahya Tounes' Chahed, a sentiment that was borne out in recent attacks. Chahed was physically attacked  by a woman on his visit to Siliana, the homeground of Hamma Hammami, the presidential candidate of the leftist Popular Front coalition. Images began circulating on Facebook of Chahed’s campaign posters being attacked and burned by angry protesters affected by flash floods that hit the Tunisian capital Sept. 11.

The third debate ended in fireworks when Hammami poked fun at Chahed who, in his final 99-second speech on electoral promises, said, “I will continue to fight terrorism and don’t vote for corrupt people!” Tunisians in the cafe where Al-Monitor’s correspondent was watching the debate howled with laughter as they watched Hammami grin and chortle like the Cheshire Cat.

Hammami delivered a swift three-point rundown of his election promises, including “stopping the ALECA [EU free trade] negotiations” and defending Tunisian sovereignty before exploding with laughter, saying, “Don’t vote for corruption!” followed by, “Corruption is standing on my left, this is not defamation, it is true!” In the cafe, the predominantly leftist and liberal audience roared with laughter, applauding Hammami. It was the most entertaining moment of the debates and reminiscent of the banter one might find in the British House of Commons.

Up to this point Chahed had done well in a stiff, statesmanesque way. He demanded an opportunity to reply to Hammami, and got it. “I talk about giving jobs to young people. They’re sick of insults and defamation by politicians,” he said.

The garrulous audience, which continued watching despite the rain, booed, cheered, hissed and applauded as they saw the politicians show themselves to the world. Afterward one young man told Al-Monitor of the debates, “As usual it’s all just blah, blah, blah.”

The prohibition on political polling has created a vacuum of sorts.

On Sept. 11 a fake poll, apparently forged with photo editing software that showing polling company Sigma Conseil’s branding, placed Karoui as the front-runner and was spread on Whatsapp before being denounced as fraudulent by Sigma Conseil director Hassen Zargouni.

Nabil Balaam, president of Emrhod Consulting and a member of the World Association of Public Opinion Research, told Al-Monitor that the ban on official opinion polls is potentially dangerous as “it leaves the door open to disinformation and political media manipulation on social media, where you see either bad or fake opinion polls.” He said that with professional opinion polling companies, “We explain the process, the questions, everything is transparent.” He added that he is involved in creating a draft law that would open up the field to professional opinion polling and surveys throughout the whole process. “We want to lift the restrictions so that everyone is informed,” he said.

Emna Benari of Mourakiboun, a Tunisian election observatory founded in 2011, told Al-Monitor, “If TV channels publish these they’re liable for fines of 50,000 Tunisia dinars,” or about $17,500. Yet the big problem is that regulating political infractions on social media is nearly impossible. Benari said, “There is no legal framework to regulate opinion polls.”

The amount of information about the candidates is overwhelming and every day seems to bring big swings in the popularity stakes. On Sept. 9 Chahed was riding high, but on Sept. 11 he was a subject of protest. Zbidi and Mourou have the backing of the biggest political voting blocs. However, a big surprise could still be in store. Karoui remains a hot contender, but with the vote being split 26 ways this could give outsiders such as Abbou and Marzouki more than a chance at going through to the second round.