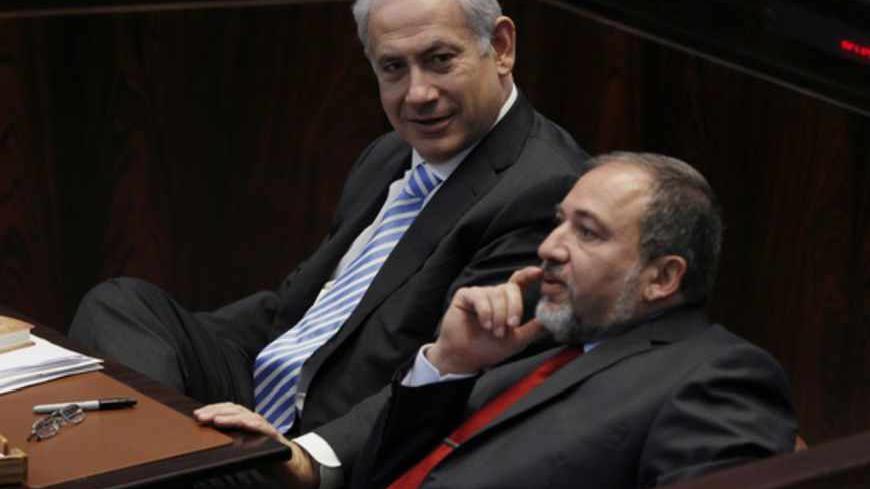 It's fair to say Israeli Prime Minister Benjamin Netanyahu is pining for his previous term.

He had it easier then. The coalition was homogeneous and submissive, and let him sit back in comfort without confronting him with tough challenges. His political allies were a group of yes-men, and all in all, life was good. Much has already been said about how difficult it is for Netanyahu to view his current partners, Finance Minister Yair Lapid and Economy and Trade Minister Naftali Bennett, as people he can rely on (despite Lapid having recently been doing his utmost to prove to Netanyahu that he, like former defense minister Ehud Barak, can toe the line and be compliant without posing challenges).

And yet, despite all of the above, there is certainly one thing from the 18th Knesset that the prime minister does not miss: the “race to the right” involving several members of his party that tortured him throughout his previous term.

Netanyahu is convinced that the obsessive struggle by the members of his party in the previous term over who would be the most hard-line right-winger cost the Likud party many seats in these last elections. It goes without saying, however, that everything begins with the identity of the electorate: Likud members who vote in the primaries for the party’s list for the Knesset.

Over the past decade, the Likud list has undergone a dramatic transformation. More and more settlers and nationalist Orthodox Jews have joined the Likud for ideological reasons and have become a dominant force that cannot be ignored. The shift was complete when the members of the faction became, voluntarily or not, submissive servants of these settlers. In the last term, the Likud, which had prided itself on being “liberal,” turned into the ultimate settlers party. Likud Knesset members competed with each other to see who would promote more draconian laws and who would issue the most radical and provocative statements.

The harsh words paid off. In the primaries held this past November to determine the Likud’s list of candidates for the elections, the Knesset members who had successfully internalized the new rules of the game, such as Danny Danon, Ze’ev Elkin and Yariv Levin, scored very impressive achievements. Those who refused to betray their consciences and maintained moderate or liberal agendas, like Dan Meridor, Benny Begin and Michael Eitan, found themselves kicked to the curb.

Then came the general elections, in which the settlers and religious Zionists voted en masse for HaBayit HaYehudi party. Centrist voters could not tolerate the Likud’s right-wing character and voted for Yair Lapid — and the ruling party found itself losing out both ways.

Now Netanyahu wants to change the rules of the game. He has no desire to spend the next few years engaged in an awkward dance with the members of his faction who are promoting undemocratic bills due to pressure from the settlers. He’s sick of being the "responsible adult” who has to watch out for his hyperactive children while they start fires to gather a few more votes in the primaries.

If it were up to him, he would convene the Likud Central Committee tomorrow and change the party’s constitution to cancel the primaries and authorize a committee (which he would control) to choose the Likud’s list of candidates for the next elections on its own. The days of settlers controlling the Knesset are over.

So why hasn’t Netanyahu done this? Because he realizes that he doesn’t have a chance of passing this kind of initiative in the Likud Central Committee. The party's activists would not give up on their powers. Therefore, in complete contradiction with the constitution of his party, the prime minister has refused for over a year to convene the Likud's Central Committee, inactive since it was elected a year and a half ago.

Now, Netanyahu is cooking up a two-stage plan which, if successful, would allow him to deftly retake control of his party. In the first phase, the members of his party would be asked to approve full unification of the Likud and former foreign minister Avigdor Liberman’s Yisrael Beiteinu. At this point there is only limited parliamentary cooperation between the parties, and Netanyahu and Liberman want a full merger. In the second phase, after Liberman becomes an integral component of the Likud, he will bring in thousands of his yes-men to the party’s organs, and they (who always follow the boss’ orders) will make it possible for the prime minister to pass the initiative to cancel the primaries.

The prime minister’s plan goes like this: First, bring Liberman in through the front door, and then kick the primaries out the back. That’s how he hopes to stem the wave of populism and incitement that washed over his faction in his previous term.

To pave the way for this maneuver, he recently attempted to oust the CEO of the Likud and appoint one of his people instead. But he even failed in this procedural move. Netanyahu no longer has a political “operator” on the inside who can wield tight control of the party and promote internal moves on his behalf.

In order to secure a majority in the Likud's institutions, he needs help from the key ministers in his government, who are far more involved in the day-to-day doings of the party than he is. The problem, though, is that they are in no hurry to help him with his marriage to Liberman. After all, they have heard the rumor of the “ultimate deal” between Netanyahu and Liberman, the thrust of which is that the prime minister will lead the unified party to the next elections and will then deposit the inheritance with his loyal partner.

Liberman, however, declares that if he is found guilty in the case against him, he may retire from political life. This, however, is of no comfort to the key players in the Likud. They certainly won’t do the work for Netanyahu. So as far as the prime minister is concerned, he has a long way to go on the road to his dream of heading an obedient faction that he can control by consolidating forces with Liberman.