The Lebanese parliament remains incapable of putting forth legislation amid prevailing uncertainty about the electoral law and the standing Taif Agreement, which influence the representation of different sects in the government. 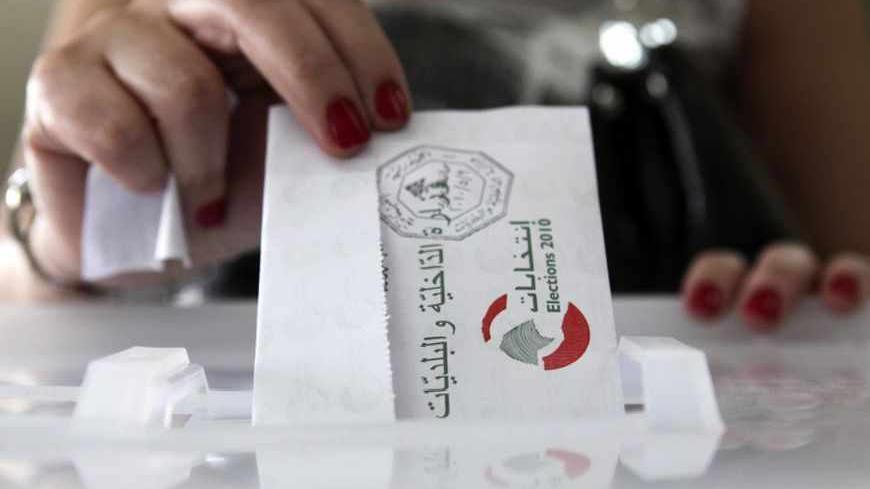 A woman casts her ballot at a polling station during Lebanon's municipal elections, in Beirut, May 9, 2010. - REUTERS/Cynthia Karam

For instance, the provisions of the current electoral law, dubbed the “1960 law,” are in direct conflict with the Lebanese constitution, according to which Lebanese people have equal representation quotas. Pursuant to the current electoral law, certain MPs could secure a place in parliament with thousands of votes in some constituencies, while others may need tens of thousands of votes to win a seat. This is not to mention that according to the current law, a significant part of Christian MPs are elected by Muslim votes.

During the past months, there has been a need to formulate a new, fairer electoral law. However, intense political disputes in the country — which are connected to regional differences — have prevented the drafting of a new electoral law.

With the expiration of the constitutional deadline to amend the electoral law, and given that the term of the current parliament will come to an end in the second half of June, not to mention that political factions have yet to reach a consensus on a new electoral law, Lebanon stands today at a crossroads. It can either opt to extend the term of parliament to try to formulate a new electoral law and therefore hold elections on this basis; or it can hold elections based on the 1960 law, given that is the only legitimate solution in the absence of consensus on any other law.

In any case, both solutions reflect the depth of the political and constitutional crisis that Lebanon has been going through.

The most dangerous implication of the current crisis is that it could lead the political system to a structural crisis that would be difficult to overcome with cosmetic solutions. This is not to mention that, in light of domestic and regional considerations, it is impossible to make any substantial changes to the system.

There have been several key signs emerging from the current crisis indicating the nature of challenges threatening Lebanon’s political stability and coexistence, according to its current rules that are not likely to be remedied in light of the internal and external situation.

First, a significant part of Lebanese Christians believe that balanced sectarian representation can be mended with their Sunni partners in peace. This representation was disturbed when Maronites were forced to relinquish some of their major political and constitutional power — which they had during the first Republic (1983-1989) — as the result of drafting the constitution of Taif.

Thus, the Orthodox electoral law has been put forth, according to which each sectarian group would elect its own candidates on a proportional basis. The major Christian political bloc (including the Free Patriotic Movement, the Marada movement, the Kataeb Party, and even Bikirki [the seat of the Maronite Patriarchy] indirectly) was expecting that the Sunni partners would accept the Orthodox proposal as an acknowledgement that the Taif Agreement needed to be amended in terms of fixing the Christian representation and not in terms of restoring the powers of the Maronite President of the Republic.

Nevertheless, the Orthodox proposal was rejected as the quorum has not been reached during the parliament session due to the opposition of the Sunni bloc that is mainly allied with the Druze and some Christian parties.

This has reflected that Sunni partners (the biggest community in the country) have refused to establish a new settlement with Christians. Sunnis continue to insist that Christians relinquish powers under the Taif Agreement so as to reflect the new balances of power in the country and that they have to be realistic about this fact.

This also demonstrates that the Taif Agreement, which has served as a constitutional chart for the Second Republic in Lebanon, is no longer unanimously agreed upon by all Lebanese. It has become in the eyes of a large part of Christians an agreement that reflects their existence under a political system that reproduces their defeat in the civil war, which broke out during the 1970s and 1980s and resulted in the Taif Agreement under Arab and International auspices.

Moreover, [rejecting the Orthodox proposal] indicates that the country is going through a crisis that has been gripping the political system at all levels. This is especially true, since the crisis of a new electoral law that can produce a just sectarian representation, coincided with the crisis of the resigned government of Najib Mikati, about two month ago, which is now limited to managing day-to-day state affairs.

These overlapping crises suggest that Lebanon’s various institutions are no longer able to uphold the state’s affairs. The legitimacy of the Constitutional Council, which is in charge of monitoring constitutional legitimacy, has become disreputable. Meanwhile, parliament is paralyzed as a result of sharp divisions, preventing it from producing legislation.

Moreover, the military council (which is similar to the Government of the Lebanese Army) has been also become paralyzed. Thus, the military institution is likely to embark on the path of vacuum, as most of its members are retired, while no constitutional provision has been set yet to [choose] any alternatives.

What’s more, the commander of the Lebanese Armed Forces is set to retire in September. Thus, all leaders of the military institutions will soon become leaders by proxy.

Hence, current events clearly indicate that the Lebanese crisis has gone beyond the political situation and has gripped the entire political system, undermining the state and sectarian coexistence.