“Show of Force” was a successful Israeli operation killing Fatah Military Chief Abu Jihad, but did it not also kill a potential peace partner? 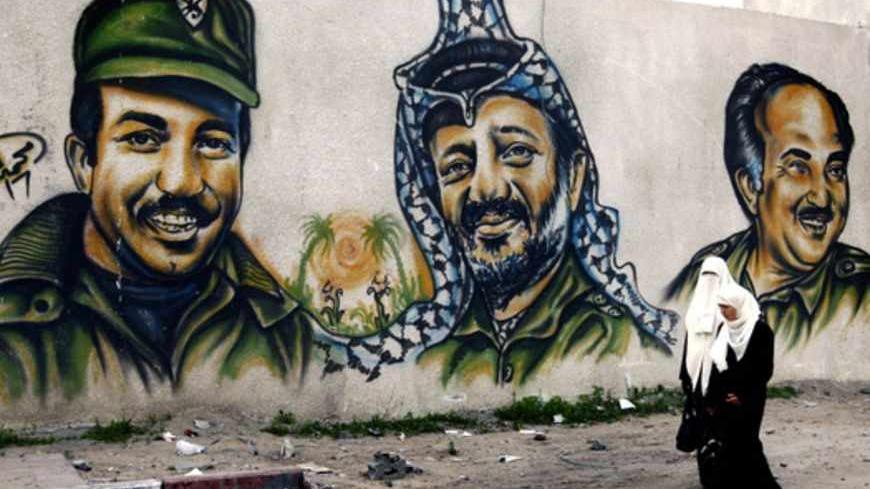 Palestinian women walk by the walls of the destroyed Hamas headquarters compound in Gaza, Jan. 24, 2009. In the background are portraits of (from left) Khalil al-Wazir (second in command in Fatah movement, Yasser Arafat (late Palestinian president) and Salah Khalaf (co-founder of the Palestine Liberation Organization), all deceased. - REUTERS/Yannis Behrakis

Top Fatah activist Khalil al-Wazir, aka Abu Jihad, was assassinated by Israel exactly 25 years and one month ago. On Monday [May 27] the investigative program Uvda on Israel’s Channel 2 (the most popular channel in Israel) aired a fascinating documentary that recreated the assassination. It's still considered one of the country’s most epic commando operations, long since inscribed in the nation’s collective DNA as an iconic representation of what is deemed here, “the long arm of the IDF,” which knows how to settle bloody accounts with the Jewish state’s worst enemies, no matter where they're hiding. Uvda is the Israeli equivalent of 60 Minutes, and the show was this season’s finale.

Officially, Israel has not taken credit for the assassination of Abu Jihad until now. Credit for the operation could only be given to the Matkal Commando Unit and the Naval Commandos, the IDF’s two finest units, by citing “foreign publications.” What happened that the Israeli censors suddenly decided to lift the ban, and many senior Israeli officials faced the cameras to quarrel over who deserves the glory for something that happened so long ago? Why now, when US Secretary of State John Kerry is still working up a sweat running around the region, so that he can soon present Israel and the Palestinians with a proposal to restart the diplomatic process that they cannot, and should not, turn down?

There are a few versions as to why. First of all, it could just be a coincidence. When push comes to shove, most conspiracies in Israel turn out to be the result of poor management. Secondly, it could well be that the time has come for Defense Minister Moshe ''Bogie'' Yaalon to bolster his status as the country’s new “No. 1 Soldier.” Now that he has entered former Defense Minister Ehud Barak’s shoes, he also deserves a little bit of glory. Yaalon does not appear in the film’s interview segments. He doesn’t speak, so he doesn’t describe what happened there.

Nevertheless, his picture from those days embellishes just about every segment of the broadcast, and his steady, confident voice over the radio offers one of the film’s clearest narratives. As usual, the main suspect is Barak, who always knew how to use state secrets to promote himself. But the truth is that it doesn’t really matter. The world knew that Israel assassinated Abu Jihad from the very first moment, and it seems to me that Abu Jihad knew it too in that split second in which he stood facing his masked executioners.

Abu Jihad was former Palestinian Chairman Yasser Arafat’s deputy in the Fatah leadership. As head of the movement’s military wing, he was behind the bloodiest terror attacks to shock Israeli during these decades. There was the hijacking of a bus on the Coastal Highway in 1978, in which 35 Israeli civilians were killed in cold blood; the brutal attack on Nahariya (1979), in which Samir Kuntar smashed in the head of a child, while a mother, who was hiding from the terrorists in a cupboard, accidentally suffocated her younger daughter as she tried to stifle her tears; the attack on the Savoy Hotel in Tel Aviv (1975), the attempt to land a boat with terrorists on the Tel Aviv beach to attack the IDF’s Staff Headquarters in the city center (1985) and an endless list of violent terrorist strikes, many of them targeting women and children. In technical terms, Abu Jihad was a marked man. It seems to me that in relative terms, he caused more damage to Israel than former al-Qaeda leader Osama Bin Laden did to the United States. If Abu Jihad would have done to America what he did to Israel, the US would have eliminated him. If he had done it to Russia, it would have eliminated him too, along with the village, or city, in which he lived.

But Israel is an entirely different story. Every action that Israel takes is perceived, judged and measured by the world by completely different tools. Israeli interests are complex, sensitive and sometimes at cross-purposes. Israel must think twice, and sometimes even a hundred times, before it takes any irrevocable actions. Consider one small example of this. Abbas al-Musawi was the head of Hezbollah and a bitter enemy of Israel. In 1992 he was assassinated by a precision missile fired from an Israeli helicopter in Lebanon, and Hassan Nasrallah replaced him. It is my estimation that Israel would now be prepared to invest a considerable amount of money, effort and creative planning to put the two men back to where they were before.

The Tunis raid was the perfect commando operation. I don’t believe any other country in the world has the capability to execute such an efficient operation. Four Israeli missile boats, accompanied by fighter jets, left Haifa port (separately, so as not to leave an intelligence imprint) with 20 Israeli naval commandos and 20 soldiers from the Matkal Commando Unit on board. At about the same time, three Mossad agents (two men and a woman) arrived in Tunis using foreign passports, and rented a villa near Abu Jihad’s home in the same upscale neighborhood in the Tunisian capital, as well as renting three commercial vehicles. The intelligence was accurate in every detail. Abu Jihad’s home was sketched out and recreated at Mossad headquarters in Tel Aviv, down to the last fork in the kitchen.

When the commandos burst in, they knew exactly where every stair was, where every doorway was, and what there was in every room. It was as if they had burst into their own houses. They landed on the beach in tiny speedboats, were picked up by the Mossad agents, and killed the guard at the door of the house with a laser-guided Luger equipped with a silencer. Then they burst inside and fired over 70 rounds into Abu Jihad. His wife and children were at home at the time. Umm Jihad was pushed aside so that she would not be hurt. So were the children. Now, I know of many countries and organizations that would not leave a single member of the family alive. Morally, the IDF operates on a very different level, at least in most cases.

The operation, code-named “Show of Force,” had many heroes. There was the late Chief-of-Staff Dan Shomron, his Deputy Ehud Barak (who remained true to form and took most of the praise for the operation; he features in most of the photographs “left” from it), Deputy Commander of the Navy Ami Ayalon, naval commando Yoav Galant, chief of the Matkal elite Commando Unit Moshe “Bogie” Yaalon and many other good men. Over time, Barak became prime minister of Israel and minister of defense, Galant was almost appointed chief of staff (his appointment was withdrawn at the last minute), Ami Ayalon became commander of the Navy, head of the Shin Bet and later a failed politician, and  Yaalon was recently appointed Israel’s defense minister. His code name during the operation was Bogart, and during the Channel 2 broadcast, we could hear authentic radio messages that “Bogart” sent back to the war room floating off the coast that “the Boss” had been eliminated. On the missile boats on their way back to Israel, they opened a bottle of Champagne. Back then, they had good reason to do so.

Hindsight is 20/20, but sometimes it is all we have left. In retrospect, it is hardly certain that Israel’s resounding victory in Tunis brought about the longed-for results, much like the victories that preceded and followed it. In my opinion, the most important statement in Monday night’s broadcast came from Ami Ayalon, who is still considered one of Israel’s greatest advocates of peace. He said, “Israel knows how to invest endless time and energy in planning how to kill, but no time and energy in considering who to kill and why, and what the long-term implications will be.”

The assassination of Abu Jihad didn’t stop the first intifada, which broke out just a few months earlier. If anything, it aggravated it. Nor did terrorist attacks disappear after that. In fact, the exact opposite occurred. Suicide bombing began eight years after the assassination. Abu Jihad was an authentic Palestinian leader, and a charismatic one, too. He was considered to be the most powerful man in the movement after Arafat. He was bold and creative, but he also knew how to be pragmatic and to adapt himself to changing circumstances. When Arafat died, the question was raised as to whether Israel would succeed in finding a new address to turn to in its efforts to achieve peace. Will an heir emerge? Will it be possible to build up an alternative partner, who understands the importance of peace and is capable of making historic decisions, but who can also provide the goods and bring the Palestinian people, with all its different factions, into the deal?

Palestinian Chairman Abu Mazen stepped into Arafat’s large shoes and became the official partner. He abandoned terrorism and believes in peace. Today, however, it is quite obvious that Abu Mazen cannot deliver. He lacks the strength to make the decisions, and he hardly represents the entire Palestinian people, large segments of which challenge his authority. If Abu Jihad had been alive today, he would be the perfect replacement for Arafat, not least because of his status among the masses in the West Bank and also in Gaza. Abu Jihad was assassinated five years before the Oslo Accords. Yes, he was a murderer and justly deserved to be killed, but Arafat was also a murderer. He was an even bigger murderer than Abu Jihad himself. If Arafat had had the good sense to take Abu Jihad with him to Oslo, it is quite likely that we would now have a real, determined, partner who could supply the goods. Yes, this is all speculation. There is no real, factual basis to this assessment, and it could well be that it is the result of a highly developed imagination and a creative mind. Still, I think that it would have been worth a try.

Abu Jihad is gone. He was killed by Bogie (“Bogart”) Yaalon, who now invests so much of his talent, energy and creativity in proving that Israel lacks a serious partner for peace. Abu Jihad’s children, who were present at their father’s assassination, have all turned their backs on terrorism. Nidal, then 2 years old, who was sleeping in a crib in his parents’ room when Israeli fighters burst in, has completed his studies in theater arts. Hanan, who saw her father’s bullet-riddled body lying at the feet of the Israeli warriors, now has a doctorate in political science. Jihad, whose name means “holy war,” is now the governor of the Palestine Monetary Authority. Their mother, Umm Jihad, now says that there is no other option.

In the end there will be peace, and the two peoples will have to learn to live together. If only that would have been true. While we pray that it happens some time or other, this time let’s not make do with just prayers. Every so often we should put a little thought, foresight and action into it.