Progress made in the political dispute between Baghdad and Erbil has reflected positively on the economic situation in the Kurdistan Region, writes Abdel Hamid Zebari. 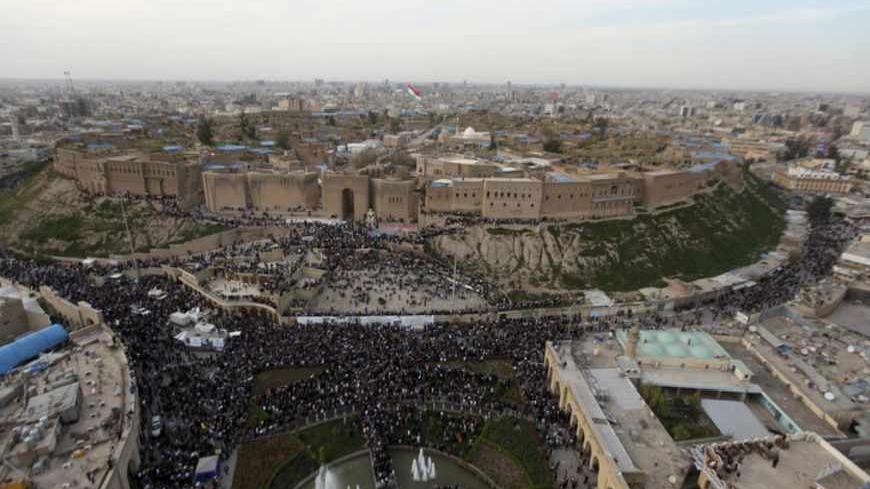 An aerial view of the city of Erbil, the capital of the autonomous Kurdistan region, about 350 km (217 miles) north of Baghdad, March 19, 2013. - REUTERS/Azad Lashkari

The economy of the Kurdistan region of Iraq fluctuates according to the state of relations between Baghdad and the Kurdistan Regional Government.

A key indicator of the region’s economy, real estate, has been sluggish but has seen a dramatic improvement in just the last few weeks since KRG Prime Minister Nechirvan Barzani negotiated an agreement with Baghdad in late April to end the boycott of the Iraqi government and Council of Representatives by Iraqi Kurdish ministers and members of parliament and cool tensions in Kirkuk and disputed areas.

The mostly stable and now improved security situation has allowed economic progress and prosperity in the Iraqi Kurdistan region. Until recently, the economy and real estate market had been in a funk. Many Iraqi families have moved away from central and southern regions of the country, in addition to Iraqis living in Syria who left following the political crisis and armed operations between the state and the opposition in order to settle down in Kurdish regions. The last dispute between Baghdad and Erbil, however, has shaken their trust in their safety.

Nariman Sadeq, owner of a real estate agency in Erbil, explained to Al-Monitor, “Lately, citizens have lost their trust in the market, and consequently real estate prices have dramatically dropped.”

Added Sadeq, “The prices of real estate in some regions of Iraqi Kurdistan have dropped by 30-40%, as the buying and selling process came to a halt a month ago.”

Sadeq, nonetheless, affirms that the market has been revived once again due to news about improved relations between Erbil and Baghdad. Sadeq expects an economic boom in the near future. “Earlier, properties were put on the market, but no one wanted to buy. Currently we see activity and signs foretelling an improvement in the market.”

Sadeq attributes the improvement to the detente between Erbil and Baghdad and the decision made by both parties to revive their former, amicable relationship.

A significant number of middle-income citizens in the Kurdistan region invested most of their money in the real estate market, which witnessed skyrocketing growth and a rise in prices, encouraging many others to follow suit.

Karim Ali, the owner of a children’s clothing store and a real estate trader, stated that he has recently lost his trust in the market as prices have slumped in general and in the real estate market in particular.

In an interview with Al-Monitor, Ali added, “Now, we feel as though market activity has started to pick up again.”

Ramadan added, “Investment does not prosper in areas rife with uncertainty and instability, whether economic or political. This explains the market’s downturn, particularly that of the real estate market.”

Ramadan believes that the most influential clause regarding the economic sector in the agreement concluded between Erbil and Baghdad is the one that concerns the amendment of the law on the 2013 general budget.

“As the federal government pays out the dues of foreign companies working in the region through amending the budget’s law, a suitable environment will be set for investment companies, which will usher in an economic boom on the investment as well as production level,” Ramadan explains.

Ramadan stresses that ending financial disputes between Baghdad and Erbil will send a reassuring message to citizens to practice their trades and continue with economic activities. “This means that more liquidity will be pumped into the market, since the Kurdistan region’s budget constitutes a part of Iraq’s general budget.”

The region gets a 17% share of the general budget, a share that was specified in proportion with the population of the three Kurdish provinces of Dohuk, Sulaymaniyah and Erbil.

Statistics issued by the General Investment Commission in the Kurdistan region show that the volume of local and foreign investments in the region since 2007, when the law on private investment was issued, reached $26 billion, mostly in the oil, construction and real estate sectors.

The last agreement between Erbil and Baghdad stipulates setting up a joint committee to settle the oil and gas dispute on the basis of a previous agreement concluded in 2007 between both parties, the amendment of the 2013 budget law and solving the issue of the Tigris, Nineveh, Jazeera and Badiya Operations Command.