Nearly a month after the deadly attacks on protesters by internal security forces in the town of Hawija, Iraq’s judiciary investigates the events and the people involved. 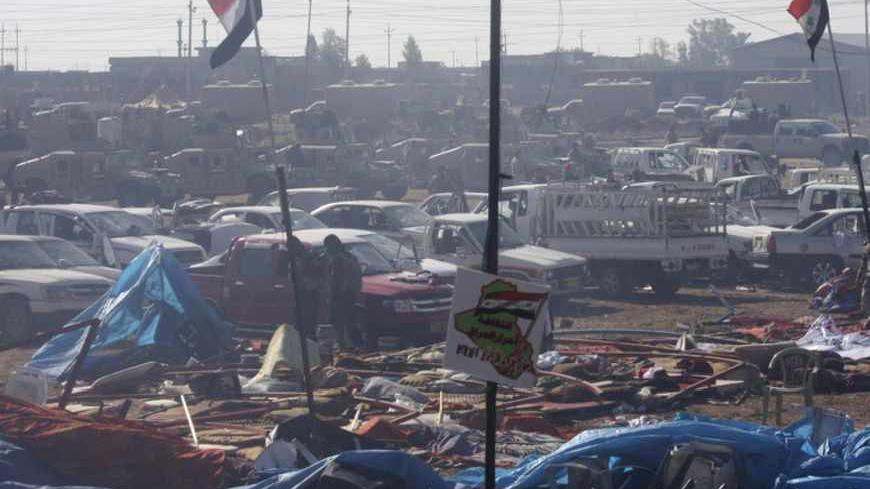 Nearly a month following the bloody events that took place in the town of Hawija, the Iraqi judiciary has decided to investigate the circumstances surrounding the events, just as it has adopted the Iraqi Council of Representatives’ report on the circumstances of the Iraqi army’s attack on the protest square in the city.

The Iraqi general prosecution, which is a body of the Iraqi judicial authority, announced on May 13, 2013, the formation of an independent inquiry commission to look into the events of Hawija, and the transfer of the case to the Kirkuk province.

The prosecution’s decision means that the investigation will not occur in the capital, Baghdad, but rather in the province to which Hawija administratively belongs.

Members of the special forces stormed the protest square in Hawija on April 23, 2013, leaving at least 163 protesters dead and wounded. Hundreds of others were either arrested or went missing. The Defense Ministry justified the attack on the protest square by saying that it happened after protesters failed to obey orders to leave the square, and after gunmen in the square opened fire.

The Iraqi general prosecution said in a statement, which Al-Monitor received via email, that, “It established an inquiry commission to examine the events of Hawija. The commission consists of three judges and a general prosecutor who will investigate this case.” It also noted that “the court of appeals in Kirkuk will serve as the commission’s headquarters.”

The general prosecution confirmed having “sent the investigation file — which was received from the House of Representatives — to the judiciary, to be added to the papers submitted to the investigative court in Hawija, in order to take the necessary legal procedures.”

The Iraqi Front for National Dialogue, led by prominent Sunni politician Saleh al-Mutlaq, had confirmed that the International Council for Human Rights accepted the request it submitted, backed by evidence, to form an international inquiry commission to investigate the events of Hawija, classifying it “a collective massacre,” MP Haider Mulla said in a press conference attended by Al-Monitor.

Sunni MP Mohammed al-Khalidi revealed that the Parliamentary Legal Committee is considering the possibility of submitting the Hawija events to a parliamentary vote to be considered “a massacre.”

Khalidi said in a press conference, attended by Al-Monitor’s correspondent, that the “parliamentary committee on human rights gave the report on the events in Hawija to international organizations to be examined; however it has not yet spoken to international courts competent to judge in crimes of genocide.”

In contrast, a political source said that “the House of Representatives’ report on the events of Hawija included testimonies by MPs who attended negotiations between the Iraqi military and protesters there, in addition to videos taken by Iraqi soldiers while filming the protest square after the attack.”

The source, who spoke on condition of anonymity, said in a statement to Al-Monitor that “the Iraqi judiciary found a lot of information that must be submitted to investigators in the province of Kirkuk in the report.”

YouTube videos — which their owners said had been leaked from soldiers who filmed the protest square after the attack — showed corpses of dead protesters who had been carrying sticks, and others still alive.

It appeared that the videos were recorded with a mobile phone camera belonging to a soldier involved in the attack. One of the videos showed another soldier beating the head of a body lying on the floor with his shoe.

Maysoon al-Damluji, an MP from Ayad Allawi’s Iraqiya bloc, said that it is hard to know what happened in the town of Hawija, except through videos leaked by soldiers to social networking sites.

Damluji explained in her lecture on the freedom of the press in Baghdad, which was attended by Al-Monitor’s correspondent, that “the authorities controlled the information associated with the Hawija incidents, and tried to restrict them to Iraqi journalists.”

In the same town where the attack took place, the residents are prepared to file complaints to the Iraqi judiciary in the province of Kirkuk. Sunni MP Ahmed al-Masari — in a statement over the phone to Al-Monitor’s correspondent — called on the residents to file their complaints with the inquiry commission set up by the prosecution, and warned of any interference by the military or political forces in the work of the judiciary.