"Red Hat" circumvents restrictions on freedom of speech to critique Iranian government policies that have led to serious economic problems. 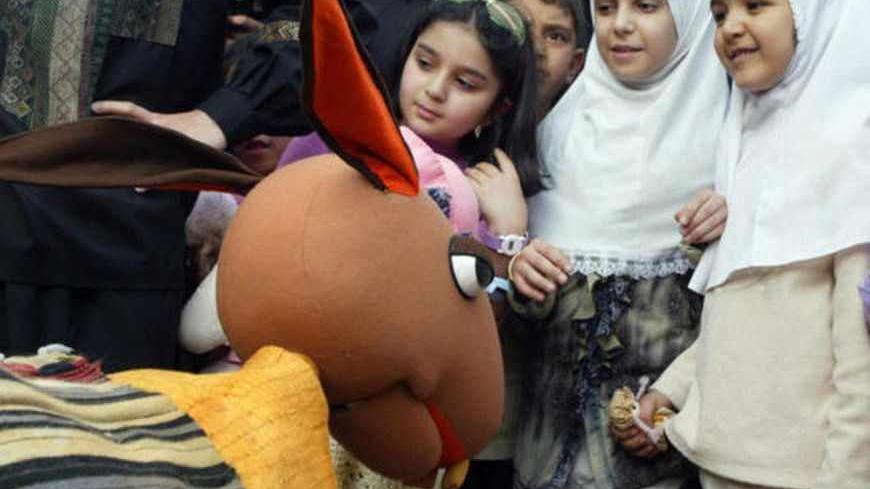 Iranian girls gather to watch a puppet show during a festival to mark world puppet theater day at the Iranian House of Artists in Tehran, April 23, 2004. - BEHROUZ MEHRI/AFP/Getty Images

A television program that stars a puppet called "Red Hat" is creating a stir among Iranian viewers this election season, touching on sanctions, inflation, lack of free speech and other topics of great sensitivity in the Islamic Republic.

The show debuted 23 years ago, during the early months of Hashemi Rafsanjani’s second term as president, and quickly became a favorite for Iranian viewers. The puppet, named for his red headgear, represents an orphaned village boy who comes to Tehran in search of a friend and gets into all kinds of mischief. The friend, the host of a kids’ television show, is known simply as Mr. Host. Red Hat, who lived with his grandmother in the village, used to watch the show at a TV repair shop. Mr. Host became Red Hat’s idol and he decided to come to Tehran to meet him.

During the Rafsanjani presidency, a joke circulated widely: Supreme Leader Ayatollah Ali Khamenei summons Rafsanjani and asks him why so many Iranians are imitating Red Hat’s nasal voice. Rafsanjani replies in the same voice, having also succumbed to Red Hat’s influence.

The puppet behaves like any little boy, kicking a soccer ball in alleys as young Iranians do and getting into trouble. Once, he accidentally drank vinegar and ended up sticking his head in the freezer.

Red Hat vanished from Iranian television screens for 17 years. He then starred in a movie that became a hit, and a few years later had another box-office success, but did not return to TV until four years ago, when he reappeared in a special series for the Iranian New Year, Nowruz. He has been delighting audiences for these past four springs. This time around, he has plenty of puppet buddies.

Given the strict controls over the arts in the Islamic Republic, writers and filmmakers have had to learn how to maneuver around the barbed wire of censorship and take refuge in metaphors and allegories.

This year, as restrictions on the press have tightened in advance of June 14 presidential elections, the program has been filled with political references.

Red Hat has commented on the P5+1 talks — the nuclear negotiations that include the five permanent members of the UN Security Council plus Germany — asking, “Were they absent during math? Why not just call it 6?"

The puppet show also touches on sanctions, inflation and censorship, the latter represented by a donkey called Darling who has duct tape clumsily slapped over his mouth.

While the use of puppets in political satire is nothing new — Great Britain has “Spitting Image” and Israel is also known for its puppet shows, especially in election years — Red Hat and his friends and relatives are not political figures. Nevertheless, their scripts lampoon the hardships Iranian society is experiencing.

In this season’s premiere, Red Hat and his friends hold a garage sale. They set up stalls and offer some of their belongings at what are supposedly discounted prices. Mr. Host’s old pair of smelly socks are among the items for sale. The puppet vendor, a former doorman, points out the holes in the socks, but says they are good for breathing, serving as “doors” for society. When a potential buyer expresses interest, the vendor asks if he is certain he wants the merchandise. The buyer hesitates, saying, “Well, it depends on the price.”

The seller brings up economic sanctions and adds, "You know, I need to call my contacts in the currency-exchange business. We are forced to price our merchandise according to what it is worth in dollars. If I don’t double-check the price of the dollar, I may not be able to replace the item tomorrow. The value of the rial changes every second. I can’t take a risk like this.”

The program also touches on societal taboos in what is ostensibly a country governed by strict Islamic law. Darling the donkey has long bangs covering his eyes, suggesting that he is effeminate and homosexual. His name is also controversial, as it is a word of endearment rarely used outside of a romantic relationship. The puppet’s appearance last year on several episodes sparked controversy and even the rumor that he had been forbidden by the government to return to the show. This year, accordingly, he returned wearing duct tape over his mouth. The other puppets said Darling had said things he shouldn’t have said, so he was being punished.

Red Hat’s friends also recite poetry intertwined with everyday speech, and they dance — or at least get as close as they can to dancing without incurring the wrath of religious censors.

One of the puppets is a thoughtful lamb who struggles to show that he is not like ordinary sheep, who are mere followers. This lamb reads, teaches himself English and makes tangible intellectual progress. He is also a vegetarian and a strong believer in fitness, using a vibrating belt to exercise. For dinner, the puppet nibbles at a dictionary.

One of the funniest characters in the show is the puppet of a middle-aged man who dresses sharply and is very polite. Meant to represent ordinary Iranians who soldier on despite their woes, he teases himself and pokes fun at endless and exaggerated troubles.

The program elevates survival over conflict, a message that resonates at a time when so many Iranians are struggling just to survive. For now, the Iranian government appears to feel that the diversion offered by Red Hat outweighs its critique of the troubles Iranian policies have caused.

Mehrnaz Samimi is an Iranian-American journalist.