Iran’s business community considers the presidential candidates and the future of Iran’s economy. 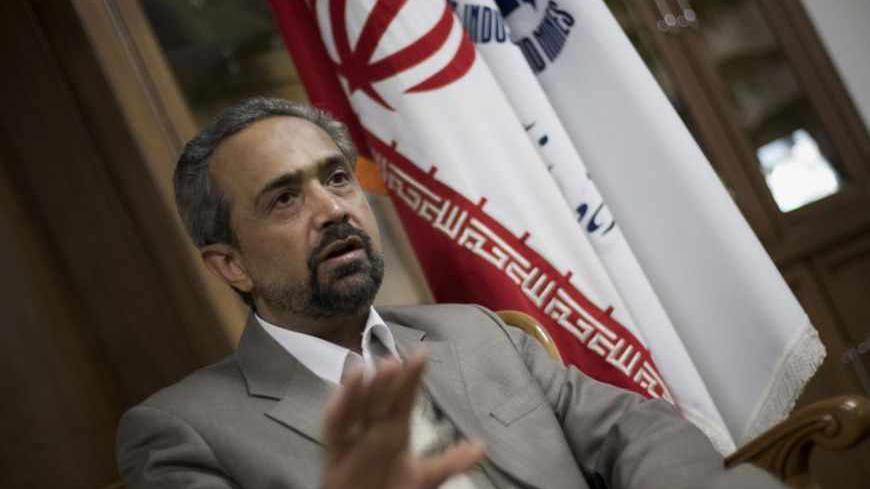 Mohammad Nahavandian, head of Iran's Chamber of Commerce, speaks during an interview with Reuters in his office in Tehran February 20, 2010. - REUTERS/Morteza Nikoubazl

It's no secret that Iran’s private business community has been suffering as a result of political uncertainty, sanctions and economic mismanagement. The latest public outcry came in early May, when the Coordination Council of Professional and Engineering Guilds issued a statement criticizing the “diminishing space for the private sector” and asking the political decision-makers to liberalize the political sphere for greater participation of the private sector in key economic and trade decisions. The communiqué concluded by stating: “We will endeavor to promote the active participation of NGOs in national policy-making and believe that all politicians and government representatives should pave the way for an active role by entities like us.” This entity includes 16 major guilds in various technical, infrastructure and construction subsectors, with some 40,000 companies as members.

Sentiment is very similar among other guilds and industry associations; the timing of the aforementioned statement was certainly not a coincidence. Evidently, representatives of Iranian industry see an opportunity to support those presidential candidates who are more likely to liberalize the Iranian economy. From the perspective of the business community, there are three distinct layers and phenomena that make the upcoming elections significant:

First is the impact of the next president on the economic well-being of Iranian society. Continued economic hardship would clearly undermine market potential, to the detriment of Iranian businesses. Second is the need to redefine state–society relations in economic terms (issues such as subsidies, how to utilize petroleum wealth, social security, etc.). Third is the more dominant role of economic interest groups—as opposed to ideological and political interest groups—within the constellation of power. There are a growing number of institutions (not just the IRGC, but also a large number of revolutionary, religious and military foundations) that are competing for control of the country’s economic resources. This is why the genuine private sector continues to be concerned about the attitudes of the next government towards the semi-state institutions.

So far, the roller coaster of nominations and vetting of candidates has led to fluctuations in the mood of the business community and their optimism about the post-Ahmadinejad era. In fact, the brief period of hope for another Rafsanjani presidency had generated some momentum in the Iranian business community, but after Rafsanjani’s dismissal there is a concern that the hard-liners’ grip over the country’s political and economic scene will further be consolidated through the upcoming election.

However, this does not mean that the business community will stop looking for ways to influence policy decisions. In the early phase of nominations, there was even one potential candidate who represented the traditional business community: Yahya Ale-Eshaq, president of the Tehran Chamber of Commerce. However, he withdrew in favor of other conservative candidates. In another interesting development, leading presidential candidate Ali Akbar Velayati has invited Mohammad Nahavandian, president of the Iran Chamber of Commerce, to lead his “committee on economic affairs,” hinting that Nahavandian may become part of Velayati's future cabinet, should he be elected.

Even during the difficult Ahmadinejad years, the private sector never stopped lobbying. Under Nahavandian's leadership, a forum was created under the banner of “Dialogue Between the Iran Chamber of Commerce and the Government.” This forum included Nahavandian and other high-level representatives of the private sector alongside key ministers (Ministers of Finance, Commerce and Industry, Agriculture, Petroleum, etc.). Through such lobbying, the private sector secured a number of concessions in trade and economic policy, especially concessions on promoting local industry. In March 2013, Ayatollah Khamenei signed a decree on “General Policies on Domestic Production and Protection of Iranian Labor and Capital” that was a product of the above-mentioned lobbying. Nonetheless, there are two issues that concern the true private sector: On one side, the semi-governmental sector will also benefit from these decisions and, under normal circumstances, they have a better access to government resources and licenses. On the other side, inconsistency and a lack of continuity are the main recurring problems that undermine the private sector, even after meaningful laws are passed.

When analyzed from the viewpoint of the private sector, most of the remaining candidates lack a grand strategy for the country’s economic development. Regarding economic policy, they mainly engage in two types of debate: 1) how they distinguish themselves from Ahmadinejad and, 2) how they can put the economy back on track to achieve the objectives of the 20-Year Plan (Iran’s Vision 2025, which sets the goal of becoming the region’s economic and technological powerhouse by 2025). There is also a long list of criticism on what Ahmadinejad should have done differently (from his failed approach in dissolving the Management and Planning Organization to foreign exchange policy, etc.). On specific issues such as subsidy reforms, there are more concrete statements by the candidates, but most of those statements sound like campaign propaganda as opposed to actual strategies.

Essentially, only two candidates have created comprehensive documents on the future management of the economy: Mohsen Rezai, who plans to create a system of “economic federalism” by empowering the provinces to take over more economic responsibilities, and Mohammad Baquer Qalibaf, who has a broader vision of Iran’s position in the global economy based on a concept he calls “positive competition” inducing a new sense of integration into the global economy. His program also refers to a more “expertise-oriented” management of the economy. Furthermore, Valayati’s inclusion of Mohammad Nahavandian on his team will be perceived as a positive step.

One central issue that the private sector is worried about is corruption and mismanagement. However, none of the candidates have put forward any meaningful plans on how to manage the current levels of corruption. It is more of a slogan; all candidates want to assure everyone that they will fight corruption and introduce better management approaches.

Undoubtedly there are plenty of challenges, and it will be difficult for the new president to focus on demands from the private sector. However, statistics show that the private sector is the main provider of new jobs in the economy, hence the need for a greater level of attention to their expectations. The next president will therefore have to develop a new approach to subsidy reforms, contain the negative impacts of corruption and mismanagement and ease external tensions with the objective of securing some sanctions relief. With regards to the subsidy reforms, as a first step, the next administration has to shift to non-cash compensation for the lower income classes. This way, some of the inflationary impact of the subsidy reforms can be managed. Even the planned support for the industry can happen through tax relief and non-cash facilities so that one can contain the impact of these policies on money supply. Another important step would be for the next government to make a genuine effort to give independence to the Central Bank and its monetary policy. A third step will concern how the administration can delineate the governmental, semi-governmental and private sectors. It is a fact that the private sector will not materialize its full potential as long as it is squashed between a powerful government and a growing and bullying semi-governmental sector consisting of revolutionary, military and religious foundations and organizations. It will also be important to develop a sustainable set of laws and regulations for the country’s investment climate. In fact, the most disturbing factor during the Ahmadinejad years has been the sense of insecurity that the private sector felt extensively.

In essence, there is a long list of expectations, but there are also potential solutions. The key will be in the government trying to depoliticize economic decisions and the management of the economy, which would be a first for the Islamic Republic of Iran. If not, the private sector will look for new ways to influence the policy debates and push for reforms.

Dr. Bijan Khajehpour is a managing partner at Atieh International, the Vienna-based international arm of the Atieh Group of Companies, a group of strategic consulting firms based in Tehran, Iran. Khajehpour completed his graduate studies in management and economy in Germany and the UK and his doctorate of Business Administration at the International School of Management in Paris.