After Hassan Rouhani's victory in the Iranian presidential election, he stated that reducing Iran's unemployment was among his main goals. With Iranian unemployment at 12.5%, the president may need to enlist the help of the private sector. 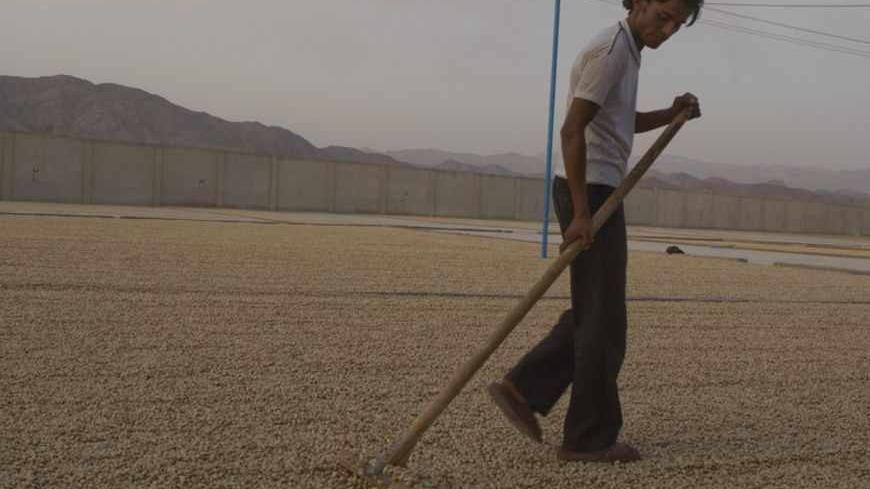 A worker spreads out pistachios in the sun at a processing factory in Rafsanjan, Iran, Sept. 23, 2008. - REUTERS/Caren Firouz

The Iranian people have elected Hassan Rouhani in the hope that his government would reverse the failed economic policies of the Ahmadinejad years. President-elect Rouhani understands the challenges ahead and has stated that his administration will develop and implement short and medium-term plans to reverse the current economic trends. He has also declared that fighting unemployment will be his top priority.

However, it is clear that in its bid to promote employment, a Rouhani administration will face many restrictions. This article will focus on Rouhani’s stated top priority of job creation and assess expectations of how a Rouhani government will reverse the country's unemployment trends.

Before analyzing the actual challenge, one needs to appreciate two important parameters in the emerging Rouhani government:

Job creation will be significantly facilitated by the private sector's confidence in this moderate cleric and his team. One should also not underestimate the effort by the Rouhani team to include private sector representatives in the campaign and potentially to appoint the current president of the Iran Chamber of Commerce, Mohammad Nahavandian, as the new minister of industry and trade. The positive mood could also be captured in a statement by the veteran merchant, Habibollah Asgaroladi who said: “The country has not witnessed this level of calm for more than 20 years!” Obviously, the Iranian business community will benefit from a period of political stability and legal sustainability that a Rouhani government seems to promise.

New investments by the country’s private sector will certainly have the potential to reduce unemployment. According to a 2012 study, some 81% of new jobs that year were created by the private sector. However, one needs to understand the larger context of the Iranian job market.

Generally, Iranian companies are under pressure to sustain their economic activity levels due to multiple challenges, including subsidy reforms, external sanctions, inflationary pressures and the government’s failure to settle subcontractor invoices. By official accounts, the government owes some $5 billion to private sector companies, on top of the billions owed to Iranian banks. Furthermore, the privatization process has had a negative net effect on employment in the country. Therefore, the new government cannot just rely on the positive sentiments of the private sector. A lot more will be needed to create sustainable jobs in an economy that has been weakened.

In the medium term, the new administration could rely on a number of initiatives that could pave the way for job creation, such as the promotion of tourism; targeted job creation schemes in select economic sectors, like agriculture; and the expansion of regional export markets, something that the outgoing government neglected, as it was more focused on remote South American markets.

In line with the general objective of engaging the private sector, Rouhani has repeatedly mentioned his plan to implement the “Law for the Continuous Improvement of the Business Environment,” which calls for the complete overhaul of all business-related laws and regulations. Incidentally, the Majlis passed the law, but it was never implemented by the outgoing administration. Once implemented in due course, the country’s private sector should be able to operate more freely as all parallel laws and outdated regulations would be removed. Evidently, if Mohammad Nahavandian (the brain behind this law) becomes a key player in economic policy, one can expect some positive movements in promoting private sector investment.

Another important parameter in providing the private sector with an investment-friendly environment is to contain inflation. Also here, Rouhani will inherit a set of processes and policies that cannot be easily reversed, such as subsidy reforms, high liquidity and currency devaluation). These phenomena will continue to produce inflationary pressures. However, the new team has produced some approaches that could ease the situation. The key instrument in managing the inflationary impact produced by subsidy reforms and currency devaluation will be a tight control over the growing money supply. The Rouhani team has already stated that they will revamp the cash handouts by shifting some funds from higher to lower income groups and also that they will focus on non-cash instruments. Furthermore, the president-elect’s pledge to grant a higher degree of independence to the Central Bank of Iran will be important in decoupling monetary policy from economic decisions.

Sanctions relief will be another significant step in realizing the Iranian economy’s real potential for job creation. However, the new government’s ability to achieve short-term positive results in the field of sanctions will be hampered by internal and external realities.

Finally, the new government will need to address issues related to administrative and financial corruption if it wants to attract significant private sector investments. Undoubtedly, fighting corruption will require a long-term approach and it will be difficult to expect a quick turnaround in this field. However, a potential short-term measure could be to induce greater transparency as to how government tenders are awarded and also how business licenses are issued. In fact, the implementation of the above-mentioned law could pave the way for a growing role of NGOs, such as guilds and industry associations, to take over such tasks.

Despite the good will and positive sentiments of the Iranian private sector, it would be a mistake to expect a major boost in job creation in the short term. In fact, unemployment will not disappear from the Iranian economy for the foreseeable future, mainly due to the country’s young demography. However, the society as a whole can absorb the negative consequences of unemployment much better if the overall economic outlook remains positive.

The combination of new personnel and new initiatives could pave the way for more jobs, but it will come at a slower pace than expected. President-elect Rouhani stated during his press conference that he would celebrate his election success when unemployment dropped to single digits, down from the current 12.5%. Well, we may have to wait a few years for that celebration!