Israel is reconsidering its new strategic approach to the region in the context of US policies toward Iran, Syria, Egypt and Israeli-Palestinian peace, writes Ben Caspit. 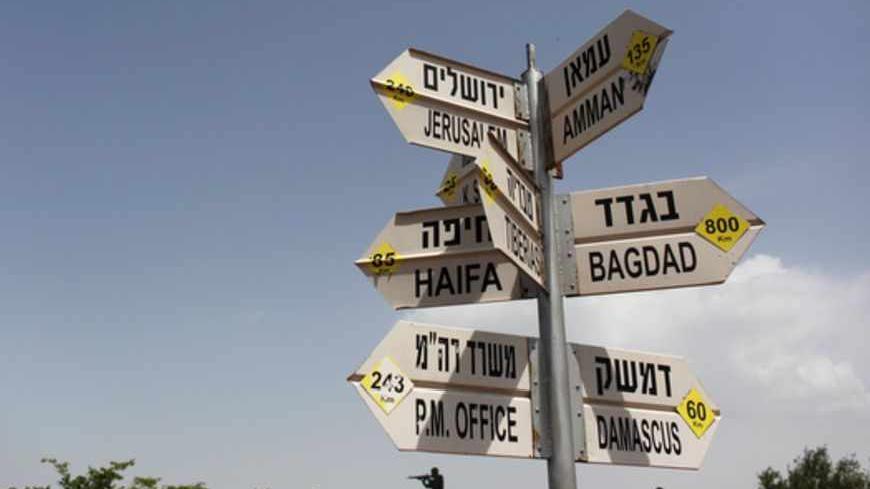 A sign post near Kibbutz Merom Golan in the Golan Heights shows the distance from Israel's northern border to other destinations, May 2, 2013. - REUTERS/Nir Elias

After a round of talks with several high-ranking officials in the Israeli defense establishment, we can begin delineating what’s happening between the pillars of smoke billowing above the Middle East, what the US plan is, what Israel will (or won’t) do and where US Secretary of State John Kerry wants to steer this rickety cart. Below are several key insights:

“I have faith in President Barack Obama,” said a high-ranking defense official in Tel Aviv this week, when referring to Iran. According to him, the president’s need to prevent a nuclear Iran is equal to — if not greater than — the Israeli need. The United States created a “security peace” in the Middle East that encompasses all the countries under threat, including the United Arab Emirates, Saudi Arabia, Qatar (at times), Jordan, Egypt (at least the defense establishment), Turkey and Israel. This is an unofficial but stable alliance built upon common interests.

There is no such creature as an Arab who will tolerate an Iran with a nuclear bomb. And there is also no such creature on this planet as a Sunni who will agree with being faced with a Shiite bomb with no countermeasure in place.

The Americans know full well what will happen the day after Iran gets a bomb. This alliance will collapse. The Saudis will spend as many billions as it takes to buy ready-made nukes from Pakistan. After all, they have been investing billions there for a long time now. Egypt, Turkey and even the Persian Gulf states cannot remain indifferent. The Middle East will turn into a giant nuclear reactor. Obama knows that this cannot happen, and he will not let it, whether through diplomacy or force.

The Americans know how to do what Israel does not, even at the last minute. They have bunker-buster bombs that can even penetrate the Fordow facility. Today, around the Gulf, they have between 40 and 50 powerful war vessels. As far as they are concerned, the mission is possible, and the price is reasonable. True, we Israelis have different red lines from the US. Obama’s red line means an Iranian Shahab missile equipped with a nuclear warhead. For us, the red line means enough enriched uranium in stock to place Iran within three months of a bomb. The Iranians aren’t there yet; Western deterrence has delivered the goods so far, but the coming months will be decisive.

Here too, the red lines are different. For the United States, as the leader of the free world, the red line is the use of chemical weapons of mass destruction against civilians. For Israel, the red line is weapons of this type falling into the hands of Hezbollah or terror groups among the Syrian rebels. Israel is not the leader of the free world, and it is not its job to educate recalcitrant rulers who cross the lines. However, Israel is responsible for ensuring its own security.

For Hezbollah Secretary-General Hassan Nasrallah to become empowered by chemical weapons is a strategic change in the power relations and a tangible threat to the safety of the people in Israel. It won’t happen. No way, and not at any price. Even al-Qaeda or global jihad elements that obtain chemical weapons will hear in real time from Israel or from its aircraft. Until then, Israel is washing its hands of the bloody insurgency in Syria, becoming increasingly vigilant, investing in intelligence and waiting.

“At this point,” said a senior Israeli defense official, Syrian President Bashar al-Assad’s "chemical weapons are secure and under complete control.” Assad isn’t stupid. He knows what it would mean to lose these weapons, or even part of them, and he is investing everything he has left to protect them. Israel is watching closely.

US Secretary of State John Kerry’s plan is to promote the “security peace” and the Sunni alliance plus Israel, which is taking shape against Iran and the extremist elements in the region. It is to create a coalition of 4+1 or 5+1 (Egypt, Jordan, Saudi Arabia and the Emirates, plus non-Arab Turkey) that will run in parallel with the Israeli negotiations with the Palestinians and will advance it with public backing, strengthen it from the inside and provide financing. The role of this coalition will be to hold the Palestinians’ hand, to help Israeli leadership market the process to the public and obtain the financial backing required to construct the future Palestinian state.

The ratification and upgrade of the Arab peace plan earlier this week on April 29 in Washington was the first step. It was met with a weak but encouraging response from the Israeli prime minister’s office, but immediately afterward, an Israeli settler was murdered in the territories by a terrorist, and Prime Minister Benjamin Netanyahu returned to his old ways and well-known mantras. Now we are expecting another gesture from the Arab League, perhaps on the refugee issue. Then, Kerry will need to present terms of reference for negotiations. They will deal with the issues of borders, defense and the identity of Israel as a Jewish state, and will be based on Obama’s speeches during his previous term, particularly his speech at the State Department.

These terms of reference will come from the United States, and therefore Netanyahu won’t have to adopt them or sign off on them at the outset. Kerry is determined to go for a final status agreement, and not an interim agreement, and honestly believes there is a window of opportunity for this to happen immediately. Soon he will face the same reality all of his predecessors did. It will be interesting to see if he will succeed. For that to happen, Netanyahu will need a new coalition, and perhaps even a new personality and patron. (Sheldon Adelson won’t like it).

There are currently four or five different nations that fall under the definition of “Egypt.” We have the Egypt of the Muslim Brotherhood, which is falling apart, going bankrupt, helpless. We have the Egypt of the revolutionary liberals who keep demonstrating, protesting, hoping. Then there’s the Egypt of the peasants, who make up the majority of Egyptians, and the only thing they really care about is who will provide for their families. And then there are the military and intelligence establishments. That Egypt, run by the defense establishment, has a close relationship and cooperates with Israel, no less than during former president Hosni Mubarak's era — perhaps even more so. Wisely, Egyptian President Mohammed Morsi allows his military generals some freedom of action and is not trying to force a disconnect.
Egyptian officials do not refer to Israel by name and do not engage with it at all, not even phone calls. That’s their divine order. The Muslim Brotherhood, by definition, will never be able to shake a Zionist’s hand. What Brotherhood members yearn for, by religious law — and have since their inception — is an Islamic caliphate. However, since they also need to earn a living, support a country with 85 million mouths to feed, impose control over the Sinai and maneuver in an impossible situation, they play tag. The relationship with the Zionist entity only plays out with a very long stick, namely the army, and this way they can reap the benefit of the relationship but remain clean. Bottom line: As far as Israel is concerned, that’s just fine.