The Gap Between the US And Israel on a Nuclear Iran 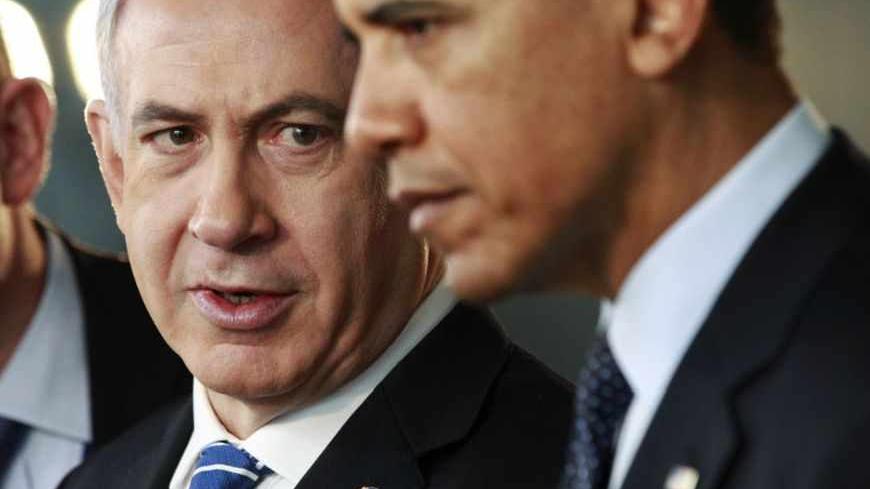 “We’re not bluffing,” President Barack Obama declared to Prime Minister Netanyahu during his recent visit to Jerusalem on March 20. “We’re not bluffing,” has become the American refrain during every dialogue with Israelis, no matter what the level. Trust us. It’s true. I went into greater detail about this in an earlier article I published in Al-Monitor, which covered the main points of American-Israeli discussion about this during the president’s visit to Jerusalem.

Those experienced old foxes from Israel’s defense establishment and diplomatic service, who keep close tabs on events, drew my attention to one interesting fact. It certainly is possible that Obama was telling the truth, when he assured Netanyahu that he’s “not bluffing,” even if he actually was bluffing, to himself and to us. It all has to do with the precise definition of how each of the parties defines their respective objectives when dealing with Iran.

And Obama? All that he cares about is that Iran doesn’t actually possess nuclear weapons (i.e., missiles armed with nuclear warheads) during his watch.

There is a lack of congruence between these two objectives. Some in Israel even contend that they stand in conflict. Experienced Israeli observers who are intimately familiar with the situation will tell you that what Obama wants to achieve is some kind of agreement with Iran, which will allow it to remain a country “on the threshold” of attaining nuclear weapons capabilities. If that happens, Iran will not cross the Rubicon. It will not obtain the necessary amount, in kilograms, of fissile material to put together the bomb itself, but it will bring itself to a stage in which it needs just a few weeks, and not months, to press forward toward that finish line.

Once it reaches that stage and makes the final decision, it will be unstoppable. There will be very little time left. The window of opportunity will be significantly reduced. All it would take is a change of administrations in Washington, temporary complacency by the intelligence community, or war or even tensions elsewhere for the Iranians to take advantage of the brouhaha and finish developing their nuclear arsenal before the West has a chance to respond. If that happens, they will have nuclear weapons. Let’s see who does anything once that happens.

Within that context, Prime Minister Benjamin Netanyahu scored a “goal against himself” in his famous “Red Line” speech on Sept. 27, 2012, to the United Nations. He gave the Americans, but also the Iranians, a very precise idea of what his red line is, in terms of enriched uranium. He insisted that it must not be crossed and, in fact, it wasn’t crossed. Whenever the Iranians approach that red line, they transfer their 20-percent enriched uranium to other facilities for other uses, even if this means willingly taking one step backwards. In the meanwhile, however, the number of centrifuges is only increasing, and their rotation speed is only accelerating. These are two critical factors that have a direct impact on the amount of time Iran needs to catch up, if and when it decides to catch up.

It is very possible that the Iranians will sign an agreement not to produce a certain amount of high-enriched uranium. Meanwhile, Obama’s term will end, and a new president will be elected. In that time, Iran will have 50,000 faster and modern centrifuges, instead of the 12,000 it has today, and the ayatollahs will be able to finish the job in just two or three weeks.

In other words, any potential agreement between the US and Iran would be a disaster for Israel and the international effort to put a halt to Iran’s nuclear ambitions. That is how many in Israel feel, unless such an agreement includes very tough restrictions, like the removal of all high-level enriched uranium from Iran, the total cessation of the enrichment program, etc. The Israelis are convinced that the chances of this happening are close to nil, while the Americans believe that this is likely to happen.

American representatives even suggested an example during their discussions in Israel, saying that even the great Ayatollah Khomeini, Father of the Islamic Republic of Iran, actually blinked and took a step back once it became clear to him that the cost he would pay was far greater than any rewards he would reap. It happened during the Iran-Iraq War, when the Iranian finally agreed to a ceasefire, effectively ending that war. Khomeini realized that continuing that war would lead his country to the brink of disaster, or at least force it to pay a price which it could not bear.

With this historic episode in mind, the Americans reason that if the West continues to apply pressure and the sanctions not only get worse but are accompanied by threats of military action, it is very likely that Khomeini’s heir Khamenei will follow his predecessor’s lead and change direction. Here too, however, there is a sharp disagreement between Israel and the United States. Jerusalem claims that this will never happen, and they have the audacity to claim that they know the Iranians much better than the Americans. The Israelis argue that the ayatollahs know that only nuclear capabilities will ensure the survival of their regime. In other words, they do not intend to retreat.

Meanwhile, back in Israel, people are talking about another missed opportunity. The presidential elections in Iran this June could have been an ideal chance to try to destabilize the regime. Had the Iranian masses, so eager to rid themselves of the dictates of the Revolutionary Guards and the Basij, seen clear incentives from the West and evidence that they would get support and aid, if and when they replace the government, the Islamic dictatorship could have been destabilized and toppled.

But this requires an initial investment. All the global corporations should be brought together and asked to make an explicit commitment as to how much money they will invest in Iran once the ayatollahs are finally deposed. One could design and broadcast and air Internet campaigns. News such as this has the potential to stir the hearts of the desperate masses in Tehran, Shiraz, and the other cities and villages of Iran. It can offer them hope. It can let them know that there is chance for something better, that there is life after President Mahmoud Ahmadinejad, and that life after Ahmadinejad can even be quite good.

The problem is that the US and Europe are both convinced that at there is no “revolutionary momentum” in Iran at present. In other words, the government is too stable. In Jerusalem, they claim that it will continue to be stable for a very long time.