Alon Ben David writes that the outcome of the nuclear talks in Kazakhstan has put the option of an Israeli attack back on the agenda in Jerusalem. 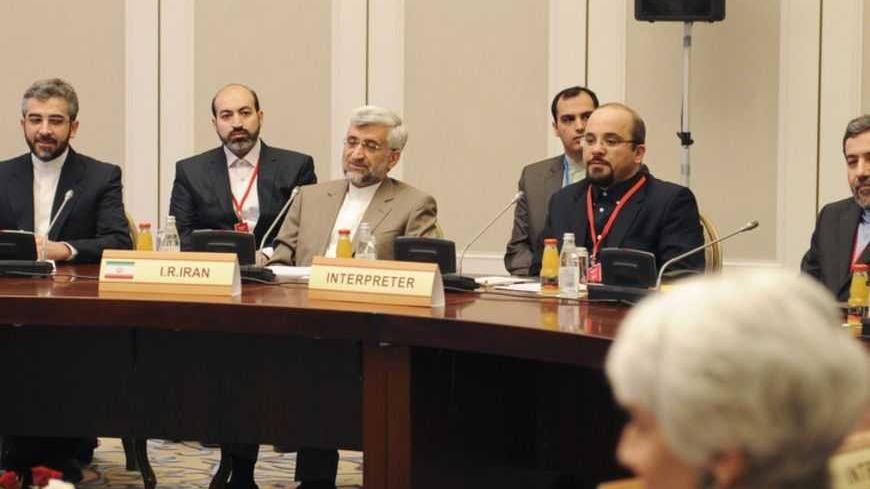 Iran continues moving confidently forward in its march toward nuclear capability, while taking care not to cross Prime Minister Benjamin Netanyahu’s “red line,” at least for now. Meanwhile, based on the talks held in Kazakhstan last week, it seems like the six world powers blinked first. Iran received a promise that no new sanctions would be imposed on it in the near future, and it wasn’t asked to give anything in exchange. If the world continues with this apparent trend to contain a nuclear Iran, Netanyahu’s new government will be forced to decide as early as next year whether the final impediment to an Iranian bomb is an Israeli attack.

The problem with red lines is that they make it quite clear to the other party in the dispute that they can do everything — except cross them, that is. Benjamin Netanyahu presented Israel’s red line at the General Assembly of the United Nations last September. He may have sketched it out awkwardly at first, but within a day the whole world, including Iran, understood that Netanyahu had set the limit at 250 kg of uranium enriched to 20%. That is the amount of uranium necessary to produce enough fissionable material to manufacture a single nuclear bomb within a short time. Ever since Netanyahu drew this line in the sand, Iran has continued moving full steam ahead to reach this point without crossing it. It has installed more and more centrifuges in Natanz and Fordow; it has increased its supply of low-enriched uranium (it accumulated 6 tons of 3.5 percent enriched uranium, which is enough for four nuclear bombs); and it is preparing to put the Arak reactor, which will enable Iran also to produce plutonium, into operation in 2014. Of its 280 kg of 20% enriched uranium, however, Iran took care to transfer 111 kg to the Research Reactor in Tehran so as not to cross Israel’s red line.

The former chief of Israel’s Military Intelligence Amos Yadlin estimates that by now, Iran can already produce enough material to manufacture its first bomb in less than six months. Based on the rate at which the new centrifuges are being installed, within a year Iran will be able to reduce that time to one month and reach what the world calls, “a breakout position”: the point at which it will take just a month to produce the necessary material to manufacture its first nuclear bomb.

With this in mind, reports coming out of the talks between the six world powers and Iran, held in Almaty in late February, are rather surprising. According to information received from two diplomats who participated in these talks, the world powers offered Iran some relief with the sanctions in exchange for reducing the rate of uranium enrichment at the Fordow facility. Until then, the powers promised to avoid imposing new sanctions, even though Iran was not obligated to give anything in exchange for this assurance.

It was no mere chance that Iran’s representatives left the talks with big smiles on their faces, declaring that the “ice was melting” in their relationship with the US, and that they were optimistic about their talks with the rest of the world. After two years of facing the six world powers as a united and unyielding front, in Kazakhstan the Iranians saw those powers blink for the first time. It seemed as if the Americans and some of the Europeans exchanged their hard line with a desire to make some “progress” in their talks with Iran, and provided de facto recognition for the continuation of that country’s nuclear program.

All of this is happening at an especially sensitive moment for Iran. The presidential elections are just three months away, and the last thing that the Supreme Leader Khamenei wants to see is the “Arab Spring” blossoming in the streets of Tehran. There is no need to denigrate the sanctions already imposed on Iran. There is hardly an Iranian who doesn’t feel their effect, and most Iranians can only reminisce fondly about the days that they could actually serve chicken with their dinner, not to mention meat. Nevertheless, the sanctions have yet to create enough pressure to force Khamenei to reconsider the country’s nuclear program. He has even less to worry about now.

It is true that Vice President Joe Biden and the new Secretary of State John Kerry both came out with uncompromising statements after the talks in Kazakhstan, and asserted that the US would not “contain” a nuclear Iran. On the other hand, America’s body language relayed a different message, and even the Iranians noticed it. The three former senators — President Barack Obama, John Kerry, and Secretary of Defense Chuck Hagel — advocate dialogue rather than the use of force, but the chances of negotiations like the ones we saw in Kazakhstan will cause Iran to stop its nuclear program are about the same as the chances that Netanyahu will sign a peace agreement with the Palestinians this year.

Later this month Netanyahu, now considerably weakened after the elections, will welcome to Jerusalem an American president determined to ensure that the US and Israel are on the same page when it comes to Iran. They both know how important it is for them to come out of this meeting with a single message, with no signs of any rifts, but the chances of that happening are slim. Netanyahu will ask for more sanctions and more subversive actions. Obama will ask for progress with the Palestinians and request that Israel does not interfere with the negotiations with Iran. All of this will be set against the backdrop of Netanyahu’s intervention in the US presidential elections. Obama is not the emotional type, but he will nonetheless find some aloof, impersonal way to settle accounts with Netanyahu. While the two gentlemen may find a way to release a joint statement publicly, it is almost certain that Netanyahu realizes that he will have to keep close tabs on America’s conciliatory proposals toward Iran and that by the second half of the year, the question of an attack will raise its head again.

Until now Netanyahu has faced stubborn resistance to the very idea of such a unilateral attack from Israel’s security chiefs. But if, as former British Foreign Secretary Jack Straw wrote, the world is heading toward containing a nuclear Iran, Israel cannot tolerate that. By next year Iran will produce at least another 3 tons of low-enriched uranium and prepare the heavy water reactor in Arak to commence operations in the first quarter of 2014. What this means is that by next autumn, even before the rain clouds gather on the horizon, clouds of war will be hovering over Israel. At that point, the same dilemma will once again raise its head: a bomb or to bomb?