While Iran is so far not part of the Israeli election campaign, Israel is still preparing for all possibilities, writes Alon Ben David. 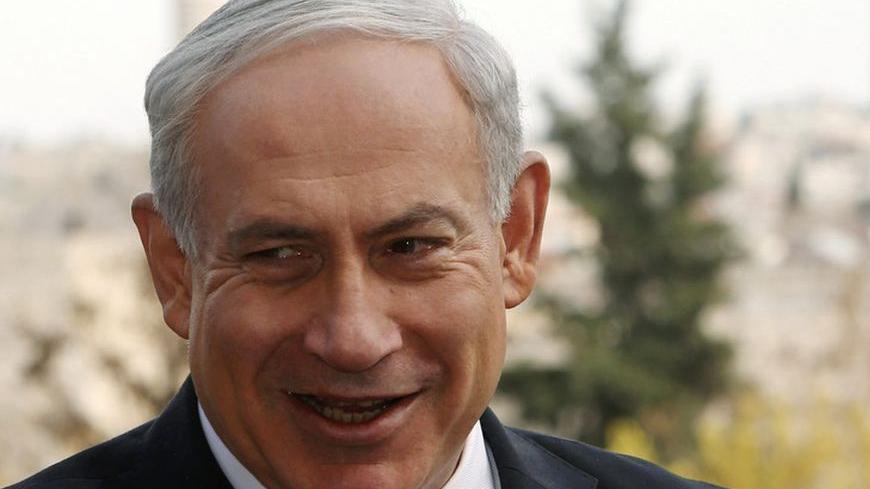 Israeli Prime Minister Benjamin Netanyahu speaks during his meeting with ambassadors to Israel from Asia, in Jerusalem, Dec. 19, 2012. - REUTERS/Ronen Zvulun

The most dramatic and acute issue that Israel's future government would have to deal with — Iran's progressing nuclear program — has surprisingly disappeared from the agenda of the Israeli election campaign. There is hardly any authoritative opposition to Israeli Prime Minister Benjamin Netanyahu on national security matters. Most candidates lack the experience and the confidence to confront Netanyahu on the question of Iran, apart from Kadima's Shaul Mofaz; but with his poor performance in the polls, he is largely ignored by the media.

Yet, the question of how to deal with Iran has not disappeared, nor diminished. It was only deferred. The centrifuges in Natanz and Fordow continue to spin, producing 8 kg of low-enriched uranium per day and a monthly average of 14 kg of uranium enriched to the 20% level. Amassing some 150 kg of 20% uranium so far, Iran is moving steadily to meet 250 kg of 20% uranium, the red line of set by Netanyahu at the UN in his speech on Sept. 27. If Iran will not once again divert part of that material for other uses, by March it will cross Netanyahu's red line, forcing him to consider his pledge to stop Iran forcefully.

While the issue is dormant in the public sphere, the Israel Defense Forces (IDF) hasn't stopped preparing for the day when the question of a strike on Iran will surface again. But the vast majority of IDF top brass have doubts whether Israel has the capabilities to stop, or even seriously delay, Iran's nuclear program.

It is fair to assume that Israel is able to identify the weak areas in Iran's program and prepare an operational plan of inflicting maximum physical damage to those parts which will be the hardest to reconstruct. But there are two things that the Israeli Air Force is incapable of denying the Iranians: the know-how that they have gained, and most of the fissile material already produced, which is highly secured. Moreover, many in the Israeli defense and intelligence community believe that an Israeli strike would only provide Iran with the perfect excuse for accelerating its nuclear program. Therefore, there are senior officers in IDF ranks who believe that Israel should replace the strike/not strike question with a new approach.

When Israel had begun to address the Iranian issue, the strategy was aimed at "denying" Iran's nuclear capabilities. In recent years, it became clear that some capabilities are impossible to deny, and Israel began to aspire to "roll back" the Iranian program, understanding that some nuclear capabilities will remain in Iran forever. But currently, looking at the progress Iran has made, there are thoughts in the IDF of developing a new paradigm, which focuses on Iranian motivations rather than on physical capabilities.

Realizing that an Israeli air-strike on Iran could result in encouraging the Iranian motivation to go on and develop nuclear weapons, the new paradigm suggests placing more efforts on international diplomacy and clandestine activity, while maintaining a credible military threat. It recognizes that military force alone, might not be a satisfying answer to the Iranian challenge.

Recognizing that the exacerbated sanctions placed by the international community on Iran are beginning to pressure the regime, the suggested new strategy calls for increasing that international pressure through more sanctions combined with covert activity, directed not only against the nuclear program personnel and facilities, but also against the Ayatollahs' regime itself. With the Iranian leadership's growing concern that an Arab Spring could erupt any day in the streets of Tehran, such a combined economic and political pressure could persuade the Ayatollahs to reconsider the nuclear program.

It is unclear whether Netanyahu, who appears to believe it is his historical mission to order a strike on Iran, would be willing to accept this new approach in his next term as prime minister. He has been suspecting the military to be hesitant and feeble when it comes to action against Iran.

In the coming months he will follow closely the US attempts to establish direct negotiations with Iran, knowing that it is highly unlikely that negotiations would produce a deal in which Iran gives up its nuclear ambitions. Then, by spring, Netanyahu will likely raise his strike plans again, hoping that the US would pledge to use its own force to stop Iran, if all else fails. But such an offer, knows Netanyahu, would come with a price tag which, with his expected even more right-wing government, might be hard to pay. Yet, if Netanyahu, or any other Israeli prime minister, believes that he is the only thing that stands between Iran and the bomb, he will order the strike.

Alon Ben-David is an Israeli television and print journalist, currently senior defense correspondent for Israel's Channel 10. He has been covering Israeli military affairs for more than 25 years for Israeli and international media outlets. Twitter: @alonbd