Controversy Erupts Over Settlement On Eve of Kerry Visit to Israel

A report from the settlement of Beit El, north of Ramallah. 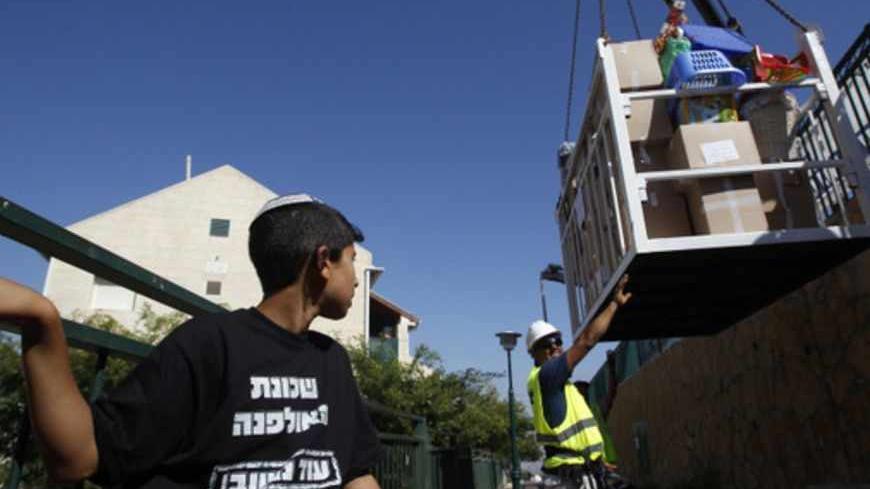 A boy watches as a crane lowers the belongings of families moving out of the Ulpana neighborhood of the Beit El settlement, June 26, 2012. - REUTERS/Baz Ratner

It’s a free-for-all in Settlers’ land, as long as you’re not a Palestinian.

The best example of this is the saga behind the request to allow a new neighborhood to be built in the settlement of Beit El, right before Secretary of State John Kerry visits the region. It is absolutely crystal clear. Our story began two years ago, when Meir Dreinoff, a private contractor from Beit El, started putting up two buildings west of the settlement, without first obtaining the proper approval. The Palestinian owners of the land sued, and the state responded unequivocally in court that the construction was illegal and that the buildings would be demolished immediately.

By the way, it is worth noting that even the settlers of Beit El were upset by these two buildings. They argued that their construction by a private contractor was illegal because it was not coordinated with the Beit El Local Council, and the buildings did not follow the master plan for the settlement’s expansion.

The privately owned land on which Dreinoff built his two buildings was confiscated by Israel from Abdel Rahman Qassam, a resident of Ramallah, over two decades earlier, in an effort to expand the military base, which lies adjacent to Beit El. At the time, the confiscation was described as a “security requirement,” but the base was never expanded, and the land remained vacant for 20 years, until Dreinoff seized it for his own purposes.

On April 4, 2012, the state committed itself to destroying the buildings. Much to everyone’s surprise, however, the court was reconvened for an urgent hearing just a few days before the demolition was scheduled to occur. This time, surprisingly, the attorney general’s office asked to postpone the demolition order.

The following appeared in the protocol of the hearing, which was held before the Chief Justice of the Supreme Court Asher Grunis:

“On April 4, 2012, the Attorney General’s office informed the court that the ‘political leadership, headed by the prime minister, requests that the issue raised in the petition be reviewed again.’ At the same time, the court was also informed that due to operational constraints, the state found it necessary to postpone the implementation of its obligation of April 2011 until May 31, 2012. In a hearing conducted before us today, the Director of the Department of the Supreme Court at the State Attorney General’s Office declared that ‘its policy remains binding’ in all matters pertaining to construction on privately owned land, and that the political leadership is requesting a 90-day extension in order to set priorities for implementing the various demolition orders pertaining to construction in Judea and Samaria.”

What really lies behind this surprising change of course by the state? The answer is quite simple.

At the time, Prime Minister Benjamin Netanyahu was facing a much more pressing issue, one which actually threatened the stability of his government. That problem focused on other illegal buildings in Beit El, or more specifically, buildings in the settlement’s Givat HaUlpanah neighborhood. The Supreme Court had ordered the state to demolish five permanent buildings in that neighborhood which lay in the northeastern part of the settlement and which were also constructed on privately owned Palestinian land. The order to demolish those buildings infuriated the Israeli right. In late June 2012, shortly before the buildings were evacuated, right-wing activists distributed a pamphlet containing instructions on how to forcibly oppose the evacuation. Those instructions included holding demonstrations in front of the homes of senior members of the security forces, breaking into Israel Defense Forces bases, blocking roads, and engaging in activities with a “price tag” against Palestinians and their property, to compensate for the loss.

Politically too, Netanyahu came under fire from the various right-wing parties, including his own. He had to do something to temper the growing ire against him, and he did. Instead of demolishing the five buildings in the Givat HaUlpanah, he asked to “saw them apart” from the bottom and to relocate them, intact and as-is, to another location. By doing so, he hoped to spare the settlers any grief they might experience from seeing those buildings destroyed. In the end, the “sawing” was actually too costly to implement. He did, however, ask to build 300 new housing units in Beit El and, in addition, to postpone the demolition of Dreinoff’s two illegal buildings in the western section of the settlement. The result of all this is that as things stand now, the Attorney General’s Office no longer supports the demand to destroy the buildings. It has changed its position entirely, and is now defending those same buildings with all the passion it can muster.

Meanwhile, contractor Meir Dreinoff can breathe much easier. Not only has this decision afforded him an opportunity to avoid any punitive measures, sources familiar with the case have informed Al-Monitor that it also provides him with a chance to avoid the bankruptcy he would have faced had those houses been destroyed. He could even make a fortune off all of this. To replace the five illegal buildings with 30 units that are part of the Ulpanah complex, and which the Supreme Court ordered to be demolished, the Israeli government has decided to construct 300 new housing units, 10 times the number to be demolished. Furthermore, the new buildings can also be regarded as illegal, at least until the Supreme Court decides otherwise. Dreinoff’s two buildings are among the 300 buildings that the state wants to see built, and he has already begun preparing the land to build another three units. He hopes that if and when the plan to construct the compensatory units is finally approved by the Civil Administration, he will receive the tender to construct the entire neighborhood.

In other words, the state is giving Dreinoff a gift. By legalizing his two buildings, it is not only whitewashing what was originally a case of illegal construction but also offering him an opportunity to build hundreds of additional, illegal units in Beit El.

Did we say that this is a gift? It’s more like winning the lottery, and Dreinoff didn’t even have to fill out a ticket.

But, as we have already mentioned, Settlers’ land follows a very different set of laws.

This is the state of construction in the territories, which lies at the center of the storm on the eve of John Kerry’s visit to the region [May 21, 2013]. The US secretary of state is doing everything he can to drag the Israelis and Palestinians to the negotiating table. As I wrote in an earlier article in Al-Monitor, he has formulated a compromise proposal that would allow Israel to continue its construction in the large settlement blocs, but would freeze construction elsewhere.

The construction of those new housing units in Beit El in no way conforms to that proposal. While it is reasonable to assume that construction on privately-owned land will once again embroil the state in a Supreme Court case, it is certain to cause diplomatic turmoil.

So how do we describe all this? Is it sheer stupidity? A callous attempt to disregard the law? Discriminatory? Pure evil? It seems as if it is all of the above, because anything goes in Settlers’ land.

The Civil Administration responds: The issue is currently before the Supreme Court. We therefore suggest that you approach the Ministry of Justice for comment.

Yesh Din (volunteers defending the rights of Palestinian civilians) responds: Dreinoff was fortunate enough to fall under the protection of the real “crime syndicate” responsible for the systematic theft of Palestinian land, i.e., the state of Israel. With its enthusiastic defense of Dreinoff’s illegal construction, the official position of the state in this case is, more than anything, an example of a commitment to the rule of law and human rights by the Palestinians.