Erdogan Denies He Is a King 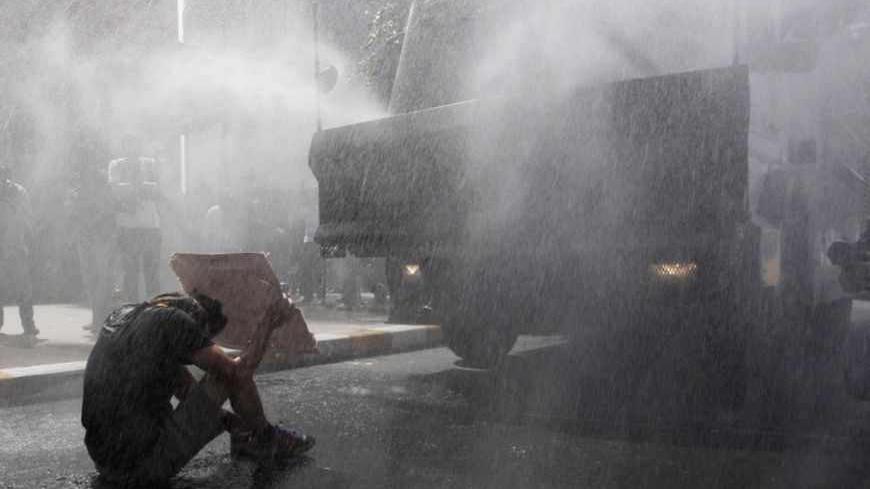 Turkish riot police use water cannon to disperse demonstrators during a protest against the destruction of trees in a park brought about by a pedestrian project, in Taksim Square in central Istanbul, May 31, 2013. - REUTERS/Osman Orsal

Prime Minister Recep Tayyip Erdogan was met by a crowd of supporters in Istanbul on May 29, during the opening of the newly restored Ottoman era “Archer’s Lodge,” chanting, “The king of prime ministers is from Kasimpasa.” That is the district where Erdogan grew up, and which is known to be one of Istanbul’s roughest areas.

“I am not a king but a prime minister elected with the nation’s votes,” Erdogan responded, according to the Dogan News agency, adding, “I am your servant, not your master.” One can understand Erdogan’s touchiness, given that his authoritarian tendencies have started to come under increasing scrutiny.

Taha Akyol, one of Turkey’s most respected political analysts who is not unsympathetic towards the AKP, and for whom Erdogan is known to have a special reverence, commented in the daily Hurriyet on May 30 on how proud he was for Turkey, during this week’s groundbreaking ceremony for the massive, $6 billion third suspension bridge that will connect the two shores of the Bosporus.

“Erdogan is very successful in areas like economic growth and modernizing of infrastructure, but I thought that as his success increases he is becoming more authoritarian,” wrotte Akyol, who incidentally is the father of Al-Monitor’s Mustafa Akyol. Citing the American political sociologist Martin Lipset, Akyol also noted that the tendency to use force increases as a politician’s term in office grows longer.

“The prime minister must avoid creating a feeling of being oppressed in sections whose lifestyles and political preferences are different,” Akyol warned.

Being likened to a king cannot have pleased Erdogan too much, of course, at a time when his Justice and Development Party (AKP) is drafting a constitution that will, if adopted, enable him to become an executive president in 2014, unencumbered by any checks and balances.

As to his being “a servant and not a master,” Erdogan’s recent remarks on a host of sensitive social issues, as well as the legislation introduced by the AKP that encroaches on private lifestyles, indicate that he is not a “servant” to all Turks, but only those who voted for him and are largely motivated by Islam.

Put another way, Erdogan — despite claiming to be introducing “advanced democracy” to Turkey — appears bent on proving that Islam is in fact not compatible with this form of government as it is understood in truly advanced democracies. His understanding of democracy appears to be no more than a crude imposition of the will of an electoral majority on those who did not vote for him.

Erdogan could not have been too pleased, therefore, on reading that Tunisian President Moncef Marzouki, who was in Turkey for an official visit this week, believes a parliamentary system of government, and not just a presidential one, can also produce a dictator.

“Habib Bourguiba (Tunisia’s first president) came to power as a single party, and when he had control of all the seats in Parliament started to act dictatorially,” Marzouki told the daily Hurriyet in an interview published May 31. According to Turkey’s secular democrats, this is exactly what is happening in today’s Turkey under Erdogan.

Take for example the draconian legislation introduced by the government that aims to restrict the consumption and advertising of alcohol, and which is currently awaiting approval by President Abdullah Gul, who also comes from the AKP.

The government claims to be introducing European legislation, but the zeal with which it is pushing this goes way beyond European standards, and is clearly driven by Islamic considerations. Erdogan makes no secret of this, too. Blasting at critics of the legislation during an address to his parliamentary group on May 28, he created a public outcry with remarks that are still reverberating.

“Whatever the religion concerned is, if it dictates what is true, are you going to oppose it? If legislation introduced by two drunks is respectable, why do you feel a law dictated by religion should be rejected?”

It is not clear who the “two drunks” are, but the feeling among Turkish secularists is that one of the “drunks” he was referring to was Mustafa Kemal Ataturk, the founder of the secular republic, who is known to have had a fondness for drink.

Erdogan did not bother to clarify his remarks, although he must have felt he had gone too far, because he added that they were not banning alcohol as such, and said, “If you still want to drink, then buy your alcohol and drink it at home.” With such remarks, though, he turns the concept of the private and public domains in a secular democracy on its head.

These remarks also highlight the insincerity of his exhortations to the Egyptians in September 2011, during and interview with that country’s “Dream TV,” not to be afraid of secularism: “In Turkey, constitutional secularism is defined as the state remaining equidistant to all religions” he said, adding that he may not be secular as an individual but was nevertheless the prime minister of a secular country. “In a secular regime, people are free to be religious or not,” Erdogan added. Today, however, he appears not to be standing behind these words, which had won him praise in Turkey and the West at the time. His actions and remarks indicate that the state, in other words the public domain, is increasingly motivated by religion, and individuals who are displeased can do what they want to do in their homes, in other words, the private domain.

Erdogan’s authoritarian tendencies, bordering on the autocratic, are also revealing themselves these days over a public attempt in Istanbul to prevent the cutting down of trees, some of them over a century old, in the park adjoining the famous Taksim Square where the government wants a shopping mall built.

A growing crowd of citizens from Istanbul, as well as opposition politicians and celebrities, have been keeping vigil for days and fighting pepper gas spraying police who have been displaying great brutality against the demonstrators.

The matter has become an even greater “cause célèbre” after a defiant Erdogan, displaying total disregard for the way ordinary citizens are being treated by the police — pictures of which have been circulated around the world — said “You can do what you want. We have decided and will go ahead as we decided.”

Mustafa Alabora, a well known actor and activist, told Hurriyet (May 31), from the spot where he is keeping vigil in the park, “The Prime minister says they will go ahead no matter what. Well, we are going to show our reaction too, no matter what you do.”

Underlining that theirs was not a political but an environmental protest, Alabora also called, albeit to no avail, on AKP supporters to join them to protect the trees. He recalled that he had supported the AKP against the staunchly secularist Turkish military’s attempt to topple it by illegal means, and added, “I am sad to say, however, that we are heading towards a police state, and today I am fighting against a police state.”

Perhaps it is just as well that all this is happening today, since it gives the public a foretaste of what they can expect if Erdogan really does become King in 2014.

Semih Idiz is a contributing writer for Al-Monitor’s Turkey Pulse. A journalist who has been covering diplomacy and foreign-policy issues for major Turkish newspapers for 30 years, his opinion pieces can be followed in the English language Hurriyet Daily News. He can also be read in Taraf.