The story of raki under the Justice and Development Party is the story of Turkey’s Islamic conservative transformation in a nutshell. 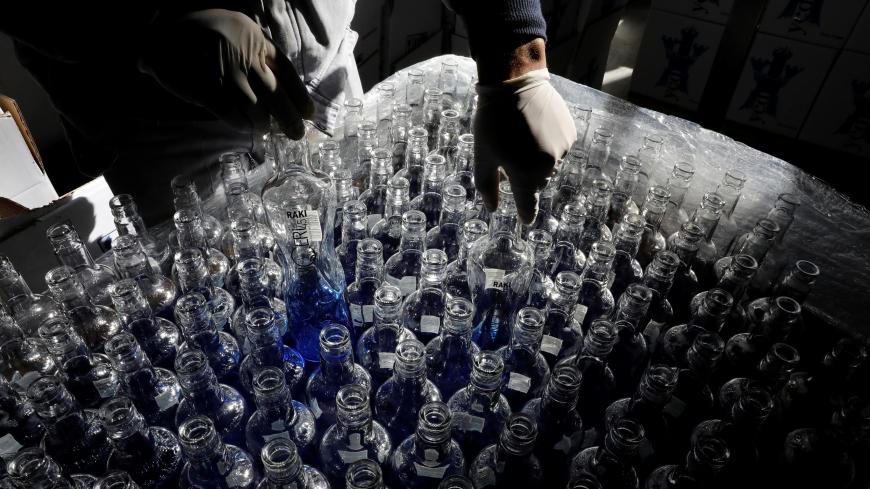 An employee checks raki bottles at the Infotex Alkollu Icecekler plant in the town of Dinar, Turkey, Nov. 30, 2017. - Reuters/Umit Bektas

A “big one” is what Turks colloquially call a 700-milliliter bottle of raki, the distilled alcoholic beverage known as the country’s national booze. The story of the “big one” under the Justice and Development Party (AKP) is the story of Turkey’s religious-conservative transformation as a result of political Islam taking over the state, the resistance of secular quarters to this transformation and the tensions between different segments of society, polarized along this axis. To understand the process, one does not need to drink from the “big one”; reading the bottle correctly and what it signifies would be enough.

To start with what raki actually is, the definition of the Turkish Food Codex says the drink is made of homegrown grapes and aniseed, and stands out among other distilled spirits for its distinctive production method, which is based on a traditional copper distiller technology.

This official definition makes raki the indigenous national booze. Accompanied by an assortment of mezes (appetizers or starters), raki is the centerpiece of “raki tables,” at which Turks sit down with friends, immersed in long conversations, be they heated political discussions or personal memory telling or heart-to-heart talks. In short, raki has a rich culture of its own, from the way it is produced to the way it is consumed.

Like all other spirits, raki has harmful effects on health. Yet the war on the “big one” that the Turkish government has been waging through various means is driven by ideological motives rather than the aim of protecting public health.

As the World Health Organization’s (WHO) 2018 global report on alcohol shows, alcohol consumption and addiction rates in Turkey are quite low relative to other countries. The figures hardly mesh with the level of alarm in the government’s war on raki.

In the 2003-2005 period, for instance, legal and illegal consumption of pure alcohol per year in Turkey stood at 3.4 liters per capita for persons over 15, while the average for the countries the WHO includes in the European region was much higher — 11.9 liters. In the 2008-2010 period, the figure fell by a massive 58% to 2 liters per capita, compared with 10.9 liters per capita in the European region. Moreover, the 2010 data show that 79.6% of Turkish citizens say they have never drunk alcohol. The rate of abstainers reaches 86.2%, including those who say they drank in the past but no more. In terms of alcohol addiction, Turkey’s 0.8% rate was also well below the 4% average of the European region in 2010, according to the WHO data.

The statistics and their timeline suggest that President Recep Tayyip Erdogan can hardly take credit for the Turks’ place among the most modest boozers with one of the lowest alcoholism rates. Still, he was right when he asserted during his election campaign ahead of the June 24 polls, “Since my days as a mayor, I have removed alcohol from wherever I have been.”

He was referring to his term as metropolitan mayor of Istanbul. After his election to the post in 1994, one of the first things Erdogan did was to ban alcohol sales in recreational facilities owned by the municipality. In 2004, a year after he became prime minister, Erdogan privatized factories that produced raki and other liquors. Today, eight private companies produce raki.

The ideological roots of Erdogan’s anti-alcohol stance were perhaps best displayed in a speech he made as prime minister to AKP lawmakers in May 2013. “They say I do this because of my faith,” he said. Then, addressing his critics, he added, “If a religion — no matter which — dictates the right thing, are you going to oppose that just because it is the command of a religion? How come laws made by two drunkards are reputable for you, but laws dictated by religion have to be rejected? … No one should make alcohol a matter of identity. This is not an intervention in anyone’s lifestyle. If you want to drink, go drink at home.” By "two drunkards" Erdogan was understood to mean Mustafa Kemal Ataturk, the founder of modern Turkey, and his right-hand man, Ismet Inonu.

In today’s Turkey, alcohol service is removed completely from public and government functions.

Rather than an abrupt, total ban on the “big one,” Erdogan has opted for limiting consumption gradually but steadily through exorbitant taxes and policies that make the issuance and renewal of alcohol sales licenses more difficult in addition to boosting social and political pressures. This is how he secures the consent of his religious-conservative base without imposing a wholesale ban on alcohol. As such, the huge taxes levied on the “big one” are symbolic of how consent is created through selective taxation. The supporters of alcohol prohibition consent to the absence of such a ban, at least for now, by benefiting from the high taxes that boozers pay.

The raki taxes and the pressure on raki consumers have increased in tandem with Turkey’s drift away from democracy and the rule of law. The AKP’s descent into authoritarianism began in 2008 with onslaughts on the mainstream media, marked by boycott calls and later hefty tax fines.

In the 10½ years since then, raki has seen special consumption tax (OTV) hikes amounting to 593,3%, including 262% in the past five years. The most recent hike in July was 15.5%. Meanwhile, the consumer price index, which determines the inflation rate, has increased 145% in the past 10½ years, meaning that the OTV hikes on raki have exceeded inflation by 448 percentage points. Obviously, the huge gap owes to politically and ideological motivations.

A decade ago, Turkey had a parliamentary governance system, while today an authoritarian presidential regime is in place, concentrating power in the hands of a single person, with checks and balances paralyzed.

In Europe, the highest special consumption tax on pure alcohol is in Sweden, amounting to 53,78 euros ($62) per liter. In Turkey, meanwhile, the OTV levied on pure alcohol, which is used in the making of raki, is 213 Turkish liras (about 28 euros, $33) per liter. At first glance, Sweden, whose alcoholism problem is far more serious than Turkey’s, may appear harsher on boozers, but this impression is quickly reversed when purchasing power is factored in. In this sense, the real value of Turkey’s tax is 2.7 times greater than Sweden's. In other words, the tax that Turks pay is the highest alcohol tax in Europe in terms of purchasing power.

This, of course, is not without consequences. Amid the tax-driven increase in prices, coupled with social pressures forcing the closure of liquor shops in conservative provinces, raki sales have inevitably fallen — from 44.6 million liters in 2012 to 37.3 million liters in 2017.

Yet the same pressures have spawned a huge increase in homemade raki. Many who are reluctant to pay 119 liras for a bottle have come to produce their own raki by mixing crop-based ethyl alcohol with aniseed oil, leaving the mixture to rest for a while and then adding water before consumption. According to experts, however, this is not real raki because it is not distilled.

Another consequence is ghettoization. In Istanbul, for instance, the traditional neighborhood tavernas are disappearing, while “taverna neighborhoods” are springing up in Kadikoy, a secular bastion on the city’s Asian side.

An executive in the raki industry, who requested anonymity, said, “Being seen as a hero by one side and as an infidel by the other is something that upsets me. I want to represent a dinner table where people have no prejudices against each other. I am in favor of depoliticizing raki. Whatever has befallen us, it’s all because there is no [real] rule of law and media.”

Correction: Oct. 3, 2018. An earlier version of this article mistakenly stated the percentage increase in OTV and resulting difference with the inflation rate increase.