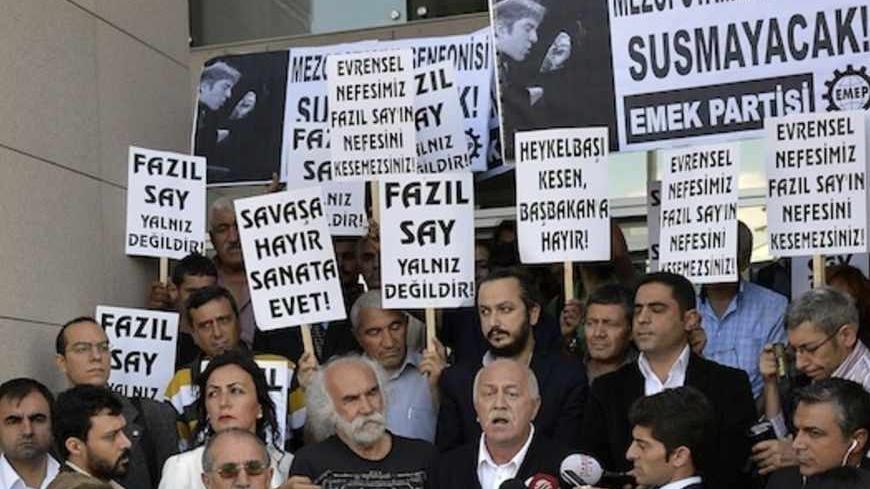 In the last few days, two deeply troubling court decisions brought to light Turkey’s double standards in respecting freedom of expression and religion. While historic churches risk being converted to mosques in Turkey, world class concert pianist Fazil Say has been given jail time for insulting Muslims. Something seems to have gone terribly wrong in how the Turkish nation develops its sensitivity to freedom and democracy.

Following the first court decision, made in Trabzon on April 11, all historic churches and synagogues could risk being converted into mosques. The sad story is this: Responding to the application of the General Directorate of Pious Foundations, the government body responsible for most of the country’s historic mosques and relics, a Turkish judge decided that Turkey’s Ministry of Culture and Tourism has been in a position of an “illegal occupier” for the past 50 years in maintaining the 13th century Church of Hagia Sophia in Trabzon, a city on the Black Sea, as a museum.

Trabzon’s mufti, the Sunni scholar Veysel Caki, said almost immediately after the verdict was read that Hagia Sophia will be converted to a mosque, and will soon be opened to public for Muslim prayers. “During times of prayers, we will close the frescos by curtain,” he said. While Caki denies any ulterior motive in converting the historic churches to mosques, it should be noted that once Turkish courts take this local court decision in Trabzon as a precedent, other historic churches could be in danger. It will all depend whether anyone files a lawsuit, and it's fair to speculate that the General Directorate of Pious Foundations won’t stop with this one decision in Trabzon.

This sentiment of reliving the glory days of the Ottoman era has started to show its ugly face when it comes to preserving the country’s multi-religious heritage. There is no lack of mosques in Trabzon. According to official numbers, there are 1,917 mosques there. But past Turkish governments aren't any more innocent when it comes to respecting non-Muslim sites in the country. The Directorate of Religious Affairs has the second largest budget after the military, but it has never spent a penny in taking care of the country's churches and synagogues.

While there seems to be no outcry from the international community against the Trabzon court’s decision, the Western media gave extensive coverage on Monday (April 15) when an Istanbul court convicted Fazil Say, a world-class concert pianist, to 10 months suspended imprisonment for “insulting the religious values of a part of the population” through messages on his Twitter feed. Orhan Kemal Cengiz, a Turkey Pulse contributor, wrote about it in detail here. Say cited a poem attributed to Omar Khayyam, an 11th century Persian philosopher, where he rhymed: “You say, your rivers will flow full of wine; Is heaven a tavern? You say, you will give every believer two very beautiful women; Is heaven a brothel?” Say continued the tweet with a muse of this poem: “I am not sure whether you have ever realized but wherever there is a lousy, cheap, populist, robber, clown like person — they are all followers of Allah. Is this a paradox?” It’s this last sentence the court claims to consider offensive to the country’s majority Muslim population.

Egemen Bagis, Turkey’s chief negotiator with the European Union, defended the court decision: “People like Say should learn to respect our religious values.”

Such statements, and these court decisions, couldn't be more disappointing for those who want to see Turkey to strengthen its democracy and truly honor the freedom of religion and expression. Riza Turmen, a Republican People’s Party deputy and a former European Court of Human Rights (ECHR) judge, explains the problem with such a mentality and these court decisions.