Who's Insulting Islam: Fazil Say or His Punishers?

The conviction of composer Fazil Say for blasphemy based upon a series of tweets has elicited outrage among pro-democracy advocates, writes Orhan Kemal Cengiz. 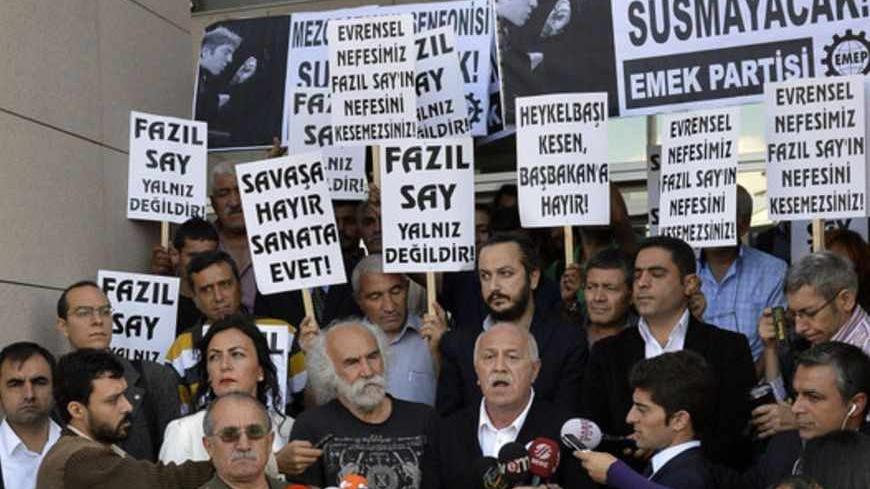 On Monday, April 15, I sent out a tweet: “In 21st century’s Turkey, someone received a prison sentence for citing a poem written in the 11th century.”

I was but one of those tens of thousands who were protesting the prison sentence given to internationally renowned pianist and composer Fazil Say. Say has received a postponed 10-month prison sentence for blasphemy for allegedly “denigrating religious values,” which is a punishable crime under Article 216/3 of the Turkish penal code.

Thousands and thousands of people were protesting Say’s prison sentence on Twitter just because he received this punishment for the remarks he quoted in his tweets and re-tweets.

Last autumn, prosecutors introduced an indictment against Fazil Say, claiming that he insulted Islam and religious values with nine tweets he either himself made or re-tweeted. Here are some of the tweets prosecutors cited: “I am not sure if you have noticed, but where there is a louse, a non-entity, a low life, thief or fool, they are all Islamists. Is this a paradox?”; “The muezzin recited the evening prayer in 22 seconds. Pretissimo con fuca!!! What is your hurry? A lover? Raki?”; “I am an atheist, and I am proud to say this with such ease”; “You say that the rivers flow with wine, is heaven a tavern? You say that you will give every believer two very beautiful women, is heaven a brothel?”

Actually, the last tweet is a quotation from a poem written by Omar Khayyam, a Persian poet who lived in the 11th century. Khayyam, in this poem, questions the understanding of “heaven” in Islam. The prosecutors don’t seem to be aware that Say was only quoting a poem written in the 11th century, but these lines were also taken as an insult to Islam.

Fazil Say, 43, is a worldwide virtuoso, who has played with the New York Philharmonic, the Berlin Symphony Orchestra and many others, and is also known for his strong criticism of the current Turkish government.

Some say this prison sentence he received is a retaliation against his harsh criticism of the government. Not many think that there was a government-sponsored secret campaign against Say. But his conviction is just another alarming development in Turkey. In recent years, the Turkish judiciary seemed to be over-sensitive about protecting religion and religious values against those who allegedly insult Islam. The case against Say was only one of those that was brought against artists and bloggers for allegedly insulting Islam and religion. Cartoonist Bahadir Baruter was also prosecuted in 2011 for the publication of a cartoon he drew in Penguen humor magazine. In this particular cartoon, the slogan “There is no God, religion is lie,” appeared on the wall of a mosque. A blogger called A.M.S was sued for an article he wrote with the title of  “Absurdity of Religion.”

Amnesty International, in its most recent report, titled “Turkey, Decriminalize Dissent: Time to Deliver on the Right to Freedom of Expression,” also expressed its concerns about the use of Article 216 of Turkish penal code. The group also stated that, “In practice, Article 216 has been used to prosecute criticism of dominant beliefs and power structures … ”

Amnesty International was also giving Fazil Say’s case as an example of abuse of Article 216 in its report published in March 2013.

There is no doubt about it that the Fazil Say's case is a good example showing the role of the judiciary in restricting freedom of expression in Turkey. This judgment arises from some questions about which everyone concerned and the Muslim world in particular should be thinking: Can we really protect religion with law? Do religions need such protection? When we start to punish people for anti-religious expressions, are we really protecting religion or projecting an extremely intolerant image of Muslims?

Therefore, while Fazil Say’s case reflects some particularities of the question of freedom of religion in Turkey, it also shows the over-sensitivity of the Muslim world in their concern to protect their religious values. Just a few weeks ago, a comedian in Egypt was also investigated for allegedly insulting Islam. We have quite fresh memories of violent images of angry Muslims protesting an American film allegedly insulting Prophet Muhammad.

Could anyone insult religious values and the Muslim world more than those who use indiscriminate violence in the name of protecting Islam and the Prophet? Who is really insulting religion? Is it Fazil Say, who uttered some words that Muslims may not like, or Turkish prosecutors who prosecuted Omar Khayyam’s poem written in the 11th century?

What if a religious fanatic attacks or tries to kill Fazil Say, whose “insult” to religion was just “confirmed” by a court decision in Turkey? Who is insulting religion really?

Orhan Kemal Cengiz is a human-rights lawyer, columnist and former president of the Human Rights Agenda Association, a Turkish NGO that works on human-rights issues ranging from the prevention of torture to the rights of the mentally disabled. Since 2002, He has been the lawyer for the Alliance of Turkish Protestant Churches. Cengiz is also an active columnist, writing for liberal daily Radikal and English-language daily Today’s Zaman.