Should the Turkish Government Break The Law For Peace?

Although Turkish Prime Minister Recep Tayyep Erdogan insists that the Kurdistan Workers Party (PKK) should  withdraw from Turkey without their  weapons, this is not likely to happen, writes Kadri Gursel. 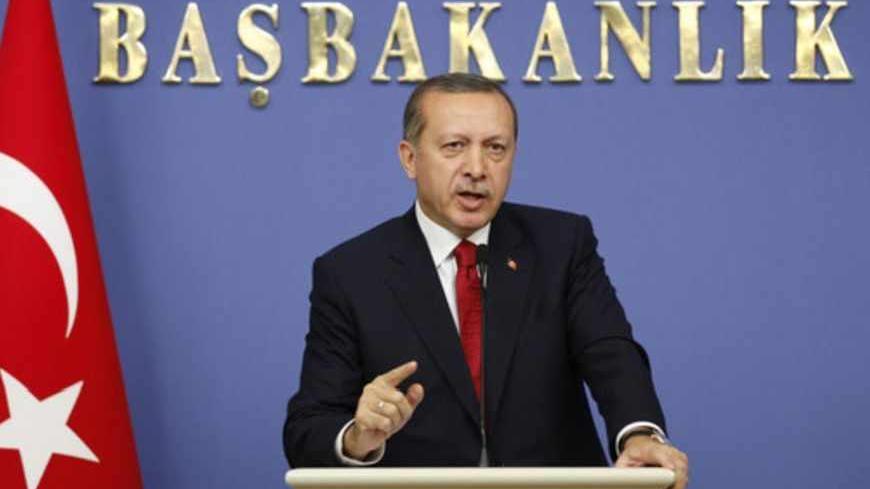 Security and disarmament dimensions of the peace process between the Turkish government and the PKK have had three critical thresholds, each more decisive than the last: First a cease-fire, then the withdrawal of armed PKK forces from Turkey and, finally, the PKK fully disarming.

We are now in the first phase of a cease-fire. This, the easiest phase, is proceeding successfully.

There have been many cease-fires between the PKK and the Turkish state. Most of those were made possible by the state more or less respecting the movement’s decision to cease action. The longest-lasting period of no action was the one initiated unilaterally by the movement after the handing over of Abdullah Ocalan to Turkey in 1999. The organization ended that period in 2004, also unilaterally.

In the phase calling for withdrawal of PKK armed elements from rural areas to outside of Turkish borders, things appear to be getting complicated, at least when you look from outside.

To summarize, this how it looks today: The PKK wants “legislative guarantees“ to withdraw its armed elements from Turkey. This means they demand legislative guarantees that their guerrillas, estimated to be in the few thousands, won’t come under fire from Turkish security forces once they start marching toward the border with their guns from the many areas they are in, starting with a small presence in the Black Sea region.

PKK forces will leave Turkey and deploy to bases in the mountainous region stretching along the border of Turkey and Iran in the northeast of Iraqi Kurdistan. This is the plan. Turkish Prime Minister Recep Tayyip Erdogan is refusing the PKK’s demand for legislative guarantees. His alternative offer is for the PKK militants to leave their weapons in Turkey and go without them.

On the evening of March 29, responding to journalists in a live transmission on CNNTurk, this is what he said: “They will either leave their weapons in caves or bury them before they go. If they march with guns on their backs, what will security forces do if they see them? They can’t just watch. That would be breaking the law. You cannot give legal assurances to anyone moving with guns in their hands. Neither the law nor the constitution allows this.’’

Previously, it was assumed that the PKK elements would be leaving with their guns. The Turkish prime minister, by saying “let them leave without their weapons,” has created a new situation. Cemil Bayik, the No. 2 in the PKK military hierarchy after Murat Karayilan, replied to Erdogan in a statement he gave to Firat News Agency, known to be close to the movement: "Guerrillas will not withdraw before a legislative basis is prepared with the appropriate measures that entails. Hundreds were martyred, wounded or taken prisoner when withdrawing before. When there has been such an experience, to get up and say there can be no legislative measures for withdrawal, which can be carried out only with administrative measures, is wrong and dangerous.’’

In 1999 when Ocalan was apprehended in Kenya and surrendered to Turkey, the PKK withdrew its forces to the bases in northern Iraq. Many were killed by Turkish security forces during that withdrawal. From Bayik’s remarks, it is clear that they fear a repetition of events.

It was interesting to note in that long interview that Bayik said nothing in response to Erdogan’s condition for ‘’unarmed withdrawal” while insisting on legislative guarantees for the withdrawal of the PKK forces from Turkey. We have to wait a bit more to understand why Bayik did not say “we can’t leave without our weapons,” and whether this omission allows room for bargaining. Did Bayik suggest that they may consider unarmed withdrawal if they are given legislative assurances? We don’t know that yet.

In the PKK’s political culture and identity, a gun carries existential symbolism. Those who know this can understand how difficult it would be for the PKK to depart at the beginning of the process by leaving their guns behind, without receiving the rights and assurances it demands for the solution of the Kurdish issue.

Leyla Zana, when she said in January 2012, “The gun is the insurance of the Kurds,” was harshly criticized, but she was stating a reality. The matter is not only a security concern for the PKK. There is also a political aspect of the situation related to the nature of the peace process. "Peace process" is not only about disarmament, but also means finding a parallel political solution to the Kurdish issue, and for Turkey to change accordingly.

Let’s continue to read what Bayik said: "The issue is being treated as the PKK ceases fire, withdraws, evacuates and that is that. But this is not the issue here. Cease-fire and withdrawal of the guerrillas are being advocated as a part of the democratic political settlement of the Kurdish issue. It will mean something only if these goals are served. There are conditions linked to that. There will be no withdrawal until these conditions are created.”

The biggest problem of the "peace process” with Turkey’s Kurds today is ‘’confidence.” Both sides don’t trust each other. This is why the PKK demands legislative guarantees and wants to affix some sort of “legislative” stamp to the process under the parliamentary roof because the political confidence element is lacking.

For Erdogan, the ‘’peace process” is not simply a “peace process,” but a process that will open the way to the presidential system to which he aspires.

This fall, the prime minister may face a constitutional referendum that would enable a regime change and three elections in the next two years. To preserve his credibility with his nationalist and conservative constituency, Erdogan wants to be seen bringing peace to Turkey without giving any concessions to the PKK.

That is why he wants to move up, all the way to the top, the “giving up of weapons,” which under normal conditions would be the last phase of a peace process.

The prime minister, government spokespersons and their media constantly say the peace process is not moving according to the principle of the reciprocity. But this attitude, let along the confidence deficit, makes it worse. There is one way to overcome the deficit of confidence: to activate confidence-building measures.

Spokespersons for the Kurdish movement have been saying what such measures could be even before the process began. For example, the co-chair of the pro-Kurdish Peace and Democracy Parity [BDP], Selahattin Demirtas, said in September 2011: “The road to peace must be cleared. You can’t walk if there are land mines on the road. The government must do the road clearing. What are these land mines? Barriers to freedom of expression and freedom of press, political detentions, impediments in political parties’ legislation and the 10% election threshold. The government cannot convince us or the PKK before solving these issues. The government must assume a role that will instill confidence in everyone.”

When talking of ‘’political detention,” Demirtas was referring to 7,000 unarmed Kurdish activists and politicians detained between 2009-2012 on charges of being members of a terror organization. For the time being, there are no satisfactory legal preparations to free these people.

These confidence-building measures have nothing to do with the conditions the PKK is demanding toward a solution of the Kurdish issue. They are linked to improving standards of democracy in Turkey. They will benefit all Turkish citizens.

But the government, instead of instilling confidence, and showing that it is serious and sincere in wanting peace, finds it enough to say, "You can leave without your guns.” If these confidence-building measures could be activated, they may also help, along with the process to find a solution to the Kurdish issue, to reverse the authoritarian drive in Turkey.

The AKP government is not taking action to activate confidence-building measures. Also for justified reasons, it is not willing to undertake legislative arrangements to assure the PKK of leaving safely, armed or unarmed.

There are no conditions of surrender that would require the PKK to leave unarmed. Moreover, the political reality of the movement and the Kurdish region are not conducive for such a departure.

Today, Turkish armed forces, intelligence and police forces are fully under the control of a civilian, elected government. Conditions are very different than 1999. Turkish security forces have no other option than to obey the government.

The prime minister is saying, “What will the security forces do when they see them carrying guns? They can’t just watch, that would be breaking the law.” Well, the state committed many crimes when seeking a military solution to the PKK, with summary executions, torture and setting villages ablaze.

This time the state has to commit crimes for peace. The only remaining option is for the security forces to turn their backs and not see the PKK elements passing by.

Most likely this is the way it will be.