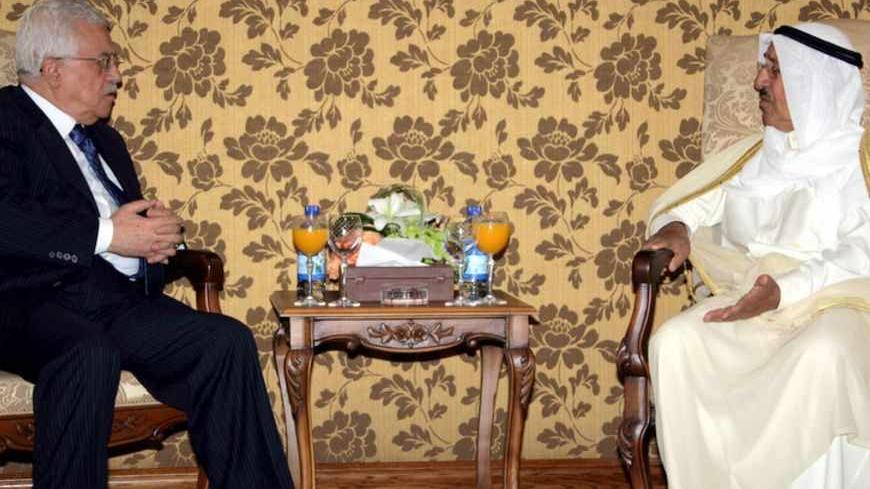 A new chapter in Kuwaiti-Palestinian relations is about to begin following a two-decade-old rift between the oil-rich Gulf state and the Palestine Liberation Organization (PLO). On April 15, Palestinian President Mahmoud Abbas traveled to the Kuwaiti capital, where he was scheduled to reopen the Palestinian embassy, closed in 1990 after the Iraqi invasion of Kuwait.

Relations soured between the Kuwaiti and Palestinian leaderships after the PLO, headed by the late Yasser Arafat, failed to condemn the invasion. It was then that the Palestinian embassy was closed, ties with the PLO severed and financial support withheld.

“The opening of the embassy makes official the thawing of ties and marks a new phase of more positive interactions that will pave the way for normalized relations,” Talal Okal, an independent political analyst, told Al-Monitor.

Before the Iraqi invasion, between 400,000 and 450,000 Palestinians lived in Kuwait. That number fell sharply, to about 30,000, after many of them were deported, had to leave because their visas renewals were denied, or were forced to flee fearing intimidation or persecution.

Tensions began to ease after Abbas made an official apology to the Kuwaiti people shortly before he took office following the 2005 presidential elections. “We apologize to Kuwait and the Kuwaiti people for what we did,” Abbas said in Dec. 2004, speaking to reporters during his first visit to the Gulf state after he succeeded Arafat as PLO chairman.

Rami Tahboub, the Palestinian ambassador to Kuwait appointed in January, confirmed that there will be an official welcoming ceremony at the airport and that Abbas is due to hold talks with Emir Sabah al-Ahmad al-Sabah and the speaker of the Kuwaiti National Assembly, Ali Fahed Rashid.

Palestinian officials said an official ceremony will be held to reopen the Palestinian embassy, raising the Palestinian flag some 22 years after it was lowered and removed from the mast. “This visit marks the turning of a new page and a renewal of the support of Kuwait, which has historically embraced Palestinians and their cause,” Mohammad Shtayyeh, senior negotiator and close adviser to the Palestinian president, told Al-Monitor.

Palestinians had tried to renew relations with the Arab Gulf state even before Abbas apologized in 2004. Three years earlier, Faisal al-Husseini had traveled to Kuwait, becoming the highest-ranking PLO official to visit since 1990. During his trip, Husseini held talks with the foreign minister and parliamentarians, but was ultimately rebuffed. Husseini suffered a fatal heart attack during his visit, leading many Palestinians to attribute it to the unwelcoming reception with which he was met.

After Abbas’ public apology, relations gradually began to improve, with Kuwait renewing aid to the Palestinians, albeit in a limited manner. Shtayyeh acknowledged, “Kuwait, with its people and government, have supported us in the past few years either directly or through the World Bank.”

Kuwait had long been a destination of choice for Palestinians seeking jobs and security, especially civil servants and teachers. Thousands started making their way to the emirate in the late 1940s, when it was still a British protectorate. During that time, they played major roles in the country’s scientific, medical and cultural sectors, and made significant media and literary contributions, including the founding of newspapers and journals.

According to Toufic Haddad, a Palestinian-American writer born and raised in the Gulf state, “Kuwaiti society and policy from 1948 to 1990 was much more pan-Arab and pro-Palestinian than other Gulf monarchies, although the Kuwaiti authorities maintained a tight grip on Palestinian activities.” Under the rule of the first emir, Israeli goods were boycotted and anyone caught flouting the ban was sentenced to hard labor and a fine.

“Kuwait not only stopped its generous flow of financial support, but also started taking unprecedented, unacceptable political stances,” Okal said. He also contended, “When the financial support ended and the PLO’s coffers began to dry up, the umbrella organization was under the risk of demise, which paved the way for its acceptance of Oslo and the American dictates.”

At one point, the Kuwaitis had been the chief financiers of the PLO. They even allowed the group to levy a 5 percent tax on the incomes of Palestinians living in Kuwait. Okal said he believes that a normalization of relations will ensure that the next period will be marked by two milestones. “The likely effect is a renewal of Kuwaiti financial support, but more important it will mean paving the way for Palestinian workers to get back into the Gulf Arab state.”

Indeed, Palestinian officials are hoping that in addition to mending fences, Abbas' trip will mark a renewal of financial support at a time when the PA is under duress due to dwindling international aid and an economy in crisis. “We hope our Kuwaiti brothers will continue to support us in the current difficult financial state we are in, and that Kuwait will open its doors to our skilled professionals, which in turn will have a positive effect on our economy,” Shtayyeh said.

During his visit, Abbas will discuss issues related to the Palestinian community in Kuwait, estimated to be around 80,000 today, as well as efforts to locate Kuwaiti landowners and homeowners who bought property in the Palestinian territories prior to the 1967 war.

Shtayyeh voiced hope that the visit will also yield positive political steps toward ensuring a strong, joint Arab stand in regard to the peace process. “We hope to see a closeness in positions vis-à-vis negotiations and to see the Arabs taking a more active role in the international arena, especially in light of the decision to send an Arab [ministerial] delegation to Washington [on April 29] and the UN Security Council.”