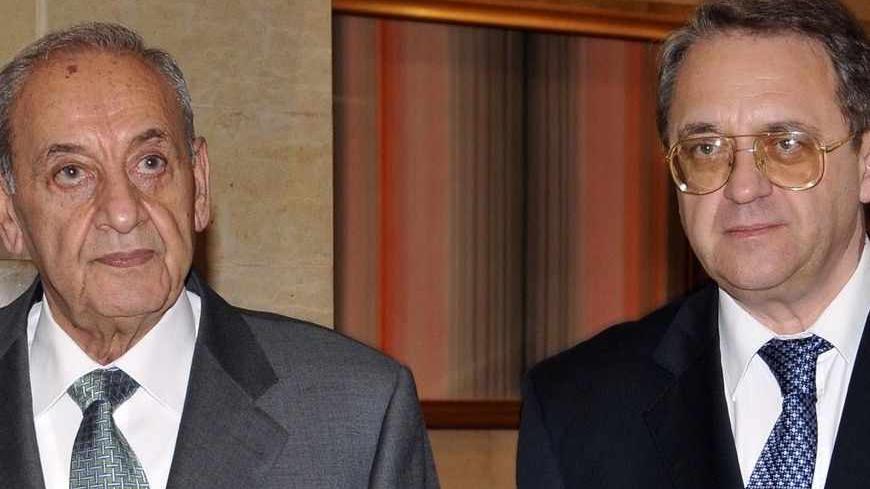 Two main points are worth examining from the visit of Deputy Foreign Minister Mikhail Bogdanov to Lebanon.

First, the visit took place in the absence of an effective government in Lebanon. Russian sources had expected the visit to be postponed until the formation of a new government, but the Russian Foreign Ministry insisted that it take place on the scheduled date.

Diplomatic sources say the visit took place in the presence of a government that had resigned because Moscow has adopted a new vision of its relations with Lebanon. Thus, it no longer limits its interest to its friendship with the Lebanese state, but also seeks to establish relations with all Lebanese political forces of all sects because it knows that the state in Lebanon is the weakest party in its internal political equations.

Consequently, Moscow's new orientation in the framework of its plan to find political influence in Lebanon is to build horizontal links within the country’s political map with a focus on the common element that links it to the Lebanese Orthodox population.

According to an expert with an Orthodox point of view, Bogdanov's visit sought to underline the Orthodox aspect of his country's new regional policy, especially considering that Russia considers Lebanon an important platform from which it can send its Orthodox political message to the entire Middle East.

This expert says that Bogdanov's visit reached the peak of its Orthodox aspect with the meeting he held at the Phoenicia Hotel in Beirut with a large crowd of representatives from Lebanese Orthodox associations.

The second main point worth examining about Bogdanov's visit to Lebanon is the meeting he held with Mohammad Raad, the head of Hezbollah's Loyalty to the Resistance parliamentary bloc. The message of this meeting was to establish a political connection while highlighting that Bogdanov had arrived in Beirut from Tehran. Reports indicate that the Syrian issue took up a major part of the discussions between Bogdanov and his Iranian counterpart in Tehran. These talks focused on the following points. The first was to establish, behind the international scenes, a formula to link the political solution to the crisis in Bahrain with the crisis in Syria. The second was to confirm their united stance that the Syrian crisis be resolved through the Geneva agreement, and that the fate of Syrian President Bashar al-Assad should be decided by the Syrian people in a presidential election. The third was to condemn that international reaction is being stirred up against the interference of Iran and Hezbollah in Syria while a blind eye is being turned to Turkish and Qatari interference. Under this view, Iranian interference in Syria is seen as a reaction to Turkish and Qatari interference.

The same source revealed that Bogdanov conveyed this message, which his Iranian counterpart agreed with, during a meeting with Raad. The source said the Russian envoy expressed Moscow's understanding the rationale behind Hezbollah's interference in Syria’s Qusayr countryside, considering it to fall within the framework of defending all minorities in the Middle East against the growing fundamentalist Salafist movements in the region.

According to Lebanese sources close to Russia, the latter has decided to play a role in the region whereby it protects all minorities, not only Christian or Orthodox ones. The sources said that an important conference Moscow had planned to hold in Beirut in April has been postponed until fall for technical reasons. The sources confirmed that Moscow is seeking to change the conference title from "Protection of Christians in the Middle East" to "Protection of Minorities in the Middle East." Sources said Moscow’s plans for its role the Middle East include the protection of "Shiites, Alawites, Ismailis, Druze and Christians in all their sects — and Jews." Moscow's policy aims to "build a broad social front in the Middle East against Islamic fundamentalism."

Thus, Moscow is seeking to establish a front of foreign arenas where it can wage battles to eliminate the Salafist jihadism threatening its national security, instead of having to fight jihadis within its borders and in the old Soviet republics, which have come to represent Russia's backyard.

The sources pointed out that Moscow wants to include Israel in this front. In this context, it shows that the talks of Russian President Vladimir Putin had last summer in Israel were of great interest to the Israelis, as he informed both President Shimon Peres and Prime Minister Benjamin Netanyahu that Moscow should protect the Russian-Jewish minority in Israel. Tel Aviv considered that his words were aimed at conveying a message according to which Moscow deems Israel as one of the Middle Eastern minorities tackled in Moscow's new regional strategy, while also calling on it to adopt a fair policy toward the Palestinian issue.