While many are hailing Kuwaiti opposition figure Musallam al-Barrak as a symbol of rebellion, his public stances reveal a conservative man with a controversial agenda, Mona Kareem writes. 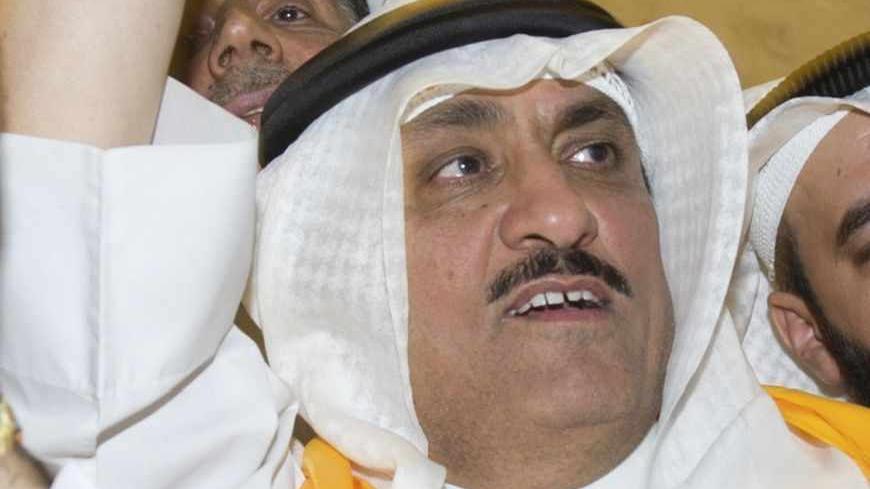 Kuwaiti former member of parliament and opposition politician Musallam al-Barrak (L) greets supporters from his house in Andulos, after a ruling sentenced him to jail for insulting the emir, April 15, 2013. - REUTERS/Stephanie McGehee

Earlier this week, Kuwait’s court sentenced the opposition front man Musallam al-Barrak to five years in prison for insulting the emir, an act criminalized by the Kuwaiti constitution.

The verdict has been awaited for months and it was not the only case that al-Barrak was facing. Al-Barrak was also to attend another trial over storming the parliament with other MPs and protesters in November 2011. When al-Barrak was arrested in November 2012 for insulting the emir in a public speech, thousands marched to the central jail, prompting his release in less than 48 hours. We thought this man was too powerful to be jailed, so why would authorities commit political suicide by angering his supporters? No one can frighten the authorities anymore it seems, and here are some factors to consider:

Al-Barrak is no longer a representative of the parliament. He no longer enjoys parliamentary immunity and has become a symbol of ‘instability’ for those who are not interested in pushing for change through mass mobilization. Last December, the opposition decided to boycott the elections to protest the voting law that the emir amended using an “emergency decree.” The country witnessed its largest protests that included anti-opposition Kuwaitis who did not approve of a change in the voting law from outside the parliament. That change was the perfect trap for the opposition. Eventually, the protests cooled down, the opposition became a parliamentary past, and a Bahraini-like parliament was installed in place.

To have an idea of what kind of parliament Kuwait has now, we can take Safa’a Al-Hashim’s latest statement as an example. The female parliamentarian — who used to give away anti-protest T-shirts in shopping malls last year — threatened to grill the Minister of Interior Affairs for not dispersing and punishing those who recently protested in Al-Andalus.

By choosing to boycott, Kuwait’s opposition surrendered their only shield that could protect them from politicized trials.

Within the past two years, Kuwait witnessed a number of politicized decisions issued by its judiciary, starting with the decision to void the parliament elected on January 2012, which the opposition dominated, and ending with multiple sentences to Twitter users and activists for insulting the emir. Authorities are now prosecuting any young voices, using the judiciary system, focusing on the constitutional taboo of insulting the emir, and squeezing the opposition in exhaling its last breath. Thousands have been protesting at al-Barrak’s house since Monday in a show of support and blocking police from approaching him. Authorities might be aiming to allow those crowds gather without confrontation, until they are no longer able to mobilize. After losing its reputation as the only Gulf state exercising free speech, authorities have nothing more to lose but state order and will do anything to maintain it.

What about Musalam al-Barrak? What does the world know about him? Is the romanticized image of him true? On social media, he is becoming a figure of rebellion around the Gulf, considering his masculine representation and tribal background. After successfully bringing down the former Prime Minister Nasser al-Mohammed al-Sabah during the November 2011 protests, foreign media attributed a number of labels on al-Barrak, including referring to him as one of the most powerful politicians in the region. To confront this image, there are two important details to know about al-Barrak: his political ideas and position towards the Bahraini uprising.

First, al-Barrak is not a ‘moderate’ politician in the classic definition of the word, but rather a conservative. He was one of many MPs who voted for gender segregation in schools and universities in 2008, and for criminalizing insults to Islam with a death sentence, which was proposed earlier last year and terminated by the emir.

Second, in March 2011, al-Barrak took part of a rally that was organized to show support for the Bahraini regime. His speech was moderate compared to others at the protest, since he did not criminalize the protests, saying: “we refuse any oppression practiced against protesters but we also refuse any calls for the fall down of the regime in Bahrain. The Bahraini opposition should accept the genuine proposal for reforms put forward by the crown prince.”

A few months later, al-Barrak was rallying against the former prime minister and criticized al-Mohammed for calling the presence of Saudi troops in Bahrain “an invasion.” al-Barrak explained: “This is no intervention. Saudi Arabia and Bahrain are part of a whole [the Gulf].” In the same speech, al-Barrak attacked al-Mohammed for not prosecuting a Kuwaiti newspaper, which criticized King Abdullah of Saudi Arabia.

Third, in 2005, al-Barrak actually voted against a bill—which eventually passed—granting women the right to vote and to run as candidates in elections.

This brief explanation of who al-Barrak is might explain the political challenges Kuwait is experiencing. On one side, you have a state ruled by its police and political trials that aim to wipe out the political opposition and free speech. On the other side, you have politicians incapable of having an agenda free of sectarianism to appeal to minorities, as well as those who support reforms without any clashes, retaining the emir as a symbol of the state and a stability that other Arab revolting countries are lacking.

Mona Kareem is the founder of BedoonRights.org and a graduate student in Binghamton, NY. She is a blogger, journalist and poet with two published collections. You can follow her blog at www.monakareem.blogspot.com.