Kuwait’s liberal bloc is seizing the opportunity to restore its political voice with the dissolution of parliament. 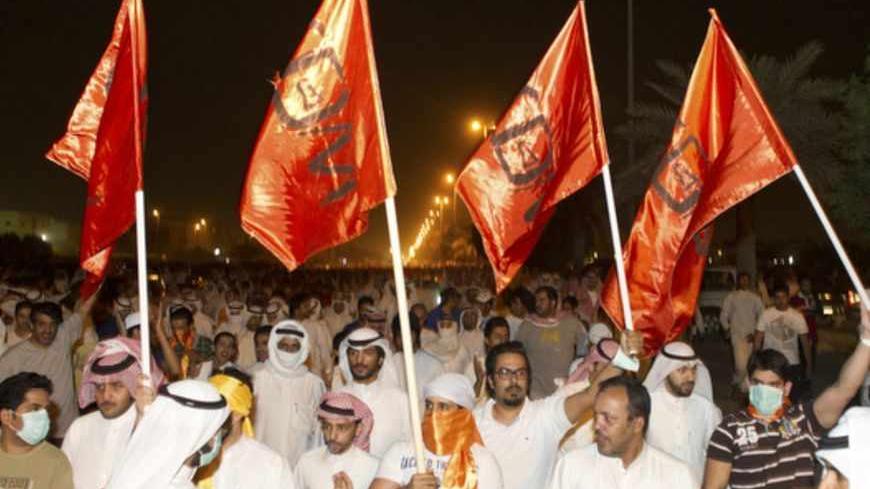 Supporters of Kuwaiti former member of parliament and opposition politician Musallam al-Barrak wave flags as they march toward the central prison in Andulos, after a ruling sentenced Barrak to jail for insulting the emir, April 15, 2013. - REUTERS/Stephanie McGehee

On June 16, Kuwait’s constitutional court found the country’s parliament illegitimate and ordered its end, depriving its members even of their legal status as former parliamentarians. Kuwaitis waited for weeks for the court’s decision, hoping it would put an end to the political uncertainty caused last year by the emir’s decree to amend the electoral law. Now that the ruling described the emir’s amendment legal and official “as it serves the national interest and the chances of minorities to be represented,” political groups and their supporters are announcing their plans to take part or not in the July 25 elections.

The liberals are back

In the past few years, the liberal bloc represented by the National Democratic Alliance (NDA), which had three MPs in the 2009 parliament, has been criticized by both its supporters and members of the opposition for its position on the struggle against former prime minister Nasser al-Mohammed, popular protests and the amendment of the electoral law. On one side, some supporters did not want their liberal members to work with an opposition that is ideologically Islamist, conservative and, more importantly, tribal. The liberal MPs, however, were split in their priorities and parliamentary votes throughout the months of protesting and grilling of Mohammed until he resigned in November 2011.

The way the liberals organize politically in Kuwait is also split. They usually cooperate with the National Bloc, which had six MPs in 2009, placing them together with independent MPs who are mostly nationalists of the urban upper class. They also work with Saleh al-Mulla from the Arab nationalist al-Manbar. When the opposition decided to boycott the elections in December, the three supported the boycott in a coalition, describing the emir’s decision as unconstitutional.

Once again, however, supporters of the liberal bloc were split between voting and boycotting. After the boycott, liberal politicians became irrelevant in the struggle between the opposition and authorities. They observed that there was no space for politics outside parliament except through protests that come with arrests. They also cannot see themselves working with an opposition that continuously criticizes them. The liberals were waiting for a ruling that the emir’s decision was legal and should be respected. It was already expected that they would be the first to return to the ballots.

Before the ruling was made, the opposition’s spokesman Musallam al-Barrak said that any decision to make the emir’s decree legal will only mean that Kuwait’s judiciary is political and lacks independence. After the ruling, the 23 opposition members gathered with their leader Ahmed al-Saadon to make a decision about the upcoming elections. They decided to boycott again, but this time their decision was widely questioned by their supporters.

Through social media and columns, the opposition’s supporters wondered if the boycott will be useful or even popular this time. In the past six months, they have watched as the boycotted parliament's members applauded the oppression of political dissent. They also realized that activity by their politicians outside the parliament means continuing protests and political persecution. Without their parliamentary immunity, the opposition leaders will continue to face trials for their critical speeches.

Given all those factors, some of the opposition’s supporters are announcing the decision to take part in the elections. Dahem al-Qahtani, a blogger and a prominent opposition activist, wrote a column stating his decision to vote in the coming elections. He explained, “We boycotted the last elections because the amendment of the electoral law was made by a one-man authority,” adding, “Based on the same principle, we should fight this kind of authority by voting in a parliament capable of legislating a strong electoral law that would include the shift to a one electoral district instead of the current five.” Qahtani noted that the opposition should have waited to hear from their supporters before making the decision to boycott.

Perhaps the strongest hit to opposition’s decision to boycott was a statement published by Ahmed al-Khatib, an Arab nationalist and one of the founding members of the country’s parliament and a major figure in various struggles against authorities from one era to another. Khatib has been calmly supportive of the opposition despite the critiques directed at him from some urban Kuwaitis who do not see any good in working with the tribal-Islamist opposition.

In his statement, Khatib said the court’s decision “ended a culture of enslavement by overcoming the myth of the unaccountable leader and the obedient masses.” Khatib’s praise of the court’s decision is incomprehensible considering the clear political nature of a ruling that legitimizes a change to an electoral system by elected parliamentarians. Considering the popular power of Khatib, he was perhaps convinced to make such a statement in favor of stability and a return to elections rather than street protests.

For now, the country will be living four weeks of discussions, expectations and campaigns — the best way to keep protesters busy. Liberals, the National Bloc, Shiites and the Salafi Islamic Alliance will all be competing in the coming elections. As for the opposition, disagreement among their supporters will surely weaken their position. Will they reconsider their decision? Will they push their youth to participate in the elections? And how relevant and powerful will they be after a new parliament includes the return of some groups?

Mona Kareem is the founder of BedoonRights.org and a graduate student in Binghamton, N.Y. She is a journalist and poet with two published collections, blogging at monakareem.blogspot.com. On Twitter: @monakareem