Iraq: Who Is to Blame For the Hawija Violence?

Dozens of demonstrators were killed and more than a hundred were injured in the Iraqi town of Hawija, prompting questions about who is responsible, writes Mushreq Abbas. 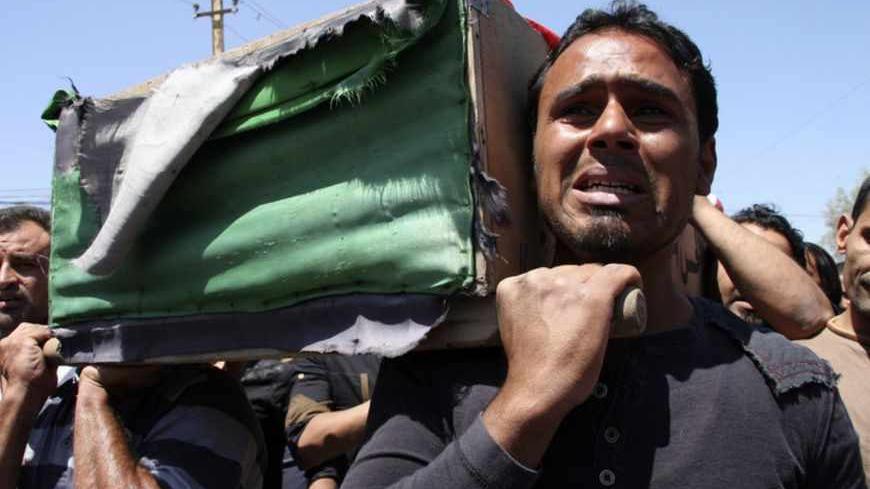 Mourners carry the coffin of an Iraqi soldier killed in clashes with Sunni protesters in Hawija, at his funeral in Baghdad, April 25, 2013. - REUTERS/Wissm al-Okili

Did a mere miscalculation result in the Iraqi army storming the demonstrations in the town of Hawija last Tuesday [April 23] at dawn, leaving 50 people dead and 110 injured, as well as igniting confrontations that lasted for three consecutive days that left dozens of victims belonging to the security forces and Sunni tribesmen?

Obviously, most people thought that such a move would lead to these results, and possibly even mutate into a growing avalanche that could destroy whatever remained of internal civil peace. Yet, the insistence to carry this action out, and then justify it by saying that the Iraqi army was fired upon, raises a lot of questions.

Why were the Sunni demonstrations allowed to continue and grow for nearly four months without any official effort aimed at appeasing the situation? Why was the army allowed to remain in proximity to the demonstrations, which were mostly held outside the cities and far from public institutions and interests, in a manner that would permit the type of friction that lead to massacres such as those that occurred in Hawija?

Ultimately, Prime Minister Nouri al-Maliki might be to blame for what occurred in his capacity as head of the government, commander in chief of the armed forces and the official directly in charge of running the interior and defense ministries, as well as the national security and intelligence services, which have lacked directors for the past three years.

But Maliki’s allies and opponents also bore responsibility when they exploited the demonstrations, as he did, to achieve electoral gains and deride one another. Maliki, who headed the massive State of Law coalition that won proportional victories in eight Shiite cities during the last provincial elections, did not desire that permanent solutions be reached prior to the elections. The Sunni demonstrations gave his political coalition an advantage when the focus of electoral campaigns shifted from “the lack of services” and “rampant corruption” to talk about Maliki’s defense of Iraq’s Shiites against the Sunnis. He was thus portrayed as a “legendary hero” who spares no effort to defend his sect and re-establishes a strong state that strikes opponents with a fist of steel!

This imagery stripped away the meaningful content of local elections. It was also reciprocated by opposition Sunni politicians and supporters of the demonstrations, such as Iraqi Speaker of Parliament Osama al-Nujaifi who, through his coalition dubbed “defiant," urged the Sunni citizenry to vote to rid themselves of the government’s oppression, while portraying Nujaifi and his allies as saviors capable of standing up to a biased government, and coming to the aid of demonstrators and detainees.

It should be noted here that winning one or even 20 seats in local governments does not allow the attainment of any of the above-mentioned goals because these governments have limited authority and primarily focus on providing basic services. Maliki’s allies, such as spiritual leaders Muqtada al-Sadr and Ammar al-Hakim, who fought the elections as independents, sought to present arguments that would convince Shiite voters of the need to elect them through focusing on the prevailing political atmosphere, while appearing as non-aligned on the subject of demonstrations. For their part, Nujaifi’s rivals also espoused the same tactic in Sunni areas.

Amidst this political polarization, months quickly passed without any serious initiatives being proposed to solve this crisis, which grew in intensity and threatened to blow up at any moment.

Electoral considerations trumped all others in the minds of Iraqi politicians. The demonstrations were viewed as exploitable electoral material without any regard given to the danger posed by leaving them unchecked, in the absence of comprehensive solutions.

Was it not possible to hold the all-encompassing national meeting that President Jalal Talabani had called for months ago to deal with the crises that led Sunni anger to boil over, followed by that of the Kurds?

To answer that question, we must take into consideration that Talabani himself was subsequently absent as a result of a heart attack, which kept him, the supposed sponsor of dialogue, out of the political scene.

Yet, that answer does not rise to the level of the danger engendered by the continued Sunni demonstrations. For, if the will for a solution was there, dialogue would have commenced, with or without Talabani.

Even before local elections were held, the government, represented by its head, always used to say that it had acquiesced to Sunni demands such as the release of some prisoners, the amendment of the “confidential informant” law and the proposed amendment of the parliament “de-Baathification” law. Any compliance by the government means that the demands made by demonstrators were “legitimate.” For it goes contrary to reason that the government should comply with illegitimate demands.

Still, Maliki, in an electoral conference held in the Iraqi southern city of Nasiriyah, talked about “rebels” and not demonstrators, and about demonstration rallies teeming with members of al-Qaeda and the Baath party. He also talked about his parliamentary bloc refusing to amend the parliamentary “de-Baathification” law prior to the adoption of another law that criminalized that party, and prior to compensation being paid to all those who were victimized by the party throughout the past 30 years.

But, while it is valid to ask why those victims have yet to be compensated, 10 years after the end of the Baath party’s rule, another more pressing question arises concerning the validity of using demonstrator demands in Mosul (400 km [about 250 miles] north of Baghdad) for electoral purposes in Nasiriyah (400 km south of Baghdad).

Political exploitation of the demonstrations, in fact led to the events that transpired in Hawija; for these demonstrations grew because no one was desirous of finding solutions, and all wanted to fling accusations at their rivals. As a result, this live grenade that all wanted to play which finally exploded in Hawija, its blast radiating to most Sunni cities.

Why did the situation so quickly deteriorate after the elections and not before them? This is another question worth considering!