In the large Iranian diaspora in the US, only a small fraction backs any recognized opposition group, and the Mujaheddin-e Khalq is the least popular, reports Barbara Slavin. 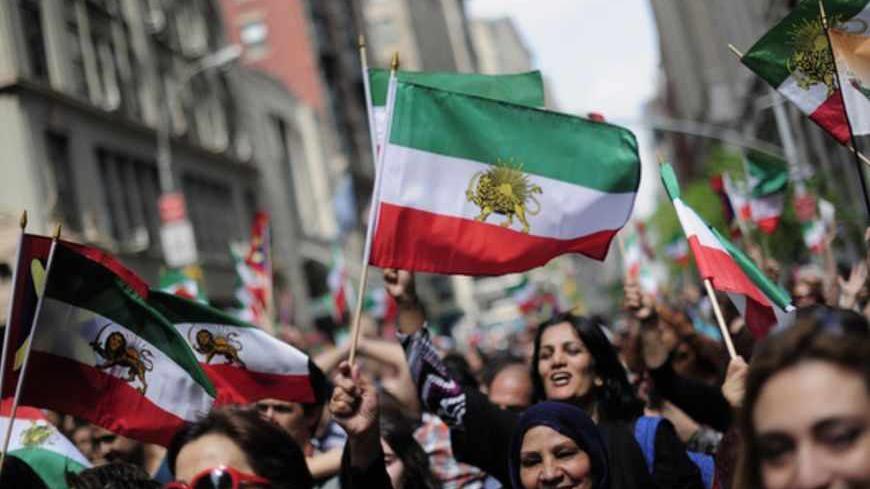 Often viewed as hopelessly divided, Iranian-Americans are united in wanting the US government to expend more effort promoting democracy and human rights in Iran, but do not want the US to try to overthrow Iran’s government or strike its nuclear facilities, according to a new poll.

The findings reflect the continuing strong ties between the large Iranian diaspora in the US — estimated to number about one million — and their homeland. More than three decades after the overthrow of the Shah, 66% of those polled said they communicate with family and friends in Iran at least several times a month, 32% have a parent in Iran and 44% a sibling there.

A majority — 56% — of those polled say that the promotion of human rights and democracy in Iran should be the most important issue for US policy toward Iran. However, only 31% want the United States government explicitly to back regime change and only 15% support any recognized opposition group.

According to the poll, conducted in February by George Mason University among 400 Iranian Americans chosen from 8,000 phone numbers, of the small percentage that backs any particular group, 35% favor the reformist Green Movement, which was suppressed by the Iranian government in the aftermath of disputed 2009 elections; 20% like the son of the Shah, Reza Pahlavi, who lives in exile in Maryland; and only 5% back the Mujaheddin-e Khalq (MEK), a cultish faction that was recently taken off the State Department’s terrorism list after an expensive lobbying campaign.

“There’s a clear consensus among Iranian-Americans in favor of a tolerant, democratic government in Tehran, but there’s no clear consensus on how to get there,” Karim Sadjadpour, an Iran expert at the Carnegie Endowment for International Peace, told Al-Monitor. “There’s a huge gap between people's desire for change and their inability to find credible change agents.”

Mehrzad Boroujerdi, an Iranian-American who teaches political science at Syracuse University, said he was not surprised by the poll results. It “reflects the ambivalent view of many Iranians toward what role the US government should take," he said. "They feel that democracy and human rights should be the foremost concern, whereas US administrations [both Democrat and Republican] mainly care about the nuclear issue. The legacy of the 1953 coup [when the CIA toppled a popular prime minister and put the Shah back on the throne] coupled with the inflated nationalist-religious sentiments of the post-1979 era and the terrible track record of Afghan and Iraqi invasions forces most Iranian-Americans to refrain from asking for a US-engineered regime change,” said Boroujerdi.

Even better established immigrant groups tend to differ over US foreign policy — American Jews are a good example — but the schisms in the Iranian-American community have been particularly acute and reflect positions honed before and during the 1979 revolution. Efforts to unite the diaspora behind a basic platform for democracy and human rights, such as the Charter 91 movement led by Iranian-Canadian intellectual Ramin Jahanbegloo, have not developed large followings so far.

Many Iranians both inside and outside the country would like to see an end to the Islamic Republic’s theocratic autocracy, but fear that what comes next could be even worse.

“The varied preferences for the opposition make sense,” Boroujerdi, a signatory of Charter 91, told Al-Monitor. “The Green Movement captured the attention of many younger Iranian-Americans who are no doubt included in this poll, and the memory of the [2009] uprising is still fresh in their minds. As such, it garners the most votes. Reza Pahlavi is popular among older expats who nostalgically remember the good old days under the Shah, and the MEK only appeals to its own hard-core base, since most Iranians can’t get over their cooperation with the Iraqi regime during the course of the [Iran-Iraq] war.”

Despite these divisions, a majority of Iranian-Americans — 59% — support US President Barack Obama’s policy toward the Iranian nuclear program, a policy that seeks to balance sanctions pressure with diplomacy while also retaining a military option. An even larger slice — 68% — supports lifting sanctions if the Iranian government reaches an agreement with the US and the wider international community that ensures its nuclear program is peaceful.

Not surprisingly, the welfare of ordinary Iranians is a paramount concern. Of those polled, 71% said they were concerned about civilian casualties if Iran’s nuclear facilities are attacked and 54% said such strikes would be ineffective and even encourage Iran to develop nuclear weapons.

Many Iranian-Americans appear to be looking for practical measures to assist their relatives and friends back home and to make it easier to conduct financial transactions and to travel back and forth from Iran.

Morad Ghorban, director of government affairs and policy for PAAIA, told Al-Monitor that in a previous poll conducted for his group in 2011, 73% of respondents backed the opening of a US Interests Section in Tehran staffed by American diplomats that could process visas for Iranians seeking to come to the US and provide other services to Iranians with dual nationality and their relatives.

A recent report by the Atlantic Council Iran Task Force recommends asking Iran to allow such an office to be opened in Tehran.

“It just makes sense,” Ghorban said, noting that the US has an interests section in Cuba even though the two countries still lack formal diplomatic ties.