To understand the deadlock in negotiations with Iran, the negotiating framework itself needs to be addressed, writes Mohammad Ali Shabani. 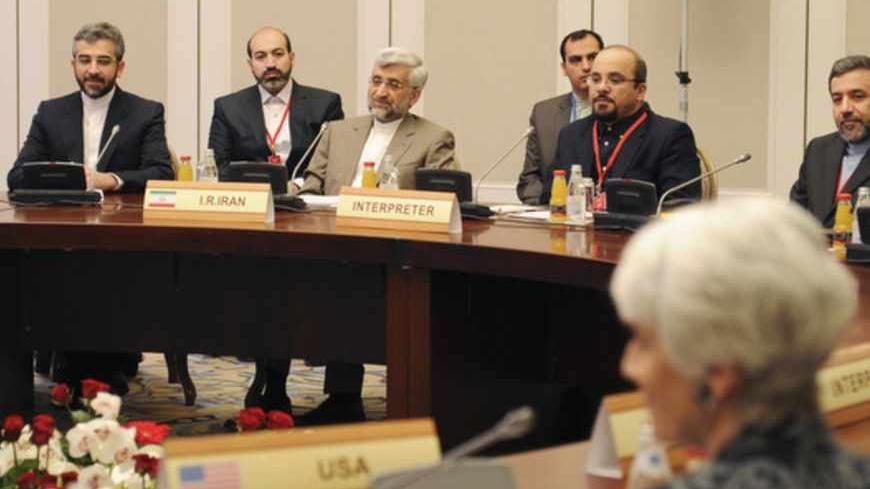 Despite the intense engagement between Iran and the P5+1 in Kazakhstan, we face continued deadlock. In the intermission until the next round of nuclear talks, it is useful to step away from the focus on how to reach an interim deal and look at the negotiating framework itself for challenges that need to be addressed.

Along this vein, it is fruitful for outside observers to gain an Iranian perspective on the utility of the P5+1 as a forum, the prospect of progress within this framework and how things can move from this setting to a bilateral discussion between Iran and the United States.

Before attempting to answer these questions, it should be noted that virtually all relevant Iranian stakeholders view the nuclear issue as being about Iran’s troubled relationship with America.

When it comes to views of the P5+1 in Tehran, the picture used to be cloudy, but now seems to have largely cleared.

Perspectives on the inclusion of Russia and China in the nuclear negotiations were once shaped by worldviews divided along partisan lines. Among the more fervent proponents of deep engagement with the West, it was no secret that this development was seen as a mistake.

On the other side of the spectrum, historically deep suspicion of Russian intentions in particular existed as well, although the earlier view was that inclusion of non-Western powers in the nuclear talks would help undermine American-led efforts to turn unilateral sanctions into multilateral penalties.

Which calculations underlie these perceptions of the current framework for nuclear talks?

According to one former senior diplomat in Tehran, interviewed on condition of anonymity, the “composition of the P5+1 does not harbor any hope for bringing a lasting solution for the [nuclear] file, as it is not in a capacity to do so,” pointing to the competing interests of the members of the group. The former diplomat emphasized that “the P5+1’s predecessor [EU-3] was shaped to prevent Iran’s referral to the UN Security Council at a time when the US was unwilling to engage with Iran. When the new grouping [P5+1] was proposed, Iran was under the illusion that Russia and China would take its side and prevent referral to the Security Council … the P5+1’s involvement has complicated the matter even more.”

This line of thinking was echoed by other figures interviewed for this article.

“Russia and China have so far found no harm in going along with the Western countries in confronting Iran,” a senior former diplomat turned think-tank scholar remarked. Current government officials approached for interview, while declining to go on the record, also noted the consequences of the P5+1’s members having competing interests.

The chief Iranian nuclear negotiator’s narrative is that the talks in Kazakhstan failed to make headway because the P5+1 failed to provide a road map for solving the nuclear issue ahead of an interim deal.

Considering how the P5+1 is largely viewed in Tehran, it shouldn’t come as a surprise that some wonder whether the group isn’t making an endgame explicit simply because it can’t agree on one.

“Under these circumstances, not much should be expected from the current talks until there is an opening in the Iran-US relationship,” one of the former senior diplomats interviewed remarked.

But how can Iran and the United States move toward a bilateral discussion?

People in Tehran recognize that jump-starting the US-Iran relationship while preventing sabotage of such a development is a real conundrum. Iranian figures such as former envoy Sadeq Kharrazi, widely believed to have been behind the 2003 "grand bargain" proposal to the United States, have been frank on this matter. In an op-ed published on the day of the nuclear talks in Almaty in February, he argued that “under the current circumstances … one cannot expect … a resumption of dialogue between Tehran and Washington in the near future. Fresh ideas should be put forward for the preparation of talks so that both countries will feel satisfied without compromising their principles.“

Kharrazi, nephew of one of Supreme Leader Sayyed Ali Khamenei’s foreign-policy advisors, went on to float one such “fresh idea.” In the op-ed, he argued that “one possibility which can pave the way for direct talks is to suspend unilateral US sanctions during the course of the talks. By so doing, the US will show its good will to convince Iran that it has no ulterior motive, … By the same token, the suspension … will be a good opportunity for Iran to do its part and engage in genuine and serious negotiations.”

Only weeks later, Khamenei declared that he is not opposed to direct talks with the United States, but implied conditions for such negotiations. Khamenei noted that if the Americans want to solve the nuclear issue, "The solution is easy: They should acknowledge Iran’s right to enrich uranium for peaceful purposes,” adding that the “solution we propose is that they should stop being hostile toward the Iranian nation in words and in action.” In the same speech,  Khamenei brought up one example of such “hostile actions” as the “harsh and widespread oil and banking sanctions on Iran.”

One of the many reasons why a price is exacted for agreement to direct talks is that such a development is seen as a boon to the United States. Speaking on the matter on Feb. 16, Ayatollah Khamenei underlined that Washington’s “purpose is not to solve the problems. … They want to say to Muslim nations, ‘This was the Islamic Republic with all that intense determination and resistance. But finally, it had to negotiate with us. Even the Iranian nation ended up like this. What can you do?’”

There are, of course, legal problems associated with sanctions removal. When brought up with an aide to a senior figure in Tehran, the answer was that there is awareness of the legal aspects of the penalties, but that “in order to show its good will, the US needs to do something, and suspending sanctions for the duration of the talks is one possibility.”

Ominously, the P5+1 did not offer to recognize Iran’s right to enrich uranium or put oil and banking sanctions on the table in Kazakhstan. Neither did the group provide a road map for how Iran can achieve those objectives. A former Iranian nuclear negotiator also interviewed on condition of anonymity noted that “asking Iran to stop 20% enrichment [under current circumstances] could be interpreted as recognition of enrichment below 5% ... or as the first step for UNSC resolutions on total suspension.”

So what can be concluded from all this? Two things become particularly apparent — especially as US lawmakers move to impose a complete embargo on Tehran, and the until recently blacklisted Iranian opposition group Mujahedin-e-Khalq Organization is due to open an office in Washington.

There will be no progress on the nuclear issue unless Iran and the United States at least agree to come to agreement. Moreover, leaders of both countries need to pay attention to the millennia-old Zoroastrian mantra: good thoughts, good words, good deeds. For a direct dialogue between Tehran and Washington to initiate, all three of these basic components of Zoroastrian morality must be upheld — both in public and in private.

Mohammad Ali Shabani is a doctoral researcher at the School of Oriental & African Studies, University of London and editor of the Iranian Review of Foreign Affairs. He has worked in media organizations and think tanks in Iran. He tweets as @mashabani.