The Iranian elite is already absorbed in pre-presidential election politicking and is in no hurry to resume nuclear talks as long as the offer on the table does not include significant sanctions relief, writes Mohammad Ali Shabani. 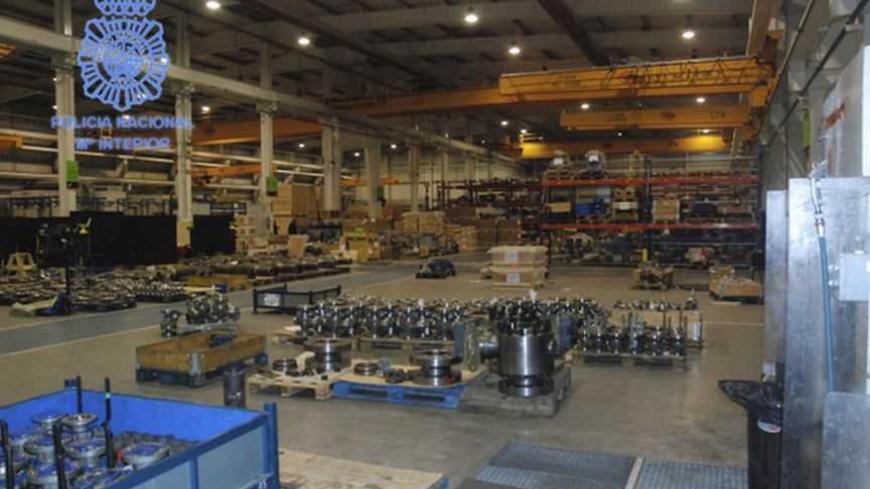 Seized highly corrosion-resistant valves are seen inside a warehouse in an unknown location in this handout picture provided by the Spanish police on Jan. 11, 2013. The police arrested two men and seized the contents of a truck bound for Iran loaded with materials destined for use in the Islamic state's nuclear program, the Interior Ministry said. - Reuters/Spanish police

Although attention in the West remains focused on Iran’s nuclear program, talk among the Iranian elite has already turned toward Iranian presidential elections that could have a major impact on the current diplomatic impasse and the Islamic Republic’s relations with the United States.

On a just-concluded visit to Tehran, I talked to dozens of current and former officials, think-tank scholars and journalists. With more than five months to go until the polls, Iran is already abuzz with rumors about who is going to be the next president of the Islamic Republic — and the implications of that choice.

Make no mistake: The nuclear issue is intricately linked to the upcoming elections and their outcome. However, the fact that dialogue with the P5+1 (the United States, Britain, France, China, Russia and Germany) did not seem to be on the top of the agenda in Tehran suggests three things:

First, if the aim of sanctions is to get the Iranian leadership to do a sudden, 180-degree turn and make major concessions, they have fundamentally failed.

Tehran can be very confusing to its visitors. It’s teeming with building cranes and traffic is as horrendous as ever. At the same time, it quickly becomes painfully obvious that sanctions are taking a toll on the livelihoods of ordinary Iranians. Compared with my last visit in August, most goods — and especially those from abroad — were a lot more pricey, apart from staple items whose prices are fixed by the government.

Coupled with a surge in the cost of housing, the situation is that “Ali the Plumber” is worse off, compared with last year, but not even close to as battered as “Hussein the Engineer.” The sanctions are pummeling the main agents of political change — the middle class. The government is making cuts and resorting to other efforts to fill budget gaps so that it can support a growing number of people who are increasingly dependent on it.

At the same time, views on the nuclear issue have not really changed. There is no talk of surrender. Instead, several diplomats privately suggested that Iran make a move to seize back the initiative. One former senior reformist official who spoke on condition of anonymity proposed threatening to withdraw from the Nuclear Non-Proliferation Treaty to get attention.

The bottom line is that the sanctions are having an effect, but not the kind Western policymakers have in mind. This brings me to a second point:

I asked repeatedly why Iran is dragging its feet on agreeing to a date and place for a new round of nuclear talks. Explanations ranged from waiting for President Barack Obama’s new secretary of state and defense secretary to be confirmed, to pre-negotiation negotiations and Iran’s desire to show that the sanctions have not dragged it to the table. But the single most convincing explanation was that the Islamic Republic wants more than what it’s likely to be offered.

Iran also wants to avoid blame for further diplomatic failure. This is one reason why Iran wants to know what’s on the table before returning to negotiations. The Iranian assumption is that the P5+1, under American pressure, is not going to offer anything substantively different from what it proposed in Moscow last year. While Tehran’s reaction to this is milder than Albert Einstein’s famous saying that repeating something while expecting a different result is insanity, the late proverbial father of the atomic bomb has a point.

Many of the most punishing financial and oil sanctions were implemented after Iran’s decision to start enriching uranium to 19.75% three years ago. Expecting Iran to cease enrichment to this level, ship out its entire stockpile of such material and shut down production in exchange for no relief from oil or financial sanctions is not logical. In the eyes of Tehran, it would be tantamount to asking Iran to turn back the clock more than the West would be doing. This is not the reciprocity Iran deems fundamental to the mutual respect it desires.

On a domestic level, factionalism and the upper echelon’s preoccupation with maintaining maximum stability ahead of the June 14 presidential polls is also likely diminishing the probability of an imminent, significant deal.

Thus, Iran’s haggling about the venue  of the talks — with its latest proposal that Cairo host the meeting — suggests that there is little hope for progress at this point. Instead, it seems as if the Islamic Republic wants to squeeze some juice out of a dry lemon by throwing a bone to Egyptians hungry for more political relevance — and promoting Iran’s desire to restore full diplomatic relations with Egypt.

This brings me to my third observation:

With Tehran in no hurry to make a deal and already embroiled in pre-election buzz, it is clear that the real window for serious diplomacy will come after the Iranian presidential polls. It is also likely that the nature of this dialogue will change.

On previous visits, it was made abundantly clear to me that Iranian officials regard the United States as crucial to resolving the nuclear issue. However, on this visit, for the first time, I heard open declarations that the real issue was not so much about the nuclear program as about normalization of ties with Washington.

"After having seen our clout surge following the removal of Saddam and the Taliban, the Americans have increasingly turned to the nuclear issue to decimate our influence and role in the region,” another senior former reformist official told me. His thinking was echoed by figures from across the political spectrum, who all insisted that the nuclear issue is really about putting Iran in its place, rather than about Iranian nuclear capabilities. “We crossed the threshold of being able to produce enough nuclear material for a bomb several years ago,” said a former senior diplomat-turned-think tank scholar who also spoke on condition of anonymity.

What follows from this line of thinking is that whatever dialogue might resume after June will likely seek to address not only the nuclear program but the larger issue of relations with the United States. The sanctions have arguably accelerated recognition of this dilemma, with the taboo about normalization of ties with the United States broken in the public debate in recent months.

The best that can be expected until the summer is to keep the nuclear issue from spiraling out of control. When and if Iran and the P5+1 finally meet this winter, they will likely continue driving down the diplomatic track in first gear.

Mohammad Ali Shabani is a doctoral researcher at the School of Oriental & African Studies, University of London;  Editor of the Iranian Review of Foreign Affairs; and a former Newsroom Editor for Press TV.