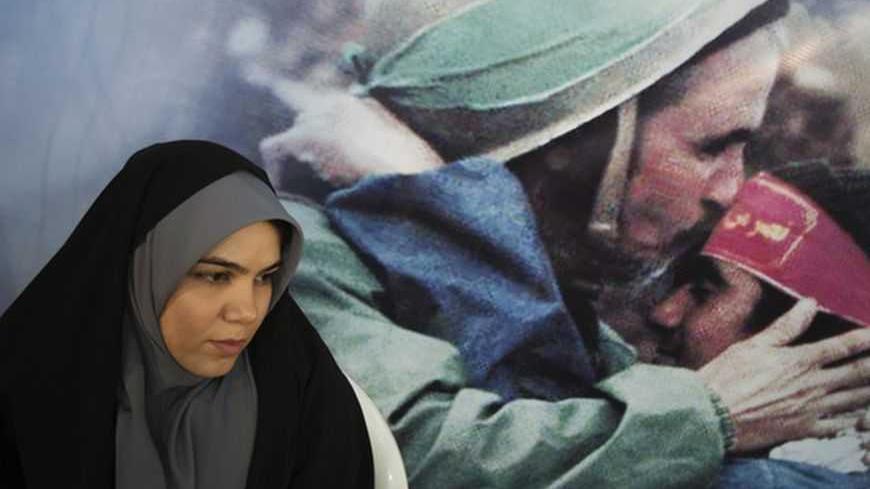 An election official sits in front of an image of Iranian warriors at a mosque, used as a polling station, during the parliamentary election in central Tehran March 2, 2012. - REUTERS/Morteza Nikoubazl

A recent Gallup poll shows that 63% of Iranians think their government should continue its efforts to develop nuclear capabilities — even though more than eight out of 10 say their personal livelihoods have been hurt by the West’s sanctions. At the same time, 47% of the poll’s respondents primarily blame the United States for the penalties Iran faces. In comparison, one in 10 point the finger at their own government. The poll, which was conducted between Dec. 26 and Jan. 10, bases its results on telephone interviews with 1,000 adults throughout Iran.

Those who accept the survey’s findings see it as part of a long-standing trend of popular support for Iran’s nuclear ambitions, confirmed by a series of similar polls with comparable results over the years. Those who reject the survey’s findings tend to question the accuracy of polls carried out in places like Iran and point to the limited public debate on the nuclear program within the Islamic Republic.

Let’s assume that the Gallup poll accurately reflects popular attitudes in Iran. What kind of window does it provide into the dynamics that decision-makers in Tehran are facing?

In the West, the dominant view of the implications of the Iranian atomic program's continued popularity is that the Islamic Republic will maintain its nuclear drive. While this assumption is reasonable, its one-sided approach to the underlying dynamics of Iranian decision-making renders it inadequate. The assumption is that popular support for the expansion of Iran’s nuclear program is giving the Islamic Republic carte blanche to pursue its current path.

This approach fails to account for other consequences of the popularity of the Iranian nuclear program.

Popular support in the context of the nuclear issue is a double-edged sword for the Islamic Republic. On one hand, it does buoy Iran's pursuit of its current path. However, the popularity of the atomic program conversely constrains the Iranian government’s options.

While face-saving is important for all parties involved in the nuclear issue, it is particularly vital to the Iranian leadership. After a decade-long confrontation with the West over its nuclear ambitions, the Islamic Republic can’t cry uncle — even if it wanted to. For better or worse, the manner in which the nuclear program has been elevated from a project to diversify energy sources to a matter of national prestige has painted the Iranian government into a corner.

Add in the cultural context, which further emphasizes the importance of saving face, and you have a toxic situation in which the Islamic Republic has no choice but to continue down its current path — unless it is offered a face-saving way out.

In his memoir National Security and Nuclear Diplomacy, former Iranian chief negotiator Hassan Rowhani offers a window into the role of public opinion in decision-making on the nuclear issue. He explains how “we invited a member of the [parliament’s] national-security commission to the meetings of the [Supreme National Security] Council’s committee on foreign policy […] Public opinion regarding different issues was usually brought up by the MPs participating in the sessions. Therefore, their presence was a necessity. For more on public opinion, we also used to consult intelligence sources and opinion polls. For instance, on the nuclear issue, polls were frequently conducted, the results of which we took into account.”

Rowhani’s account of decision-making within Iran’s Supreme National Security Council, which handles the nuclear file, confirms that the Islamic Republic is not oblivious to public opinion — at least when it comes to the nuclear issue.

In the context of the current nuclear negotiations, it becomes clear that Iran is unable to agree to a deal it can’t sell at home — especially ahead of its crucial presidential elections in June. The same applies to the West, which needs to save face too.

Another key stumbling block to progress in talks between Iran and the P5+1 (the five permanent members of the UN Security Council plus Germany) is that each side feels that time is on its side.

The West views its sanctions as ultimately weakening the Islamic Republic. Within Iran, views on this matter are mixed. Some concur with the Western perception of the situation, while more dominant voices point to the strengthening of the state.

The Gallup poll — as well as other surveys — put a spotlight on how the Iranian government is largely succeeding in deflecting blame for the sanctions. While it faces hefty criticism over its handling of the economic situation, this shouldn’t be construed as blame for the penalties ordinary Iranians are facing. Considering how the main victims of the Western pressure are members of the Iranian middle class — a major source of political opposition and a considerable soft-power asset of the West — it becomes evident why many of those in charge in Tehran view time as being on their side.

The bottom line is that polls like Gallup’s should be viewed as a reminder of why Western decision-makers need to understand the full effects of the popularity of the Iranian nuclear program — including the constraining aspects of this phenomenon. Western recognition that public support for Iran’s nuclear activities equally free and tie the Islamic Republic’s hands is crucial for understanding the calculations of Iranian decision-makers.

More importantly, Western decision-makers need to pay more attention to state-society dynamics and the steady erosion of their soft power in the Islamic Republic. In the end, it is the Iranian middle class — the main victim of the sanctions — which will make or break Western hopes for Iran.

Mohammad Ali Shabani is a doctoral researcher at the School of Oriental & African Studies, University of London and editor of the Iranian Review of Foreign Affairs. He has worked in media organizations and think tanks in Iran.