Following the funerals of Hezbollah fighters killed in Syria while fighting for the regime of President Bashar al-Assad, some Lebanese Shiites are questioning their exact role in the conflict, writes Elie Hajj. 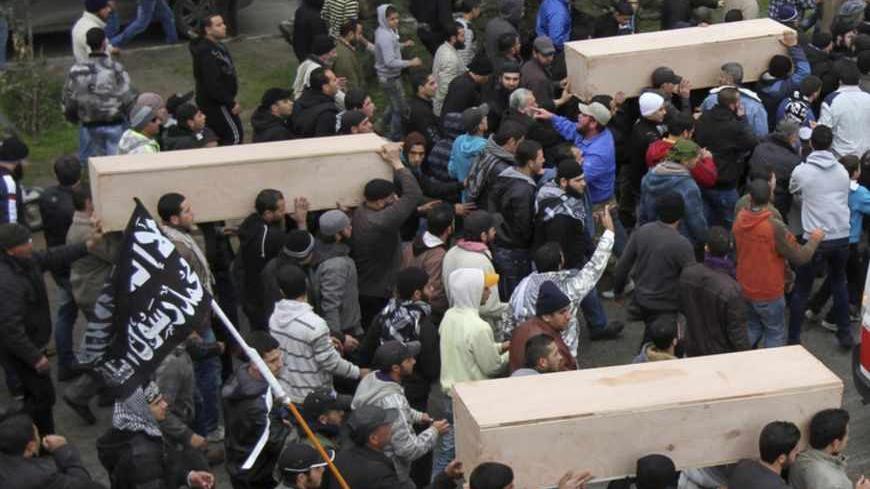 Informed political sources in Lebanon expect Hezbollah won't impede the formation of a new government headed by Prime Minister-designate Tammam Salam in the coming days, given the party's interest in engaging on two heated fronts at the same time: one that is military, in Syria, and another that is political, in Lebanon.

Shiite sources revealed to Al-Monitor that a state of confusion is clearly prevalent in Hezbollah’s ranks, be it in the south, the southern suburbs of Beirut or the Bekaa Valley. This confusion is due to the party’s position regarding the ongoing hostilities in Syria.

According to highly politicized groups that support the Hezbollah leadership, the lack of support for the Syrian regime, which has supported Hezbollah and contributed to its steady ascension at all levels since the 1980s, can be described as disloyalty to say the least. According to these sources, the fact is that Syria is currently in the middle of a major war that regional and foreign powers are waging — via their support for terrorist groups — in an attempt to overthrow the regime of Syrian President Bashar al-Assad, which stands in the face of Israel and is allied with the Islamic Republic of Iran. Therefore, these foreign interests want to get rid of the Syrian leadership. They want to serve Israel and their allies both in the region and across the world.

It should be noted that the “terrorist groups” in question do not discriminate, according to the sources, between those who “are different from them” in their religion, sect or ideology levels, be they in Syria or in Lebanon.

This operates both at the moral and ethical levels. On the practical level, those who share this opinion believe that the fall of the Syrian regime — if it happens — will have negative repercussions on Hezbollah and its allies in the “axis of resistance” to Israel in Lebanon. Therefore, the party's decision to support its historical ally, namely the Assad regime, shows its desire to prevent such an eventuality.

It is needless to explain the correlation between the two sides, let alone whether or not the decision to provide support is partly related to Tehran's decision to stand by its Syrian ally, and the nearest road to that is invisible support from the “Hezbollah” military units fighting under the banner of Assad in some areas neighboring the northern and eastern Lebanese border as in Damascus, which is only two hours away from Beirut by car.

In other words, what is happening in Syria is a battle for the fate of the party, if not today then in the long term. It is a battle that concerns all of the groups in the crescent that includes Iran, Iraq, Syria and Lebanon.

Those who have a different view say, according to the same sources, that the participation in the hostilities raging in Syria is an issue that cannot be hidden, especially with the increasing arrival of bodies of fighters from the “resistance” to the Lebanese villages and towns, where funerals are held for them with large processions.

Even if Hezbollah does not hide the news of the killing of members of its units, the sporadic news that there is a funeral for a fighter increases the number of those participating in the funerals and paves the way for rumors about dozens of Lebanese who are affiliated with the party and who are being killed in Syria.

There is a real concern, one that is close to obsession, that has started to prevail in pro-Hezbollah Shiite areas on the fate of sons and husbands who have joined the resistance on the basis that it was against Israel. Their parents are not very convinced that they are being killed in Syria for the sake of “jihad duty,” a term used by the secretary general of Hezbollah, Hassan Nasrallah, as he was putting forth the party's position and talking about the killing of some of its members in Syria.

It should be noted that he attributed the issue to the fact that there are villages inside Syrian territory along the northern border with Lebanon that happened to be Lebanese supporters of Hezbollah. As he said, these villages are defending themselves in the face of terrorist attacks and they are being assisted by some Lebanese, given the links between them.

But this explanation does not hold water. The proof is that there was a funeral for fighters who, according to the party, were killed during their defense of the Sayyeda Zeinab shrine, which is frequented by Shiites and which is an important historical site in Damascus.

The most recent killed fighter is from the Ghalmoosh family, and a funeral was held for him in Beirut's southern suburbs last Monday [April 8]. Media outlets covered the news. Thus, the issue is no longer just a contribution to the defense of the Lebanese living in Syria.

An influential Shiite figure told Al-Monitor that she has repeatedly offered her condolences in the last few days to the parents of fighters in the “resistance” and its affiliated divisions. The figure refused to give her name or specify the number of those to whose parents she offered her condolences. However, she made ​​it clear that they were killed in al-Qassir and Damascus. She said that there are many parents in bad psychological states. Moreover, she said that the party cadres are having difficulty justifying the reasons behind the intervention in the ongoing battles in Syria. This social situation cannot be dealt with through increased compensation allocated to the parents and families of the “martyrs,” especially given that this situation is bound to deteriorate further.

The figure said that the party's military intervention in Syria — whatever its size — will increase the social rift between Hezbollah and the Sunni community in Lebanon. Sunnis strongly support the majority of the opposition and sympathize with them to an extent that has pushed groups of young men — who are neither organized nor trained — to join rebels to help them within Syria, thus resulting in the death or imprisonment of a number of them.

The same applies to the Shiite community's relations with the Arab world, especially the Gulf states, which strongly oppose the Assad regime and which are providing the rebels with various types of support.

She added that the objections in the Shiite community can be absorbed as long as the human casualties are limited, but the issue has opened the door for rumors, questions and objections to Hezbollah’s policy. Some of those who had sons or relatives who were members of Hezbollah and died in Syria cannot help but ponder: Are our sons being killed to defend the Sayyeda Zeinab shrine in Damascus or the regime of President Assad? Even at the height of the Umayyad dynasty, the shrine was not touched, so why should we entrust ourselves with this task now?

The figure finally said that Lebanese Speaker Nabih Berri has recently ordered officials in the Amal movement, which he heads, to withdraw from Syria all the movement members in the “resistance divisions” led by Hezbollah and make them return to Lebanon.