The increase in security concerns around the war in Syria has led to a sharp rise in crime in Lebanon, writes Elie Hajj. 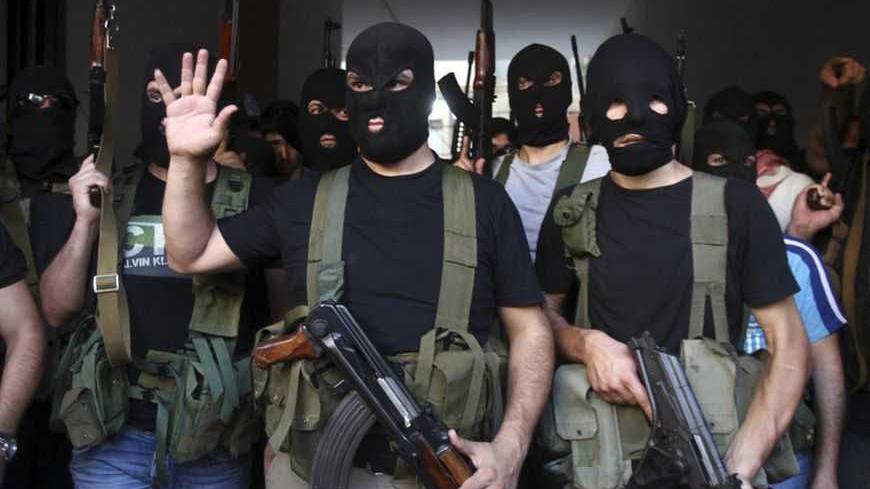 Shiite masked gunmen from the Meqdad clan gather at the Meqdad family's association headquarters in the southern suburbs of Beirut, Aug. 15, 2012. - REUTERS/Khalil Hassan

The Lebanese people have been concerned for a while now due to the amount of non-political crimes being committed by organized groups seeking to make money. Meanwhile, security forces are failing to put an end to these acts, as their perpetrators enjoy the protection of various people.

These crimes — especially the kidnapping of people, including children, to ask for a ransom in exchange for their release — have been added to the country’s already existing acts of violence, which reflect the political and sectarian conflict over key issues plaguing the country. These contentious issues include the ongoing crisis in Syria, the issue of Hezbollah's weapons, and Lebanon's place in the great conflict that the Middle East has been grappling with for years.

This situation prompted Lebanese President Michel Suleiman to request that a meeting of the Supreme Defense Council be convened, which met at the Presidential Palace on the evening of Wednesday, Feb. 27. The meeting was attended by the president, the prime minister, the ministers concerned with security, along with security chiefs. As usual, an ambiguous statement was issued after the meeting, saying that the people who were in attendance "discussed the security situation, Israeli violations of the Lebanese sovereignty, and the situation in some areas that have recently experienced unrest — particularly the northern and eastern border areas," the border with Syria. They also discussed the "necessary measures needed to avoid intolerance and sectarianism."

However, contrary to the repetitive expressions included in the statement, it was learned that the meeting’s participants discussed very sensitive topics, based on reports issued by the security services. Those in attendance concluded that the security situation in Lebanon cannot be controlled without at least a minimum level of political consensus. Interior Minister Marwan Charbel went so far as to assert that the sectarian dispute — particularly between Sunnis and Shiites — makes it practically impossible to control the security situation.

This dispute is paralyzing the security forces and preventing them from carrying out the tasks they have been asked to complete, out of fear that they could drown in problems affecting them, their apparatus and the state in general. Charbel compared the situation to a father and a mother who are facing major problems and getting divorced. He said that no one would blame their children if they acted out; no one would ask them to live a normal life like other people.

Despite the fact that the meeting was aimed at discussing security issues, one of the participants called on political leaders and parties to encourage moderates in all sects. This participant said, "It is very important to support, for example, the head of the Future Movement, former Lebanese Prime Minister Saad al-Hariri. This is because Hariri, and similar figures from other sects serve as a moral barrier against extremism in the sects they represent. Let’s work with Hariri so that we avoid dealing later on with radical cleric Ahmed al-Assir and other Salafists and fundamentalists."

We learned that the participants agreed that the political crisis is serving as a natural incubator for the series of crimes, kidnappings, robberies, shootings and various attacks on the law and against citizens recently witnessed in the country. They also agreed that the military and security forces need major political support from all the main political forces in Lebanon. It should be noted that the Supreme Defense Council does not have any say in things that go beyond security issues. Moreover, sectarian tensions are beyond the control of the Lebanese people, as they are widely subject to external factors.

A security report received and discussed by senior state officials at a meeting of the Supreme Defense Council had mentioned a substantial increase in lawlessness, as the number of acts of robbery and kidnapping reached a record high. The report gave the example of the rate of car theft in the country. Although there had been an average of two cars stolen per day, it has increased to 15 cars stolen daily across the country. The report pointed to the arrest of a gang that admitted to stealing more than 60 four-wheel-drive cars and selling them in Syria, so that they could be used in the military activity that has been ongoing there for nearly two years.

The report included information about the involvement of two Lebanese parties in the hostilities taking place in Syria. One of these parties is very organized, while the other is unorganized but very enthusiastic, no longer hiding the fact that it participated in the fighting raging in Syria in one way or the other. The parties’ involvement is especially apparent, as members of both groups have died inside Syria. This situation is very volatile, particularly since there are no natural barriers on the border between Lebanon and Syria. This could lead to unthinkable consequences in the internal Lebanese arena in the absence of a swift solution. This solution can be reached by returning to the policy of "neutrality" and "self-distancing" adopted by Mikati's government regarding the developments in Lebanon’s conflict-ridden neighbor.

Moreover, the report cited concerning information about the widespread distribution of personal weapons, which are easy to use. It also included information related to illegal construction projects that spread across the country, while the security forces are unable to do anything about them. The report tackled the disturbing rise in kidnappings for ransom, pointing out that those kidnappers who are known (reportedly numbering 37) enjoy safe havens that they can go to, in light of the spread of security outposts, which are constantly expanding in several regions. Lebanese Druze leader Walid Jumblatt was most eloquent in describing the scene. He said, "The growing cases of kidnappings suggest that we are living under the law of the jungle, as the political forces plunge in disputes, rivalry and the search for quotas."