Lebanon’s foreign minister, Adnan Mansour, draws criticism from both his own government and the Gulf states by calling for the reinstatement of Assad’s Syria in the Arab League, writes Elie Hajj. 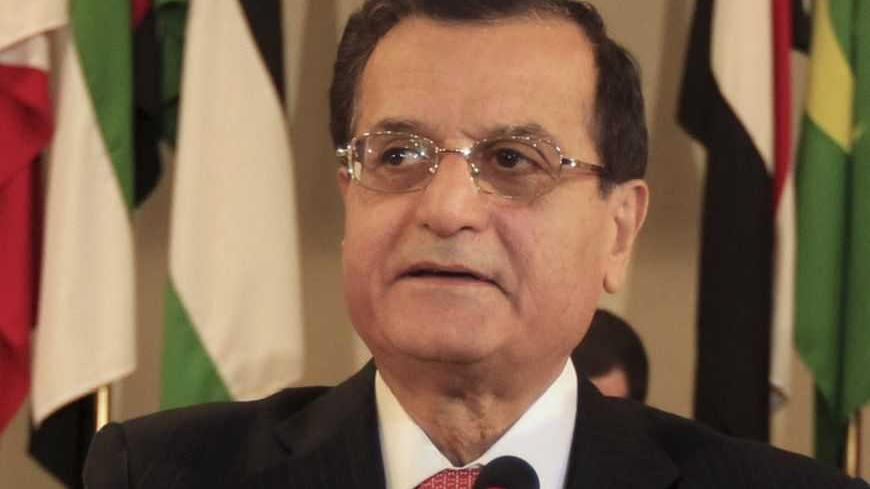 Lebanon's Foreign Minister Adnan Mansour attends an Arab League meeting in Cairo, March 6, 2013, where he called for Syria's suspension from the Arab League to be lifted. - REUTERS/Mohamed Abd El Ghany

The political memory of the Lebanese people is too short. They are easily agitated and react strongly to and show extensive interest in any event. No matter what the topic is, it takes them three days to forget it and move on.

This is precisely what happened with Minister of Foreign Affairs and Emigrants Adnan Mansour, who caused an uproar at the Council of Arab Foreign Ministers in Cairo by calling for the reinstatement of Bashar al-Assad’s Syria in the Arab League.

The position taken by the Lebanese minister during a meeting of Arab ministers in Cairo on Wednesday came as a surprise, as the ministers were looking to draft a request to the National Coalition for Syrian Revolutionary and Opposition Forces to form an executive body to occupy Syria's seat at the Arab League. The coalition would also participate in the league’s organizations and boards, in order to take part in the Arab Summit in Doha on the 26th and 27th of this month.

The Lebanese minister took an individual initiative and made a speech calling on the Arabs to reverse the decision to suspend Syria's membership in the league. He abstained from voting, however, on the decision to make the opposition the representatives of Syria [in the Arab League], pursuant to the Lebanese government's “self-distancing” policy regarding the Syrian conflict. The Lebanese are divided over the conflict in neighboring Syria, which threatens to bring tension to a country whose capital, Beirut, is less than two hours away from Damascus by car.

Mansour, who is affiliated with Hezbollah and the Amal movement, distanced himself and abstained from voting on the resolution or expressing reservations, as did his Iraqi and Algerian counterparts. Thus, the objection was against his speech, not his position. Officials in Beirut, especially the president and the prime minister, were seen not to receive well the speech of Qatar's prime minister and foreign minister, Sheik Hamad bin Jassim, which followed Mansour's speech. Hamad launched a fierce attack on the Syrian regime, accusing it of killing its people and not complying with Arab and international resolutions, bringing Syria to this current situation.

According to Mansour, Hamad’s speech was not a response to what he had said. The impression in Lebanon, however, was somewhat different. This is made more significant by the fact that the Gulf states — in which large numbers of Lebanese people work — have been hit by a wave of discontent expressed in a statement issued by the General Secretariat of the Gulf Cooperation Council in protest at the positions of some Lebanese leaders, parties and movements, all of which are from the March 8 coalition led by Hezbollah. These positions are related to what is happening in Bahrain and other Gulf countries, and they mock the leaders of those countries. For example, a photo of the Saudi king depicting him as the king in a deck of cards was put up in the largely Christian eastern suburbs of Beirut.

A week ago, the resentment felt in the Gulf capitals led to the expulsion of Lebanese citizens with certain political affiliations, especially supporters of Hezbollah and the Free Patriotic Movement headed by MP Gen. Michel Aoun.

As a result of this, Lebanese Prime Minister Najib Mikati’s anger has strengthened, as he continues to attempt to restore relations with the Gulf countries. The latter have banned their nationals from going to Lebanon and have largely suspended their investments in the country, which has contributed to the decline in economic growth from 5% to only 1%.

The fierce political and media campaign conducted by the opposition March 14 coalition — involving figures ranging from former Prime Minister Saad Hariri to the last news editor who supports the opposition — leaped on the point that Mansour was described as the “foreign minister of Iran and the Syrian regime,” and not that of Lebanon. Mikati has found himself in a critical situation, since he was looking forward to running again in parliamentary elections in his hometown of Tripoli — a Sunni majority city — even though he must submit the resignation of his government. This government, whose power has been exhausted, and in which contradictions and the inability to find solutions to countless crises have prevailed, is heavily burdening him.

Despite the fact that Hezbollah has provided Mansour with political and media support to confront the political and media campaign against him from both inside and outside the government, the prime minister seemed not to care. He seemed to be defending his image, after he announced through "sources close to him" that he had sent a letter to the foreign minister asking him to comply with the policy of the government, of which he is a member, regarding the Syrian conflict.

On the following day, Mansour said that he had not received any letters from Mikati. Immediately following this, the prime minister’s sources threatened to disclose the content of the letter, which pushed Mansour to admit that a letter was sent to the Foreign Ministry, but he did not know about it when he was asked. He explained that it was a political campaign designed to overthrow the government.

As usual, small and large government and political differences end at the hands of President Michel Suleiman, who has excelled in his role as "the referee of the Republic"; a republic that it is difficult to preside over and impossible to rule. He summoned the foreign minister and told him that every official in the state must comply with the policy of the state he represents.

As such, the page of a crisis was turned. This crisis was capable of overthrowing Mikati’s government, if Arabs, the West, and even the internal opposition actually want to do so prior to parliamentary elections, scheduled in June, under the constitution. Yet, the fate of the elections is still at stake, for the simple reason that there is no agreement on the law under which the elections will be held.