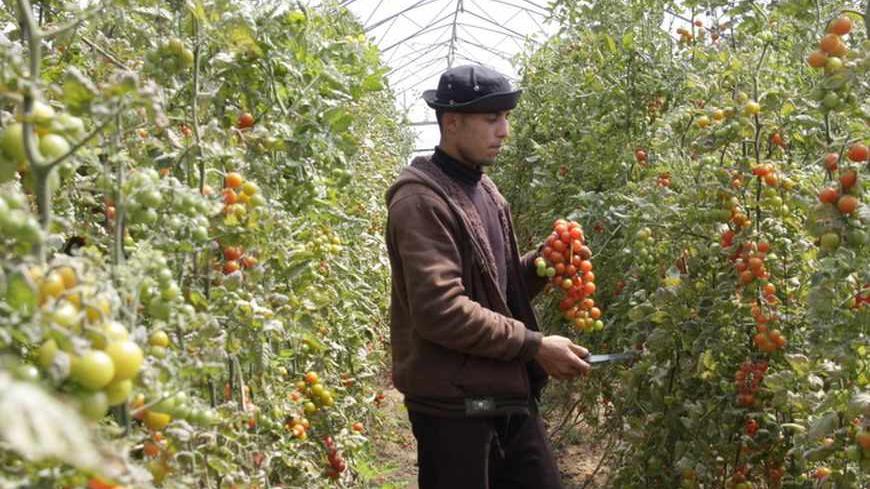 For Jamal Abu al-Naja, a father of 14, farming is like breathing. Having been in this occupation for more than 12 years, he recently planted herbs intended for European markets, attempting to defy Israeli restrictions on exports.

Piles of green basil and mint have ripened at Abu al-Naja’s field that he rented from the government in the middle of Gaza Strip, ready for export. But the plants were not to be loaded onto trucks for export. Instead, they were to be burned after becoming rotten due to Israel’s closure of the only commercial crossing point connecting it with Gaza.

Goods from the Palestinian side usually go through the Israeli border crossing of Kerem Shalom at the southern Gaza strip. But the border often closes each time the security situation deteriorates.

By the time Abu al-Naja got his three tons of basil and mint ready for export, Israel claimed that rockets were fired from Gaza towards an Israeli city. Consequently, the border was closed to all the goods, following another two weeks of closure due to Jewish holidays. Abu al-Naja estimated his loss at over $15,000.

“When I saw my crops burning in front of my eyes, I felt that I’m burning both my money and efforts; it was heartbreaking,” Abu al-Naja said while moving inside the mint greenhouse.

Abu al-Naja, along with a few other farmers, came up with the idea when they went to Europe for the first time to take an agricultural course. There, they saw new herbs which they had never had in Gaza, yet could grow there. Abu al-Naja thought that it would be a profitable project because herbs were not seasonal like paprika and cherry tomatoes, which he already raised, meaning he could keep exporting all year-round.

“I thought that it would be a really good idea if we planted such herbs in Gaza; especially, with their high prices in Europe and the affordable facilities in Gaza,” Abu al-Naja told Al-Monitor.

The five-member team began their project in August 2012. Among the herbs he added to those he already raised were sweet basil and garlic leaves. The results were impressive.

But shortly after that, Israel waged a severe, eight-day offensive on Gaza in November, which denied him access to the farms, with the herbs rotting in the meantime. That was Abu al-Naja’s first loss, but not his last.

After the November assault, Hamas, along with other Palestinian resistance factions, reached an Egyptian-brokered cease-fire. Palestinian factions agreed to stop firing rockets towards Israel, while the latter agreed to ease the siege on the borders.

Seeming to make it better for farmers, surprisingly, the cease-fire made things worse, according to Abu al-Naja’s fellow grower Abu Muhammad Qahwaji.

“Before the cease-fire, the border wasn’t affected by every little rocket being fired from Gaza towards Israel, but now, with having an agreement to stop these rockets, Israel deals with them as a violation that it should instantly react to,” Qahwaji noted.

The farming sector, like other industries, has always suffered due to the political situation in Gaza. In 2006, Hamas captured Israeli soldier Gilad Shalit in a cross-border raid, and then Israel introduced restrictions on exports as a result. A year later, Hamas took over Gaza, and Israel imposed a near-total blockade on the coastal enclave, banning any kind of exports and only limited amounts of food and basic materials.

One result of the blockade was that Israeli raw materials of high quality had to be replaced by poorer quality Egyptian materials, which were more expensive because they had been smuggled through the tunnels along the Egyptian border. This had an adverse effect on the agricultural industry, which consequently suffered in quality produce and quantity.

But after Israel attacked the Turkish humanitarian flotilla, the Mavi Marmara, in 2010, and killed nine activists, Israel started to gradually ease its blockade on Gaza. Farmers found some room to move.

For Abu al-Naja, the project is a form of resistance. “When I have something good to export, I can call upon the world to help me to open the borders of Gaza. Otherwise, Israel will find no good reason to open them in front of my goods,” Abu Al-Naja said.

The government farms are located on areas called al-Muhararat, which means liberated lands, as they were once Israeli settlements before Israel withdrew its troops and settlers from Gaza in 2005.

Tens of farmers invested in al-Muhararat once they were liberated, even those who had their own farms. The farms at al-Muhararat are expansive, far away from populated areas, with plenty of options for planting.

Abu al-Naja pays the government $1,000 per each 1,000 square meters, and he’s now renting 5,000 square meters. He’s also hired 40 workers who are paid at least $15 a day, regardless of whether the crops are going to be exported or not.

Farmers have been paying the price of the political conflict, frustrating farmers like Abu al-Naja who feel they’re constantly getting the dirty end of the stick.

“I wish that farming will be put aside from the political situation. I’m a man who only wants to live and support my family.”