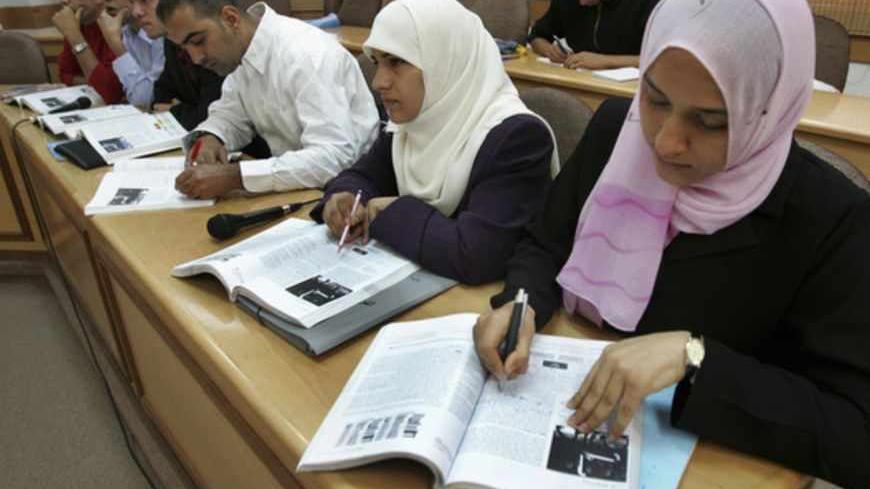 “I was completely bereft when he pulled me by my hand and embraced me. … I felt warmth emanating from his chest.” This sentence in a short story titled “Love in War” was enough for Gaza's Al-Aqsa University to launch an investigation into faculty member Dr. Khoder Mahjez. Mahjez teaches a course titled “Literature and Modern Criticism” at the Faculty of Arts in Al-Aqsa University. The investigations began following a complaint filed by a female student, who claimed that the professor used obscene words during the lecture.

In an interview over the phone with Al-Monitor, Mahjez said that the obscene words — which he was accused of using by the investigation commission during the interrogation attended by the dean of the Faculty of Arts and a legal advisor — were present in a story he had used as an example in his book, which carries the same name as the course. He added that there had been objections to the use of certain words — such as "women," "sons of a bitch" and "Jews" — as opposed to using terms with ideological connotations that are preferable to the university, such as "sons of monkeys" and "pigs."

"They hate poetry, literature and all that has to do with creativity and life," he said.

Mahjez added that although he retired last year, it is customary for retired teachers to continue to be allocated a few hours of teaching. Yet he was blackmailed, he said, by the University Board of Directors, who threatened to publish a statement that would tarnish his reputation if he did not leave the university. Thus, he resigned.

He explained that his story spread when a journalist friend published it in the local newspaper. This started a war not only with the university administration, but also with the Hamas movement that has been managing the university for years.

Salam al-Agha, the president of Al-Aqsa University, told Al-Monitor that he can guarantee that not once over the past two years did the university form a committee to monitor the freedoms of any student or academic because of their point of view. However, in this case, the committee was formed because the student complained about Mahjez.

He added that he was ready to disclose the student’s complaint to the press. He repeated that Mahjez had used what he described as “obscene” expressions during his lecture, such as, "He cracked her bones when he embraced her," and other terms such as "nightgowns."

Agha added that his university grants students and teachers the right to debate more than any other university in Gaza. He also said that Mahjez cannot be fired because he is already retired, stressing that the majority of members of the investigation committee are affiliated with the Fatah movement, which represents 70% of the university.

Dr. Atef Abu Seif is a writer and academic who met with Al-Monitor in a cafe in Gaza. Abu Seif believes that Al-Aqsa University has undergone a "cleansing," in every sense of the word. All the faculties' deans have brought changes with them, and certain ideologies have been imposed on the university, which made it — like other Palestinian universities — part of the conflict in the street. Previously, Palestinian universities used to be a beacon of creativity, when student leaders used to be at the head of the Palestinian parties and the Palestinian Liberation Organization.

"Previously, the Israeli security department used to monitor academic freedoms, while today the Palestinian security apparatus [has taken on this role]," he added.

It is true that students are monitoring their teachers, but they are also being monitored by someone else. Muhannad Abdul Bari, 22, told Al-Monitor that he graduated last year from one of Gaza's universities after having long suffered from threats against him. He explained that during one of the classes he discussed the issue of the Islamic state. It was not long before he was summoned by the university's security department, which is affiliated with the Interior Ministry, and warned that the intellectual security department was monitoring his activities and discussions.

According to statistics released by the Ministry of Education and Higher Education in 2013, there are 29 licensed higher-education institutions in the Gaza Strip. These include colleges and universities, both public and private, with 103,468 students.

Al-Azhar University is an important university in Gaza, although it is among those that suffer from a political divide. Dr. Ayub Osman, a professor at Al-Azhar, was dismissed from his post as a result of his articles criticizing the university. However, he has recently returned to the university upon the decision of the Attorney General.

For an example of his critique, here is an excerpt from an article that was published in January on al-Hiwar al-Moutamaden: "There is something puzzling in this university. Its problem lies in its leaders, who continue to commit errors and bitter experiences without learning from them."

Awni Abu Semaan, assistant deputy president for academic affairs at Al-Azhar University, said the university is open to any criticism, but when it reaches the point of slander and defamation against the university outside the framework of proper criticism, then a major question is raised.

Speaking to Al-Monitor in his office, Semaan added that the university includes around 14,000 students and 350 academics, making it fertile soil for different ideologies of all kinds. The university does not impose a specific ideology on anyone, as is sometimes the case at other universities.

Students do not argue

In a study published by Dr. Adel al-Asta in Ro'ya Magazine titled, "An-Najah University in Palestine is a model when it comes to academic freedoms," he said that academic freedoms in the universities of the West Bank and the Gaza Strip are governed by three powers: moral power, set by society; political power, set by the ruling authorities; and religious power.

Yafa Mustafa is a 20-year-old student at one of the Islamic universities. She complains about science books which are rife with biased views, adding that during class debates, some professors do not accept other opinions and consider their own to be undisputed, which intimidates some students and prevents them from taking part in the discussion.

"Unfortunately, many students are ignorant of history and sciences, and therefore do not argue about anything. They just accept everything they hear from teachers," she said.

Abu Seif defines academic freedom as the freedom of the professor to speak his or her mind, even if it conflicts with policies. However, this freedom must also include the right of students to freely debate ideas with teachers. He stressed that the relationship between students and teachers has broken down due to the absence of such freedom, which affected the credibility of science and caused a moral crisis.

Abu Seif believes that the absence of student elections for more than six years has resulted in the restriction of academic freedom and the creativity, limited the role of the university and linked it to the worsening political crisis instead of seeking a solution.

Agha, the president of Al-Aqsa University, which includes 26,000 students and more than 700 academic instructors, admitted that he is facing severe pressure due to the political divide between Fatah and Hamas and the ongoing conflict between the two divisions of the Ministries of Education and Higher Education in the Gaza Strip and the West Bank. He stressed that universities are ready to start student elections and they even held a meeting last year to set a date, only to receive a decision from the outside that the time has not yet come for elections.

Abu Semaan of Al-Azhar emphasized the importance of a student body that represents all students. He also stressed the importance of the freedom to choose their own representatives in all domains. Abu Semaan added that there has been serious discussion inside the university to hold elections, but some fear that political pressure could influence the outcome.

However, it appears that monitoring academic freedoms at Palestinian universities has existed ever since their inception in the 1980s. According to a study by Asta, in one of the West Bank Universities the father of a female student filed a complaint against an Arabic literature teacher for discussing the famous novel "Season of Migration to the North" by Sudanese author Tayeb Salih, which contains sexual expressions. Moreover, academic Ghazi Fallah has resigned from his post due to pressure at the same university for describing the West Bank as "Judea and Samaria."