Despite the mutual threats and demonization, Meir Javedanfar writes that even so-called hard-line Israeli politicians, including Prime Minister Benjamin Netanyahu, would consider opportunities to open a channel with Iran. 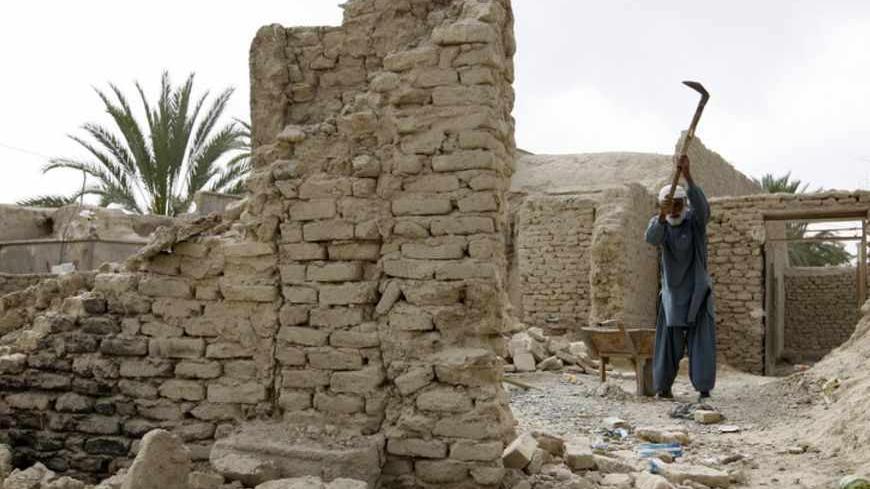 A man works at his house after an earthquake in Saravan, about 1,400 km (869 miles) southeast of Tehran, in this April 18, 2013 photo taken during government tour to affected areas. - REUTERS/Raheb Homavandi

On Tuesday, April 16, there was yet another earthquake in the Sistan and Baluchestan province of Iran. Neighboring Pakistan, this province is one of Iran's poorest and sparsely populated. Had an earthquake of the same magnitude (7.8 on the Richter scale) struck Tehran, hundreds of thousands if not more could have perished.

The last time there was a high-casualty earthquake in Iran was in late December 2003 in the city of Bam. It killed more than 30,000 people.

Although the Iranian regime said it was unwilling to receive help from Israel, according to an article by the Israeli newspaper Yediot Ahronot, three years afterwards in 2006, Tehran allowed Israeli experts to visit the earthquake damaged areas. Although the article does not give an exact date of the visit, it says that the Israeli specialists celebrated passover in Tehran. In 2006, Passover holidays took place on April 12. So the visit must have taken place around that date. According to the article, the three Israelis entered Iran on a special laissez-passer passport which did not disclose their nationality. This was probably done in order not to create a scene in the airport by those who did not need to know. Those who did were Ayatollah Khamenei and most probably the IRGC [Iranian Revolutionary Guards Corps].

Iran accepted Israel's help because prior to the revolution many of the bridges and roads were built by Israeli experts and companies. Additionally, the regime in Tehran was subject to increasing criticism at home because of lack of progress in the construction process. It seems that after the 2003 Bam earthquake, Iran wanted the experts to hand back the infrastructure plans so that they could be used in rebuilding. Their presence was also most probably used for consulting purposes.

But why did Ariel Sharon, Israel's Prime Minister at the time, make such an outreach? After all, Iran and Israel had been at loggerheads. One year before the Bam earthquake, Iran was accused of financing the deaths of hundreds of Israeli citizens through Hamas terrorist attacks in buses and in cafes in Israel's major cities. And only one year before, President Mahmoud Ahmadinejad had said that Israel should be eliminated, and then went on to become the first senior Iranian official to deny the holocaust.

Ariel Sharon's efforts could be related to some unfinished business which started in 1996, after the election of Netanyahu as prime minister and the appointment of Sharon as Israel's foreign minister.

The article Iran, Israel reportedly forging contacts by Steve Rodan, which was published in the Jerusalem Post on Sept. 9, 1997, provides some interesting insights. According to Rodan, after his election Netanyahu felt that “the policy of the previous governments of Yitzhak Rabin and Shimon Peres in leading an international campaign against Tehran was counterproductive.” According to the same article, to show good will “Netanyahu stopped attacking Iran and sent quiet signals that he preferred a dialogue.” The article goes on to say that Netanyahu also ordered the cessation of broadcasts by anti-regime movements which used Israel's Amos satellite to broadcast into Iran.

The period of rapprochement between the two sides reached new highs when according to an article in the Xinhua news agency entitled “Israeli firms doing business with Iran” published on Dec. 12, 1997, quoting Israeli radio the article states: “A group of 16 Israeli agriculture experts secretly visited Iran and met with its deputy agriculture minister.”

The point man who Netanyahu placed in charge of dealing with Iran was Ariel Sharon. His contacts with the Iranian government would have had to have been approved by Ayatollah Khamenei. Part of the success of this strategy was most probably related to the fact that Sharon had managed to establish contact with the supreme leader's representatives.

It seems that after the start of his second term, which started in March 2003, Ariel Sharon decided to try to reach out to Iran again. This culminated in the reported 2006 visit by Israeli experts to Iran. In the same year, negotiations between the two countries over Israel's debt to Iran started again, to end again due to inability to find an acceptable settlement.

The question which must be asked is: Why would Khamenei allow contacts with Israel?

The answer in this case is most probably related to resources. The regime in Iran is resource sensitive. Despite its anti-Israeli rhetoric, it bought weapons from Israel in the 80s because it was doing badly during the war against Iraq. Meanwhile in the '90s, soon after Khatami's election as president, Iran was reeling from the economic shocks of the low oil prices brought about by the Asian financial crisis, which brought oil prices to below $20 per barrel. It needed to recuperate its much- needed funds from Israel.

The need for resources also most probably applied to 2006. The regime badly needed to reconstruct earthquake-damaged areas. This would have been more important than its anti-Israel rhetoric.

Should Khamenei need to establish secret contacts with Israel for the sake of his regime, he is very likely to do so. Maslehat-e Nezam (regime interests) are of paramount importance. And Israel could very well accept. Despite the tough words, you will be hard pushed to find Israeli politicians who do not want to reestablish contact and cooperation with the Iranian government. After all, in 1996 Benjamin Netanyahu was one of them.