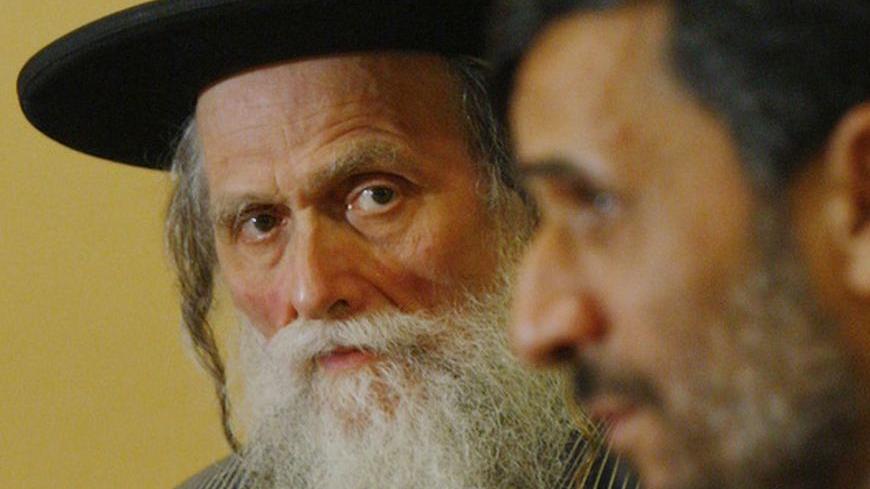 Breaking the usual practice of the Islamic Republic — which demonizes Zionists while purporting to respect the Jewish religion — Rahimi blamed the spread of drugs on the teachings of the Talmud, an important  text that brings together centuries of discussions in Jewish academies explaining Judaism’s oral laws.

Rahimi went on to say that the Talmud teaches how to destroy non-Jews and that 80% of America’s wealth is in the hands of 6% of the world’s Jewish population. He quoted an American researcher, who he did not name, to claim that a Jewish gynecologist sterilized 8,000 Native Americans, which Rahimi asserted was in accordance with the Talmud. He also blamed the Talmud for what he said are anti-Christian and anti-Muslim teachings and claimed that Jews see “others at their service.” Delving into the rich international grab-bag of anti-Semitic conspiracy theories, he blamed Jews for the Russian revolution — in which he asserted that “not a single Jew died” — trying to take over the world and fomenting differences between Shiite and Sunni Muslims.

Half way through the tirade, Rahimi seemed to become aware that he had gone too far and attempted a bit of damage control.  “We respect the followers of the Prophet Moses, but we are against global Zionism,” he said. He then blamed “Zionists” for the world drug trade and for opposing “manifestations of independence and freedom of the Islamic Republic of Iran.”

Rahimi’s attack was unprecedented because for the first time, a regime official openly attacked Jewish religious texts, as opposed to simply harping against Zionism. Despite a massive Jewish exodus after the 1979 revolution, Iran still has the largest population of Jews in the Middle East outside Israel — between 10,000 and 25,000 – and an appointed Jewish member of parliament.

Realizing the international outrage Rahimi’s outbursts would cause, the Iranian regime’s PR machine went into damage control mode. First the English language mouthpiece Press TV published a piece about the speech without a single direct reference to Rahimi’s use of the word 'Yahood,' which means Jews. Thus, where Rahimi said in Farsi that “Jews see others at their service,” Press TV changed that to “the Zionists regard themselves as the master race and they view the other races as their slaves.”

The regime then pulled off the original article from the Iran Student News Agency website where it was first reported in Iran. (The full text of the speech is still available on other websites, including Aftab News.)

The outburst is the culmination of a recent rise in the public use of anti-Semitic language in Iran. In Iranian press and politics, use of the term "Yahoodi Sefat" meaning “of Jewish character” is being heard more often as a character assassination tool.

One of the biggest victims has been President Mahmoud Ahamdinejad’s right hand man, Esfandiyar Rahim Mashaei. Mansoor Arzi, a well-known ultra-conservative preacher, first publicly started attacking Meshaei for being a Yahoodi Sefat. He then went on to call for the killing of “Meshaei the Jew.” More recently, when ultra- conservative Iranian parliamentarian Mehdi Koochak Zadeh was reported to have been involved in a scuffle with a reporter, he publicly accused the press of being engaged in “Jewish style propagation of lies.”

Anti-Semitism is not confined to ultra conservatives. Even US-educated reformist politician Ebrahim Yazdi — who served as deputy prime minister and minister of foreign affairs after the 1979 revolution and resigned to protest the takeover of the US embassy in Tehran — has joined the chorus. While serving in prison recently, the octogenarian (the world’s oldest political prisoner at the time) issued a public letter in which he asked, “how does a president of Jewish descent want to perform his duties? In contrast to Muslims of Zoroastrian decent, Muslims of Jewish descent do not have a good record.” Yazdi referred to dubious material published by Iran’s Ministry of Intelligence in which those who have fallen from the regime’s grace are now accused of having Jewish backgrounds.

In the past, especially during the presidency of Mohammad Khatami, senior Iranian politicians refrained from such crude anti-Semitism. Khatami, who served from 1997-2005, went out of his way to show respect for Judaism by visiting Tehran’s Yusef Abad synagogue. Criticism was reserved for the Israeli government, not Jews. However, when hard-line security officials sought to discredit Khatami, they concocted charges of spying for Israel against a dozen Iranian Jews.

The new trend appears to date to Ahmadinejad’s public denial of the Holocaust in a speech on Dec. 14, 2005. On that day, Ahmadinejad became the most senior politician in Iranian post-revolutionary history to adopt this narrative. More significantly, Supreme Leader Ayatollah Ali Khamenei did not stop Ahmadinejad. The president’s frequent Holocaust denial appears to have legitimized the shift from public attacks against Israel to attacks against Jews and Judaism.

The trend has been exacerbated by the declining quality of regime officials. As a result of the thwarted Green uprising following fraud-tainted 2009 presidential elections, more experienced and moderate politicians have been sacked, jailed, left the country or are simply lying low.

The brain drain which has hit the top ranks of politicians and advisers has meant that the education and world view of many politicians in Iran now is far more limited than before. This could be a major reason behind why Rahimi had no qualms about making such remarks.

There is another simple, yet depressing explanation. It is perhaps unrealistic to expect a so-called Islamic regime which, more than ever, is de-legitimizing the holy religion of Islam by killing, torturing and stealing in its name to promote politicians who respect other holy religions.