Iranian President Hassan Rouhani looks to put behind the charges of Holocaust denial by his predecessor, Mahmoud Ahmadinejad. 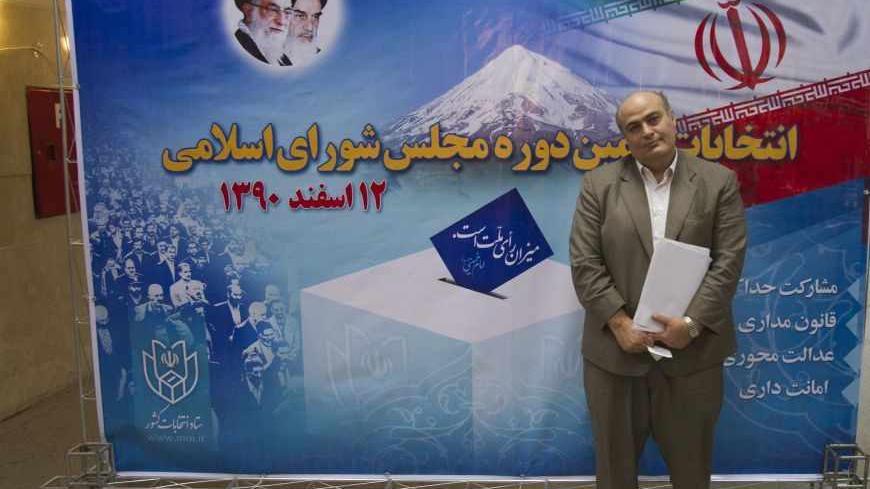 Iranian-Jewish member of parliament Siamak Moreh Sedgh stands in front of a banner for the 2012 parliamentary elections, after he registered as a candidate at the Interior Ministry building in Tehran, Dec. 25, 2011. He reportedly is going to the United Nations along with Iranian President Hassan Rouhani. - REUTERS/Morteza Nikoubazl

In Iran, much like everywhere else, all politics is local.

This applies to some of the most important reasons behind Rouhani's reported decision to take Iran's Jewish member of parliament, Siamak Moreh Sedgh, with him on his upcoming UN trip to New York.

Contradicting Ahmadinejad's statements, including his remarks regarding the Holocaust, seems to have become an important tool in the arsenal of the Rouhani administration against the hard-liners.

When Foreign Minister Javad Zarif stated publicly on Twitter on Sept. 6 that Iran has never denied the Holocaust, Rouhani and his allies were trying to tell Ahmadinejad and the hard-liners: Your era is over. We are now in charge of how Iran is viewed abroad. Ahmadinejad's Holocaust denial made Iran look like an anti-Semitic country and we are going to put a stop to that.

Judging by their reaction, it seems that the hard-liners in Iran heard that message, and decided that they were not going to take it lying down.

Two days after Zarif's tweet, in an editorial published Sept. 8, Hossein Shariatmadari, the editor of the hard-line Keyhan newspaper, publicly condemned him. Shariatmadari, whose newspaper is reported to be close to Supreme Leader Ayatollah Ali Khamenei, called Zarif's statement regarding the “Zionist-made Holocaust myth” insulting to former President Ahmadinejad. Among other things, in his editorial Shariatmadari also called on Zarif to “correct his views” since he had stated at his parliamentary hearing that he is loyal to the teachings of Imam (Khomeini) and the supreme leader of the revolution (Khamenei).

Two days later, on Sept. 10, another conservative, Mohammad Ali Ramin —  the deputy head of the Ministry of Islamic Guidance during the Ahmadinejad government — joined the public condemnation of Zarif’s remarks about the Holocaust. Calling Zarif's tweet a mistake, he demanded that Zarif issue an apology. Another notable reason which Ramin gave for condemning Zarif's message regarding the Holocaust is that it “denied the doubts of the supreme leader about the Holocaust.”

It is no secret that soon after Ahmadinejad's denial of the Holocaust in 2005, the Iranian-Jewish community publicly condemned him for it.

By taking Iran's Jewish MP to the UN, Rouhani wants to tell the international community that the Iranian government is not anti-Semitic and that Iran respects Jews. And he is counting on the support of Iran’s Jewish MP to achieve this goal.

More importantly, with this action Rouhani will want to undermine efforts by his conservative rivals who want to keep Iran isolated from the West with their Holocaust denial.

However, domestically, the odds are stacked against Rouhani and this is one area where Iran’s Jewish MP will not be able to help him.

When it comes to Holocaust denial, Rouhani's rivals have a strong backer: Khamenei. As far back as 2002, three years before Ahmadinejad's first public denial of the Holocaust, Iran's supreme leader himself publicly denied the Holocaust. He did not stop there, and went on to question the Holocaust on at least five other occasions. It is little wonder that both Shariatmadari and Ramin referred to the supreme leader in their condemnation of Zarif's Holocaust comments.

Therefore Rouhani will have to watch his step. Although taking Iran's Jewish MP to the UN may somewhat improve Iran's image abroad, at home where it most matters, it is unlikely to help him much. In fact, Rouhani may soon find that going against Khamenei's denial of the Holocaust may be too costly.

In fact, this could be the reason why in his recent interview with Anne Curry, Rouhani changed course. Instead of stating that Iran does not deny the Holocaust as Zarif previously had done, he sidestepped the question by stating that he is not a historian.

Abroad, this is likely to expose Rouhani to much criticism. After eight years of Holocaust denial by the Ahmadinejad administration, the West is looking for the government of Rouhani to put an end to Holocaust denial in the most clear and persistent manner. Sidestepping this issue as Rouhani has recently done will not bring relief for his government abroad. Instead it is likely to mean more questions and more accusations.

This is why he will have his work cut out for him. The supreme leader's supporters such as Shariatmadari see the narrative of the denial of the Holocaust as the “Achilles Heel of the Zionists.” It is a weapon which they believe hurts Israel because it undermines the justification for its existence. Rouhani’s biggest battle will be at home, in convincing the supreme leader to change course on the regime’s Holocaust narrative. All politics is local and the local battles are usually the most difficult to fight. Rouhani’s supporters should hope that he wins, otherwise his efforts to promote his administration’s image abroad will limp.