Assassination Will Not Weaken Iran’s Support for Assad

Meir Javedanfar speculates that the assassination of a senior member of the Army of the Guardians of the Islamic Revolution (IRGC) will not sink Iran’s support for Syrian President Bashar al-Assad. 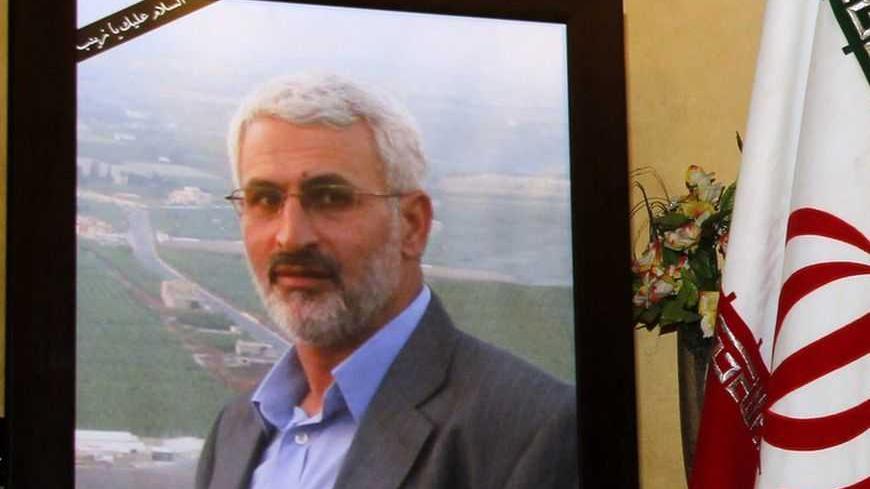 A picture of Hassan Shateri, aka Hesam Khoshnevis, is displayed in the condolences hall at the Iranian Embassy at Beirut, Feb. 14, 2013. - REUTERS/Sharif Karim

Up until yesterday, all that we knew about the recently assassinated Iranian Gen. Hassan Shateri was that before his death he was involved in reconstruction efforts in southern Lebanon.

However today at his burial ceremony in Tehran’s Shahid Mahalati neighbourhood, another part of his life came to light.

“We are near the days of martyrdom of Imad Mughniya. Our Shateri was no less than Mughniya. He had a special place, in the way that he will be missed and his purity. That's all that can be said as his secret contributions cannot be mentioned," stated Hojatoleslam Panahiyan, who had met Shateri in Lebanon’s Embassy a number of years ago.

What could have been his secret contributions which Hojatoleslam Panahiyan hinted at?

At this point there is no solid proof. All that we have are hints and assumptions. However it is not difficult to assume that someone who was a member of Iran's Islamic Revolutionary Guards Corp (IRGC) and was involved in reconstruction efforts in southern Lebanon had close contacts with Hezbollah. After all, Hezbollah would not just allow any foreign official to roam areas under its control, areas as sensitive as the Lebanese border with Israel where Shateri was proud of paving its roads with asphalt. As a IRGC officer who had fought in the war against Iraq, he had the military experience to deal with Hezbollah’s military officials. According to other reports from Iran, he had taken part in reconstruction projects in Afghanistan as well.

The fact that his death was confirmed by the commander of Iran’s IRGC Quds force, Quasem Soleymani, strengthens the argument that in fact he could have been a member of Iran’s Quds force. Quasem Soleymani does not confirm the death of any ordinary IRGC person. This is in addition to the fact that there have already been confirmed statements by Quds force officials that they operate in Syria, although they did not have a “military presence.”

According to at least one news website in Iran, as well as the Lebanese newspaper As-Safir, before he was killed Shateri (who was also known by his alias as Hesam Khoshnevis) had been in Aleppo. The given reason for his visit was “to implement reconstruction and development projects in that city.” According to Iranian state media outlet IRNA, he was killed on his way to the airport in Damascus.

Aleppo these days is the scene of some intense fighting. Its airport has stopped all flights. According to AP, “Rebels have been attacking the civilian airport in the city of Aleppo for weeks, and now appear to have overrun the main defenses around the facility.”

It's very difficult to believe that Shateri was there “to implement reconstruction and development projects” as the Iranian government claims. These days in Aleppo, development of the city is not on Syrian President Bashar al-Assad’s agenda. Defeating the rebels from around the city is.

What Shateri was most probably doing was acting as a liaison between the IRGC Quds force and Assad’s forces who are battling the Syrian opposition forces. His involvement in “reconstruction projects” was most probably just a cover.

Today at Shateri’s burial ceremony in the IRGC-populated Shahid Mahalti neighborhood, Hojatoleslam Panahiyan described him as someone “no less than Imad Mughniya.” If Panahiyan is right and that Shateri had the same level as the legendary Mughniya, then his death could be considered as a major blow to the IRGC Quds force and to its allies in Syria and Lebanon.

However, his death is unlikely to lead to an end or even a scaling-back of Quds force operations in Syria or Lebanon. This is especially true about the former, as Ayatollah Khamenei and his supporters seem adamant that support for Assad must continue.

It must be noted that this is not the unanimous view of the Islamic republic. There are those, especially former diplomats who believe that continued support for Assad could eventually hurt regime interests. However such voices are trumped by that of the more power IRGC, which is far closer to the supreme leader. Even the more pragmatic Ayatollah Rafsanjani is worried about the fall of Assad, as he believes it could impact Iran’s influence in Lebanon and Shiite-ruled Iraq. And he would be right.

The weakening of Assad in Syria has emboldened Iran’s Sunni adversaries in the region, and some believe that the recent challenges being posed to Iran’s Iraqi Shiite ally Nouri Al-Maliki by Sunnis is related to what's been happening in Syria. Meanwhile, loss of Syria could mean the loss of a strategic link to Hezbollah.

However, what is far more important to Ayatollah Khamenei and his IRGC allies is what will happen in Iran. The fall of Assad could set an example for the people of Iran. Furthermore, if Iran loses Syria to its Saudi rivals, tomorrow they could start fermenting problems within Iran, including among its own Arab population. In fact, the Iranian government is so worried that it has recently started arresting and sentencing a number of Ahvazi activists to death on trumped-up charges. The fact that a conference was held in Cairo supporting Iran’s Arab separatists when foreign minister Salehi was visiting Egypt most probably added to such suspicion.

The Iranian regime is not going to sink with Assad. The moment it realizes that the game is over it will stop supporting him and most probably will cut a deal with the opposition. However, for now it still seems to believe that Assad has a fighting chance, and as long as the the fighting is in Syria, Iran can withhold its enemies there, instead on its own territory. This is why despite Shateri’s assassination, Ayatollah Khamenei’s support for Assad will continue unabated.