Khamenei's Criteria For Next Iranian President 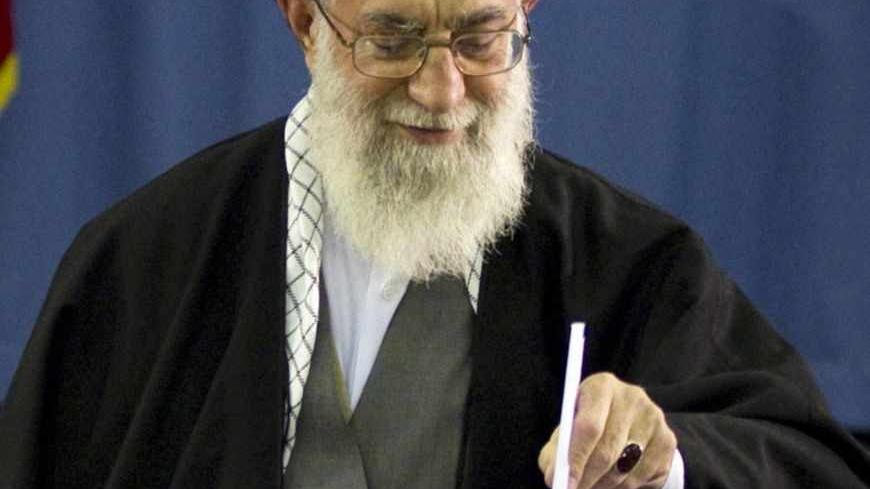 At a recent gathering on March 24 in his city of birth Mashhad, Iran’s Supreme Leader Ayatollah Ali Khamenei emphasized the characteristics of the next president as: “having the strengths which exist today, minus the weaknesses.” In other words, someone who has Ahmadinejad's strengths but not his weaknesses.

At the same gathering, Khamenei also emphasized that he will only have one vote and that no one will know his vote before he casts it. It's difficult to believe that this will be true. In fact, the upcoming presidential elections are likely to decided by Khamenei, in consultation with the IRGC. Their opinion is likely to carry the second highest weight after his. Between them, Khamenei is likely to be the only party that has the last word and veto power.

Such a strategy has much logic. Iran is at a very sensitive juncture. After Khamenei's appointment as supreme leader in 1989, every president who has come to power has fallen out with him at one point or another. This includes Ahmadinejad, whom Khamenei publicly and privately backed more than any president who served under him because he believed that he was a loyal soldier. However, Ahmadinejad proved him wrong. Not only did Ahmadinejad create much infighting within the regime, in May 2011 he even went as far as publicly challenging the decision of the supreme leader. This is a scenario which Khamenei would not want repeated — ever again.

Taking into consideration his numerous difficulties with Ahmadinejad and the challenges that lie ahead such as sanctions, isolation and a worsening economy, in all likelihood, Ayatollah Khamenei's criteria for choosing the next president is likely to be the following (in descending order):

Looking at the aforementioned criteria, it makes it extremely unlikely that people with whom Khamenei has had problems with will be chosen. This means that reformists, especially Khatami, moderates such as Rafsanjani (if he decides to run) as well Ahmadinejad's right hand man, Esfandiyar Meshai, whom Ahmadinejad has been grooming, have very little chance of being selected by Khamenei.

In terms of whom Khamenei will choose, it's difficult to say at the moment. A lot can happen in two months.

In my opinion, for now, the candidates who have the highest chance are first and foremost former parliamentarian speaker Gholam Ali Hadad Adel who is related to Ayatollah Khamenei (his daughter is married to Khamenei's second son and possible successor Mojtaba). Not only is he family, but also throughout his term as speaker he never has challenged Khamenei's decisions. In fact, he has never challenged Khamenei, not before or after this position. He seems to be the ideal candidate.

Former foreign minister and Khamenei foreign policy adviser Velayati has the second highest chance. He is also close to Khamenei and is a loyalist. His lack of experience in domestic politics is, in my opinion, his biggest disadvantage compared to Hadad Adel.

While Ayatollah Khamenei busies himself with choosing the next president, he will also have his mind elsewhere: with Ahmadinejad. Or, more precisely, how much damage will he cause to his regime, especially if his candidate and relative Meshai is not allowed to run in the elections? Or even if he is allowed to run, he does not win. This is a very important and a valid concern. It's also another reason why, when it comes to choosing Iran's next president this time, unlike 2009, Khamenei will have to get it right.