The Myth of the Missed Opportunity In Israeli-Arab Peace

Akiva Eldar examines the question of whether every diplomatic process that does not result in an agreement between the Arabs and Israelis should be considered a “missed opportunity.” 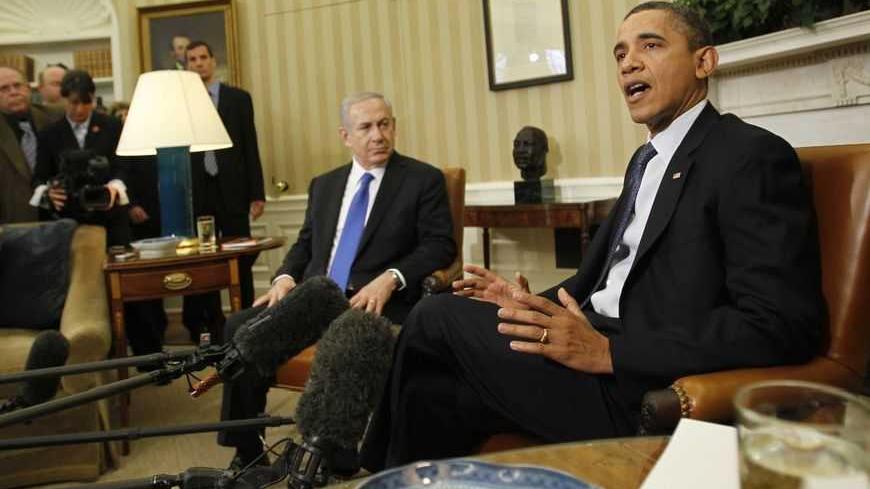 President Barack Obama speaks to the media alongside Israeli Prime Minister Benjamin Netanyahu during their meeting in the Oval Office of the White House, March 5, 2012. - REUTERS/Jason Reed

The month of March holds out the promise of abundant political opportunities. Prime Minister Benjamin Netanyahu is expected, in all likelihood, to form his third government; President Barack Obama is coming on his first visit as a sitting president to Israel, the West Bank and Jordan, and immediately after that the summit meeting of the Arab League is convening in Doha. As it does every year, the summit will likely ratify the Arab Peace Initiative born in Beirut more than 10 years ago.

Absent noisy surprises, Obama’s visit will be crowned “another missed opportunity”. But already now, before the guidelines of the new government have been finalized, and before we know what the American president is carrying in his bags other than a note to be stuck in the Wailing Wall and a wreath to be laid at [the Holocaust memorial] Yad Vashem, it appears one can take an additional step forward and determine that this time, too, the expected lamentation over “the opportunity that was missed” is baseless. Simply, because to begin with, there was no opportunity; therefore, it wasn’t missed.

What kind of diplomatic initiative is worthy of the title “opportunity”? Should every diplomatic move that does not result in agreement between the sides be considered “a missed opportunity”?

In a research study soon to be published in a thick volume, Professor Elie Podeh of the Department of Islam and Middle Eastern Studies at the Hebrew University, addresses these issues. The senior scholar of the Levant contends that historians tend to use the term “missed opportunity” in the context of diplomatic contacts between Israel, the Arab states and the Palestinians, despite the fact that to begin with there was no real chance of their success.

In order to base his claim, Podeh examined 30 diplomatic initiatives, from the agreement between Chaim Weizmann (Israel’s first president) and the Emir Faisal in 1919, which was designed to define the relationship between the Zionist movement and the United Arab Kingdom (which was stillborn), and up to the talks between Prime Minister Ehud Olmert and Palestinian President Mahmoud Abbas (Abu Mazen), which were stopped in 2008 without an agreement. Betwixt and between, Podeh reports on the feelers put out by Col. Hosni al-Zaim, who led Syria for several months in 1949 and proposed to Prime Minister Ben-Gurion that they meet to discuss a peace agreement. Podeh thinks the agreement would not have lasted any longer than did al-Zaim’s brief rule. Neither the call by Tunisian President Habib Bourgiba in March 1965 for Arab recognition of Israel and for the continued handling of Israel through diplomatic means, nor the autonomy initiative which Israeli prime minister [Yitzhak] Shamir tried to advance in 1989, are regarded by Podeh as missed opportunities.

According to Podeh, the definition of “missed opportunity” and the extent to which it was missed should be examined in keeping with four parameters: the leaders’ legitimization from their public; their determination to pursue peace; the extent of confidence that exists between the sides and the involvement of a third party. In an interview with al-Monitor, Podeh says that of the 30 cases he examined, 20 did not have the requisite conditions which allow for their failure to be considered a “missed opportunity”. Surprisingly, one of them is the London Agreement (reached in 1987 in secret negotiations between then-foreign minister Shimon Peres and King Hussein).

Why the surprise? Because the London Agreement is always mentioned as a distinct example of an historic failure to resolve the Israeli-Palestinian conflict, even before the first intifada broke out in 1987. On the other hand, Podeh contends that nothing was missed for the simple reason that there was no real opportunity: he reminds us that Peres did not have any legitimization to reach agreement over the territories, Prime Minister Yitzhak Shamir had no motivation to sign it and the Americans were unwilling to become seriously involved. In other words, three of the four conditions that define an opportunity were missing. “Not every failure to reach agreement is a missed opportunity”, Podeh explains. “In order to point at a missed opportunity, one must make sure that the sides were truly interested”.

According to Podeh’s parameters, a dozen initiatives stemming from an external element, without the willingness of the sides involved, could not have enforced any progress. On the other hand, two cases that went well — the peace agreements with Egypt and Jordan — ripened when the sides themselves asked to stop the conflict between them and an external element (the United States) contributed its share. In his view, the Oslo accord was, in fact a missed opportunity, due to Prime Minister Yitzhak Rabin’s assassination. In this case, too, as in the Egyptian and Jordanian channel, two important conditions were met: the sides reacted to significant changes taking part in the region and there was an alternative which they surmised was better for them than the current state of affairs.

At the same time, Podeh points to three opportunities missed by the Palestinians, starting with the 1947 Partition Plan, the rejection of “President Clinton’s parameters” in December 2000 (as opposed to the failure of the Camp David talks with then-prime minister Ehud Barak in July of the same year which did not meet the criteria of a “true opportunity”). The third missed opportunity — Abu Mazen’s talks with Olmert in 2008 — is graded by Podeh as a “medium” [missed opportunity], because the talks began to ripen but at the same time Olmert began to lose his legitimization.

Podeh points at an abundance of missed opportunities on Israel’s part in almost 100 years of conflict reviewed in the study — but not one single peace initiative. Among others, he mentions the invitation of Mossad chief Meir Amit in 1966 by the President Nasser administration to a meeting in Cairo with a senior Egyptian intelligence figure in an effort to advance an Egyptian peace initiative. The move was torpedoed by his predecessor and then-advisor to the prime minister on intelligence issues, Isser Harel, who convinced Prime Minister Levi Eshkol that the Egyptians were setting a trap.

Between 1971 and 1973 Prime Minister Golda Meir rejected the peace signals of [Egyptian President Anwar] Sadat and ignored his proposal to establish full peace with Israel in return for a return of the Sinai [Peninsula] to Egypt’s hands. Podeh also counts the missed opportunity given to Prime Minister Barak in the year 2000 to reach a peace agreement with Syrian President Hafez al-Assad. On the other hand, Podeh blames various elements for the failure of contacts conducted by Yitzhak Rabin with the Syrian president, among them the Americans who rushed to reveal to Assad the existence of a promise [a complete withdrawal from the Golan] with which the prime minister had secretly entrusted them.

“The mother of all missed Israeli opportunities,” in Podeh’s view, is the Olmert government’s failure to pursue the Arab Peace Initiative. Podeh put together a detailed report at the time that analyzed the Arab initiative (Israeli withdrawal from the territories it captured in 1967, the establishment of a Palestinian state and a just and mutually agreed upon solution to the refugee problem based on U.N. General Assembly Resolution 194 — and in return, recognition by the Arab states of Israel and a declaration of normalization of ties). He points to the fact that the initiative is still awaiting an Israeli partner and that it receives annual ratification [by the Arab League], but as former Jordanian Foreign Minister Marwan Muasher told Al-Monitor: “The initiative cannot be on the table forever.” In the same interview, Muasher warned Israel against the serious regional implications of the diplomatic freeze and recommended, in fact, that the American president refrain from a move that Podeh terms in his study “not an opportunity, that wasn’t missed.”

“The book was written in the perhaps naïve hope that leaders would read it and learn from history,” Podeh admits at the end of our conversation.

"Decision-makers can, perhaps, learn from it how not to miss opportunities in the future and especially how to take advantage of opportunities that present themselves so that when the next opportunity pops up, we don’t miss this one, as well. I’m not sure this is what will happen,” he adds with a sad smile.