Erdogan Angered After Opposition In Turkey Meets With Assad 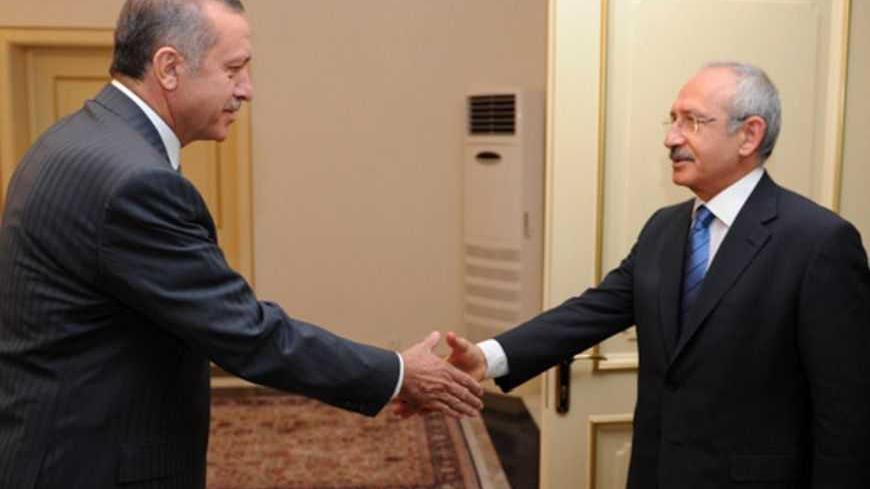 The visit of four parliamentarians of the main opposition Republican People’s Party [CHP] to Damascus on Thursday and their meeting with Syrian President Bashar Assad has once again exposed an important weakness of the ruling Justice and Development Party [AKP] government.

As I wrote previously, the Turkish public doesn’t strongly support Ankara’s goal of toppling Bashar Assad and the Baath regime and replacing them with a new rule dominated by the Muslim Brotherhood. But this capacity gap Ankara is facing in its Syria policy is not confined only to lack of adequate public approval and support. More crucial is the antagonism and polarization caused in segments of the society and national politics by the Syria policy.

The visit of the CHP delegation to Damascus and their meeting with Assad is an outcome  of this antagonism.

The AKP rule couldn’t transform its policy for regime change in Syria to a “national cause” by persuading the majority of the public. It simply could not goad the public to get excited by its policy. If they had been successful, the CHP delegation could not have gone to Damascus. They would have been worried about public reaction to such a visit.

That AKP couldn’t fully convince its own constituency of the justness and validity of its Syria policy is a fact. But roots of the polarization between the main opposition and the ruling party on Syria case go deeper.

Their antagonism arises from the Alevi-Sunni polarization in Turkey. Although the Alevi minority in Turkey diverges from Arab Alewites in their beliefs and rituals and have indigenous features peculiar to Anatolia, they don’t regard the Syrian regime with sentiments of confrontation and hostility as does the Sunni mainstream Islamic current that prevails in Turkey.

Turkish Alevis are majority secularists. When you add their fears of Sunni Islamism, it is inevitable that they feel an affinity to the secularist regime in Syria.

And, also to be noted is that the Turkish Alevis heavily vote for the secularist CHP.

The same goes for Arab Alewites of Hatay and Mersin regions who had elected three of the parliamentarians that were in the delegation that visited Assad. The sympathy for the Assad regime openly voiced in these two provinces is a cause of distress for the ruling party circles.

You have to look at the photos printed in Friday’s Turkish papers showing Safak Pavey, the deputy chairman of the CHP and member of Parliament from Istanbul, and the three other parliamentarians, Aytug Akici [Mersin], Hasan Akgol [Hatay] and Mevlut Dudu [Hatay], in the light of these facts.

According to reports in the Turkish press, the CHP delegation asked Assad for the release of journalists — American Austin Tice and Palestinian Bashar Khaddumi —known to be detained by the regime. Four months ago, a CHP delegation that also included Mevlut Dudu and Hasan Akgol went to Syria and took delivery of Turkish cameraman Cuneyt Unal who had been in a regime prison for more than three months.

The ‘’humanitarian mission’’ label affixed to this meeting must not have convinced Prime Minister Recep Tayyip Erdogan. His harsh reaction was headlined by mainstream daily Haberturk: “Why Did You Send Them to That Brute?”

The "brute" that the prime minister was referring to is Syrian President Bashar Assad.

It was the CHP chairman, Kemal Kilicdaroglu, that Erdogan was taking to task with the question that he asked at an Ankara press conference: “Why did the main opposition of this country send its parliamentarian to that brute? What did they achieve there?”

It is possible to understand the anger of the prime minister. At issue is the political support by Turkey’s main opposition party to a regime and its leader that has been demonized by the prime minister of Turkey and his government. “Humanitarian mission” pretext is not convincing to the government.

It was hardly surprising that Bashar Assad in a statement issued in Damascus saluted the CHP delegation and the Turkish opposition. The statement said Assad told the CHP delegation: “Syria has to distinguish between the attitudes of the Turkish people, who support stability in Syria, and the Erdogan government that supports terrorism, extremism and destabilization in the region.”

The statement also said that the delegation led by parliamentarian Hassan Akgul conveyed the “Turkish people’s rejection of interference in internal affairs of Syria and their wish for good relations with their southern neighbor." The Damascus meeting thus provided a vehicle to transmit Assad’s views explained to the CHP delegation to the Turkish public as well.

According to a news report by Utku Cakirozer, the Ankara representative of daily Cumhuriyet, when asked in the meeting, “Is a regime without Assad feasible?,” Assad replied:

‘"I can’t leave even if I wanted to. I will not abandon ship until we get to a calm port in this storm. My people are behind me. If the storm ends one day, if there are elections, democracy comes and people tell to me leave, then I will. I mean I will go if I have to, but my people have to tell me that.’’

It was possible to understand from these words that Assad has no intention of leaving Damascus until the 2014 elections. Assad’s remarks about Erdogan constituted a challenge:

‘’The Syrian crisis has become an existential struggle for Erdogan and Emir of Qatar. If Syria wins, they will lose in their country. There is also an ideological dimension of this affair. They want to see political Islam dominate Syria. We want t preserve secularism.’’

Assad reportedly said, “Turkey has the most influence on the situation in my country. Most weapons and terrorists come via Turkey. Twenty-five percent of our land border with Turkey is under the control of the PKK, and 75 % of it is under Al Qaeda.”

Assad also appealed to the Turkish nationalist public by saying: “There is an increased opportunity for the Kurds to set up a state in the region. Kurds in Northern Syria have linked with Iraqi Kurds. It is a matter of time for a Kurdish state.”

It appears that the visit of the CHP delegation to Damascus has become a serious headache for AKP’s Syria policy.

Kadri Gürsel is a contributing writer for Al-Monitor's Turkey Pulse and has written a column for the Turkish daily Milliyet since 2007. He was also a correspondent for Agence France-Presse between 1993 and 1997, and in 1995 was kidnapped by the PKK, an experience recounted in his book Dağdakiler(Those of the Mountains), published in 1996.