Just as fascinating as the messages Obama conveyed at the Israeli Convention Center in Jerusalem was the way they were received by the young audience, writes Mazal Mualem. 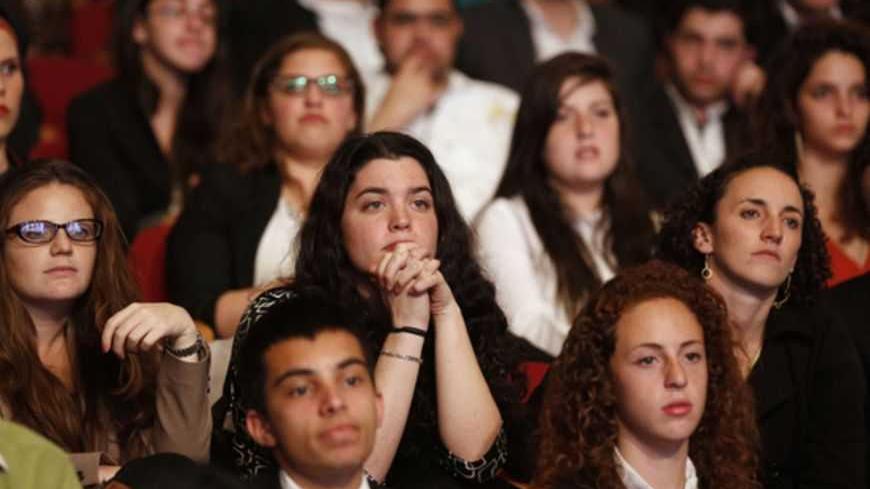 The power of the address delivered by US President Barack Obama [March 21] lay not only in the carefully chosen words that struck the right chord with the Israeli-Jewish experience in all its poignancy, fears, victories and hopes. But it was perhaps best expressed in the outburst of warmth that the young audience exuded toward the podium in reaction to the president’s address, even when he touched on the suffering of the Palestinians and their “just” aspiration for statehood.

What happened in the audience was as fascinating as the speech itself. Although it was clear that a favorable young audience had been selected a priori, those in attendance could feel that there was much more than just a sense of endearment and respect for the president. As planned, Obama was able to address the Israeli public directly, skillfully turning from an almost hostile figure into a true, caring and embracing friend.

The frequent applause was an emotional expression of sympathy and warmth by thousands of young people who, only two days earlier, had not counted Obama amongst Israel’s friends. And yet almost instantly they were riveted and in love.

Even the knowledge that this was a well-orchestrated event that left no room for surprises did not dampen the feeling of authentic warmth carried from the president to the audience and back to him. This is the kind of energy that’s hard to fake. It was utterly spontaneous and sweeping. It could be felt from the moment Obama set foot on the decorated stage and as he stood tall facing the audience, artfully caressing it with his words and offering himself to them. And they willingly surrendered.

Obama’s greatest achievement is that he was able to bring back the diplomatic negotiations with the Palestinians to the forefront after four years of stalemate and lack of interest on the part of Israelis. Moreover, he was able, as he had wanted, to “talk to the Israelis” over the head of Prime Minister Benjamin Netanyahu, giving the Israeli-Palestinian conflict priority over the Iranian threat, which in the past four years the Israeli prime minister turned into a be all and end all.

However trite it may sound, this cannot be skirted: The Israeli public needed the attention and hug from the leader of the free world in order to know that his commitment to its security is as unwavering as that of his predecessors, if not more so.

One loving address did what no Iron Dome defense system battery could do for Israelis during Operation Pillar of Defense. And that’s the reason why it was hard yesterday to let go of the feeling that four years had gone to waste; years of animosity and suspicions between Israelis and the man in the White House.

In no time the president was able to foster an intimate relationship with the Israelis. This is somewhat reminiscent of the famous closeness between us Israelis and former President Bill Clinton. Obama’s three words in Hebrew, “Atem lo levad” (You’re not alone), conjured up the collective memory of the words Bill Clinton chose to bid farewell to the late Prime Minister Yitzhak Rabin, “Shalom, haver” (Goodbye, friend), which were etched into the Israeli ethos.

Almost 20 years separate the assassination of Rabin in November 1995 and Obama’s “Address to the Young” this week. They had been difficult years of sobering up, a second intifada, the disengagement from Gaza and Qassam rocket terror against towns in the south of Israel. They were years in which the Israeli public and its leaders had given up on the hope for peace with the Palestinians, so much so that in the recent election campaign, the Labor Party — Rabin’s party — hid the diplomatic flag from sight. It was simply because politicians assumed that peace “no longer sells.”

It is on this continuum of the annals of the conflict that Obama’s “Jerusalem speech” is an important milestone. It has made the diplomatic process relevant again, creating, at least on the Israeli side, the right atmosphere for its resumption, not out of euphoria but out of the understanding that burying our head in the sand cannot last forever.