If in the past Israelis resented a PM pummeling the US president, nowadays they are indifferent to these words and leave it to Prime Minister Netanyahu to sink the ship, writes Ben Caspit. 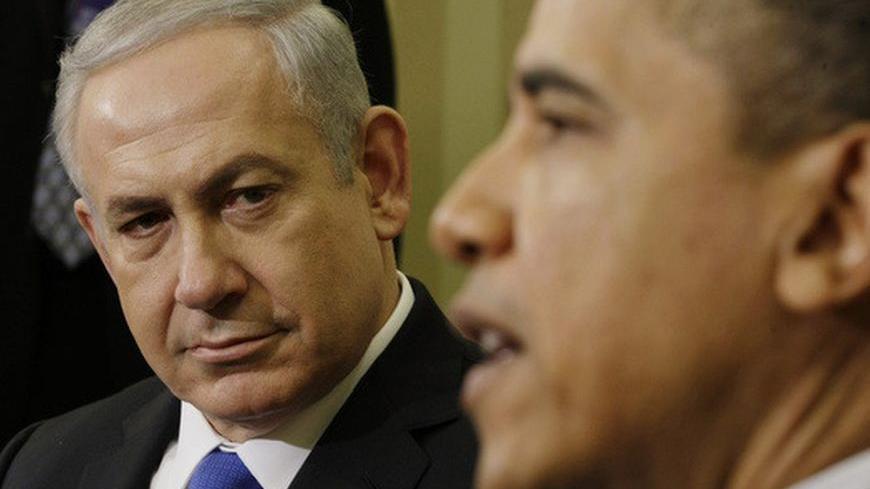 US President Barack Obama meets with Israel's Prime Minister Benjamin Netanyahu in the Oval Office of the White House in Washington. - REUTERS/Jason Reed

Almost four years ago, Benjamin Netanyahu made his first visit to Washington as the newly-elected prime minister. It was his second term in office. His first term ended badly, leaving him detested by the Israeli public, shunned from politics and an outcast in the American capital. The headlines in Israel that accompanied his trip proclaimed that Netanyahu was facing a direct threat from the American administration. “Bushehr or Yitzhar,” screamed one such headline, referencing the option of support against the Iranian nuclear program or keeping a settlement in the heart of the West Bank. Political pundits with White House connections gave a stunning description of how Chief of Staff Rahm Emanuel and his colleagues in President Obama’s inner circle were plotting to “school” Netanyahu and bring him to his knees. Want help against Iran? Sure, just evacuate settlements, freeze construction and get on board the peace process. “The party is over,” said the Americans. If Netanyahu wants the same attitude from us that Israel has grown accustomed to receive for at least a generation, he will have to work up a sweat.

Sitting aboard his flight to Washington, Netanyahu seemed pensive and worried. “What do they want?” he asked privately. “To bring me down?” No one knew what to tell him.  By the time Bibi arrived in the American capital, he was scared and apprehensive. The fallout from that first meeting with President Barack Obama was harsh. There was no chemistry worth mentioning. There was, however, mutual distrust and quite a bit of tension. It looked like the beginning of a beautiful rivalry. Then came a freeze on construction in the territories. And then it all fell apart. The Americans made every imaginable error. They perched Abu Mazen too high up the tree, took away the ladder and left.

There was a time when every Israeli prime minister knew that in order for them to keep their job, they first needed to earn Washington’s support. The Israeli public considered the strategic relationship with the US to be a vital asset of the highest magnitude, much more important than the futility of this place, than the outposts and the settlers. Failure to bring Washington on board was a sure sign that they would not remain in power. Period. In 1991 it was President George Bush the Elder who denied these guarantees to then-Prime Minister Yitzhak Shamir and showed him the door. In 1992 Shamir lost the elections to Yitzhak Rabin. In 1999 it was President Bill Clinton who gave Netanyahu — the very same Netanyahu — the cold shoulder, and this led to his defeat by Ehud Barak in the next elections. Israelis learned to recognize the value of America, and they learned to appreciate it. Anyone who posed a threat to this relationship was putting himself at risk.

And today? The situation has been turned completely upside down. Israel is well in the midst of an election campaign. It is a very sensitive period. In times like these, the ruling prime minister is generally accustomed to heaping flattery and praises on the American administration. He tries to arrange a highly publicized trip to Washington, and he boasts of the special relationship he has forged with the sitting President. Not this time.  Netanyahu and Avigdor Liberman are doing the exact opposite. Instead, they launch a provocative statement about construction in Jerusalem or the territories — whichever comes first — just about every week. Obama has become the punching bag of the “Likud-Beiteinu” party, and the mob cheers on. Meanwhile, the Israeli public is indifferent and shows no signs of concern.  Bibi can continue pummeling the Americans as far as we’re concerned, as long as the ship keeps sailing forward and the band plays happily on deck.

And Netanyahu is doing the pummeling. He is no longer afraid. He has lost the inherent, natural respect that every Israeli leader has had for the country’s greatest ally. It’s more important for him to plug the leakage of parliamentary seats to Naftali Bennett on the right. The most important thing of all to him is that those seats don’t trickle away. And Washington? We don’t care about them right now. Besides, in our last term in office, we taught our friends in the White House a lesson that they won’t soon forget, didn’t we? The timid, nondescript, and intensely uneasy Netanyahu of his previous term has long disappeared. He has since boosted his confidence and spread his wings, so that he can now hover high above on the fumes of euphoria. What will he do if they evaporate? Après lui le deluge.

What has changed? A few things. First of all, there’s the collapse of the peace process, the eruption of the Arab Spring, and the sense that a storm is brewing all around. There is no one and nothing to talk about, so all that is left is to trust in ourselves, or in our Father Who Art in Heaven. Then there are Obama’s mistakes: his visit to Cairo, his inclination to ignore Netanyahu and the Israeli public. Unlike Clinton or Bush the Younger, Obama hasn’t learned to build a relationship of trust with the Israeli public, and that Israeli public is starved for affection. A president who looks them squarely in the eye when he speaks, who pours his heart out to them, who drops by for a visit… now that’s a winning president. Israel doesn’t see Obama as a true friend, even though he provides the goods that Israel needs most, and he does it even more than most of his predecessors. Nevertheless, Israelis remain suspicious of him. What ever happened to those unforgettable days of “Shalom, Haver” [Goodbye, Friend], as Clinton said over Yitzhak Rabin’s open grave? By the way, had Clinton run for prime minister of Israel back then, he would have won an absolute majority. If Obama ran now, Shaul Mofaz of the Kadima party would get more votes than him.

What we’re talking about is a missed opportunity of historic proportions. Never has Israel found a friendlier administration in Washington, when it comes to all the security issues that really matter. The Israeli public isn’t aware of these details, or perhaps it doesn’t want to be aware of them. In everything to do with the sharing of intelligence, special means, operational and strategic cooperation, the supply of arms, and even international backing (American continues to isolate itself by supporting Israel in all votes in the United Nations’ General Assembly and its Security Council), no administration was ever better than Obama’s. Americans are making the investment but foregoing the returns. Obama is left to feed off spoiled scraps and expelled from the city. There are many he can blame for that, including himself.

At the same time, there have been changes in Israel too. Demography has played its part, and the public has moved to the right. The natural rate of increase among the settlers and the ultra-Orthodox is significantly higher than it is on the other side of the spectrum. This all comes to a climax when Netanyahu and Liberman allow themselves to pummel Abu Mazen too, on an almost daily basis, and no one dares to open their mouths in protest. Would they prefer to see Hamas in Ramallah? Whatever. What difference does it make? They are all Arabs in the end, aren’t they? And so, the celebration continues. The ship sails on, the band remains on deck playing and the iceberg is still shrouded by thick mist (even though it’s looming closer now). Bon voyage.