The March 14 suicide attack on the Ministry of Justice has only heightened tensions in an already divided Iraq, writes Omar al-Shaher. 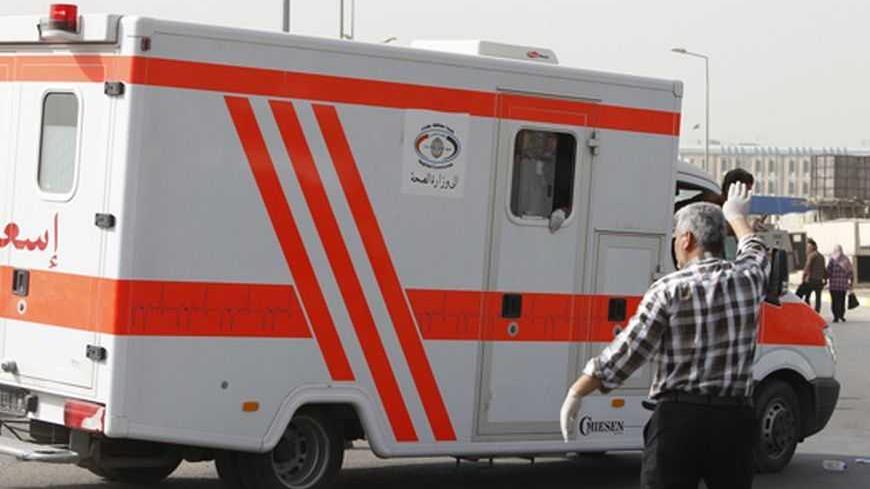 An Iraqi Red Crescent ambulance, transporting people injured in a bomb attack, travels to a hospital in the Al-Alawi district of Baghdad, March 14, 2013. - REUTERS/Saad Shalash

In a bold attempt apparently intended to strike at the “symbol of justice,” an armed group comprised of suicide bombers stormed the Iraqi Ministry of Justice building in central Baghdad on Thursday, March 14, killing 24 and wounding 57 others.

This attack came amid a severe political crisis in Iraq, against the backdrop of continued protests in Sunni areas criticizing the policies of Shiite Prime Minister Nouri al-Maliki. The crisis reached its peak on March 12, when Kurdish ministers refused to attend a regular session of the Iraqi government in protest against the adoption of the 2013 financial budget without obtaining the approval of the Kurdistan Alliance.

Around 11 a.m. Thursday morning, insurgents detonated two car bombs at the entry gates for ministry staff and senior officials. They then stormed the building, which is located only a few hundred meters from the heavily fortified Green Zone in Baghdad. This area houses the government headquarters, as well as the US and British embassies in Iraq.

A member of the ministry’s press office said that gunmen killed all of the building’s guards. They then took over the first and second floors after one of the attackers blew himself up during the attack.

The staff member said that all ministry employees went up to the top floor of the building and locked the doors to prevent the attackers gaining access, before seeking help from the security forces.

According to credible security sources, more than 26 people were killed in the attack, including three of the suicide bombers, in addition to 56 injured. These sources predicted that the death toll would rise, given that some of those injured are in critical condition.

A senior security source who requested anonymity said that “the attackers failed to reach the third floor of the ministry building, where the offices of ministry officials who deal with the files of death row convicts are located.” He added, “The attackers only reached the second floor, where the office of the Minister of Justice Hasan al-Shammari is located. Two of the minister's guards were killed in the attack.”

A Kurdish representative in the Iraqi parliament said that the minister of justice, his agents and the general managers in the ministry were not present in the building at the time of the attack. When asked whether they may have received warnings of a possible attack on the ministry, he replied, “Perhaps.”

Since the beginning of March, the Iraqi security services have said that they had received information that attacks could be carried out prior to local council elections, which are scheduled for this April.

As a result of these attacks, security measures in the capital have increased. Although Iraqi Sunnis had prepared to go to the Abu Hanifa Mosque in the Adhamiya neighborhood—the most prominent Sunni stronghold in Baghdad—to hold group prayers, a number of Sunni officials in the Iraqi government say that the security forces have received orders to prevent worshippers from reaching their destination.

There has been tight security in Baghdad, causing serious disruptions in traffic. These measures were taken in anticipation of a gathering of Baghdad’s Sunni minority in a single mosque, where they planned to carry out a group prayer, serving as an opportunity to strongly criticize the government and the president.

Baghdad’s Sunnis are determined to pray at checkpoints if they are denied access to Adhamiya.

The most prominent demand of Iraq’s Sunnis is the release of male and female Sunni detainees from government prisons. Among Iraq’s Sunni community, there is a prevailing belief that female Sunni prisoners are subjected to rape at the hands of investigators from the government’s security apparatus.

A Kurdish MP, who preferred not to be named, said that “it appears that the attackers wanted to strike a ‘symbol of justice’ in Iraq, so they attacked the Ministry of Justice.” He added, “There is a firm belief among the Sunnis that this ministry—which operates Iraq’s prisons and detention centers and whose judges have issued prison and death sentences against Sunni detainees—is a part of the government’s repressive tools.”