Obama called on Palestinians to begin talks with Israel despite settlement activity; Iraq is on edge; and it's unclear if a Kurdish initiative and Netanyahu’s apology represent new trends in Turkish foreign policy. 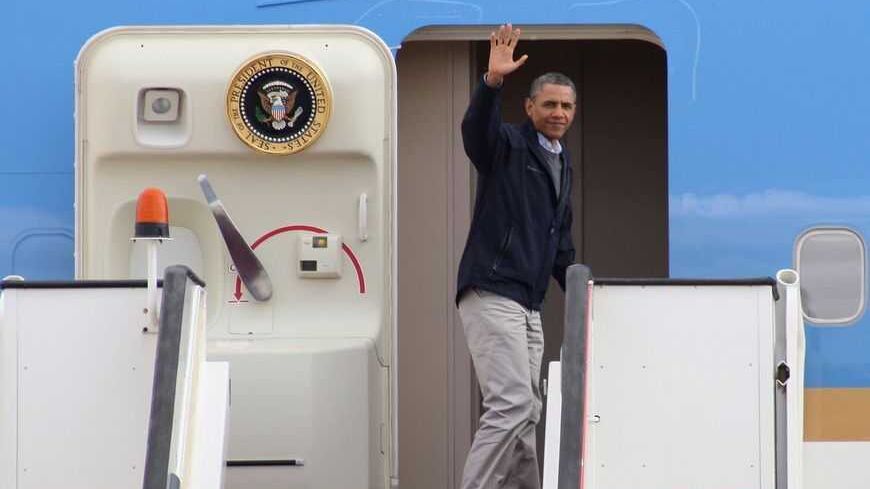 U.S. President Barack Obama waves as he boards Air Force One at the airport in Amman, March 23, 2013. - REUTERS/Majed Jaber

President Barack Obama, who said in Cairo on June 4, 2009, “it is time for these settlements to stop,” made his first presidential stop in Ramallah with Palestinian President Mahmoud Abbas at this side, and made clear that talks between Israel and the Palestinians should not be conditioned on a pause in settlement activity:

“The core issue right now is, how do we get sovereignty for the Palestinian people, and how do we assure security for the Israeli people?  And that's the essence of this negotiation.  And that's not to say settlements are not important. It is to say that if we solve those two problems, the settlement problem will be solved.  So I don't want to put the cart before the horse.”

While Obama took Israel by storm with his charm, many Palestinians were left with mostly disappointment.

Mazal Muallem commented from Israel that “one loving address did what no Iron Dome defense system battery could do for Israelis during Operation Pillar of Defense.”

Akiva Eldar wrote of Obama’s speech to the Jerusalem Convention Center on March 21 that “never, yes, never have more candid and courageous words of rebuke over the policy of occupation been uttered than those sounded by the leader of the free world,” while noting that Obama might have been heckled if he gave such a speech in the Israel Knesset.

Ben Caspit said that Obama’s trip to Israel was “worth the wait” and the “late beginning of a wonderful friendship.” The U.S. president’s true audience was not just the Tel Aviv youth who made the trip to Jerusalem for the speech, according to Caspit,  but rather the new "silent" Israeli majority, the "Lalipdists," named after Yesh Latid Chairman Yair Lapid, the "Barack Obama of Israel," if there is one,  who want peace but don’t believe it’s possible.

The Palestinian reaction was tinged with disappointment, as reported by Mohammed Suliman reported from Gaza and Hazem Balousha from Ramallah.

Daoud Kuttab wrote that “for Palestinians, the trip [to the West Bank] was largely a sideshow, part of the needed décor to complete the scene and to show ‘respect’ to the Palestinian aspirations.”

Obama was greeted warmly by Mayor Vera Baboun in his brief visit to Bethlehem and explained the challenges of occupation to the president, as protesters were kept away, as reported by Kuttab. Palestinians also protested with a "tent city" enclave in the hills outside of Jerusalem and a small march in Hebron.

The question for both sides is what comes next.  U.S. Secretary of State John Kerry has been holding follow up meetings. Dalia Hatuqa observed that Obama’s approach has put a new burden on Abbas to balance the pressure to negotiate while settlements continue with a growing Palestinian movement of peaceful resistance.

Obama did not visit Iraq, which was a regular stop for unannounced presidential and official visits during the more than eight-year U.S. occupation.  The ten year anniversary of the U.S. invasion of Iraq was catalyst this week for a slew of retrospectives on the Iraq war.  While U.S. troops may have left Iraq, the country remains a battleground.  Iraq has been rocked by terrorist attacks in 2013, with already more than 2,800 casualties including over 1,000 deaths because of political violence and terrorism in less than three months, as Mushreq Abbas reported this week.  One of the perpetrators of the attacks is Al-Qaeda in Iraq, which is connected to terrorist groups in Syria, and which has recently targeted areas by Baghdad’s Green Zone operating, it seems, with impunity in Iraq’s capital.

Ali Abel Sadah reported on the political attacks by Muqtada Sadr on Iraqi Prime Minister Nouri Al-Maliki.  Sadr this week labeled participation in Maliki’s government a “sin and a fatal error,” as political tensions worsen in advance of the provincial elections on April 20, 2013.

Sadah’s visit to Tikrit, the hometown of Saddam Hussein, revealed both progress and frustration in making the adjustment to the post-Saddam era.  Among the many observations in Sadah’s piece, residents observed that in January 2012,the government had closed the tomb of Saddam Hussein and moved his remains because of the many visitors.

Obama did not visit Turkey, but the diplomatic score of the trip for the president was brokering Israeli Prime Minister Benjamin Netanyahu’s apology to Turkish Prime Minister Recep Tayyip Erdogan for the deaths of Turkish citizens during  Israel’s 2010 raid on a Turkish flotilla to Gaza.

Tulin Daloglu had reported earlier last week that Erdogan’s "softer" remarks on Zionism to a Danish newspaper were a sign of a potential thaw, and this was indeed the case. Jean-Loup Samaan also wrote of a possible trend in improved Israel-Turkey ties: “The Israel-Turkey split is not really grounded in substance but rather in the personal relationship of its leaders ... In the last months, there have been numerous signs that both countries may be in the process of restoring their political relations.”

Al-Monitor’s Sibel Utku Bila attended the annual Newruz (Kurdish New Year) celebration organized by the Peace and Democracy Party (BDP), Turkey’s largest Kurdish political party, and to hear the message delivered by imprisoned Kurdistan Workers Party (PKK) leader Abdullah Ocalan, who called for a "new era" in Turkish-Kurdish relations and for armed PKK fighters to “silence the guns” and withdraw  from Turkey to make way for a peace settlement.

Denise Natali cautions, however, that there are still questions about where the Imrali peace process is leading:

“Despite Ocalan’s call for ‘arms to be silenced and for ideas to speak’ and Erdogan’s promise to ‘drink hemlock to resolve the [Kurdish] problem,’ neither man has addressed the heart of the Kurdish issue in Turkey: recognition of Kurdish ethnic identity as part of Turkish citizenship and the political demands associated with it ... Unless these key issues are addressed this ‘historical moment’ may represent nothing more than another temporary cease-fire that could lead to even greater conflict between Kurds and the Turkish state.”