New March 14 Group to Launch In Lebanon Next Week

Next week will see the birth of a new current that intends to recapture the spirit of the Lebanese March 14 Movement under the guidance of former MP Samir Franjieh, writes Elie al-Hajj. 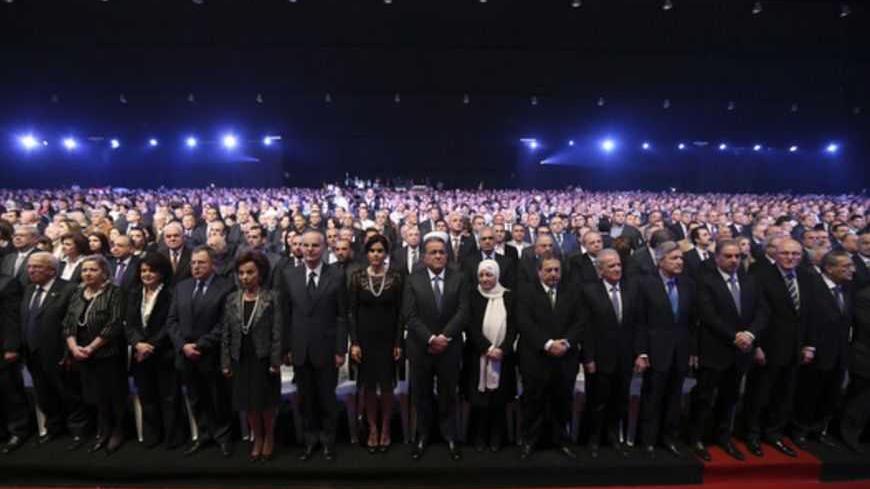 Lebanese leaders and members of the "14 March Alliance," politicians and supporters of former Lebanese Prime Minister Saad al-Hariri stand during a ceremony commemorating the eighth anniversary of the assassination of his father, former Prime Minister Rafik al-Hariri, in Beirut, Feb. 14, 2013. - REUTERS/Mohamed Azakir

Sometime next week, most likely on March 17 or 18, a new political body will be announced in Lebanon. It will have different aspirations and its structure will differ from that of other bodies. It will group together independent intellectuals and activists around one politician who has never before taken on such a role in the past, but who has played many important behind-the-scenes roles since the mid-1970s. The name of this person is former MP Samir Franjieh.

Those working on this political project consider themselves independent Lebanese citizens who have become convinced of the goals of the March 14 movement, which they consider to be the Arab Spring’s vanguard. They strongly support the Arab Spring despite all the setbacks it has encountered. The March 14 movement, which acquired its name from the million-man demonstration in Martyrs’ Square on March 14, 2005, one month after Lebanon's late prime minister Rafiq Hariri’s assassination, was a reaction to a massive demonstration by Hezbollah and its allies six days earlier on March 8, 2005, held under the banner of “Thank You Syria.”

The March 8 demonstration was intended to confront the popular and political wave that was relying on Western and Arab support to demand the withdrawal of the Syrian army from Lebanon, in accordance with UN Security Council Resolution 1559. The Syrians withdrew a month and half later and the political parties that participated in the “Thank You Syria” demonstration would become known as the March 8 Forces.

The activists, who are seeking to organize themselves and galvanize their influence under Franjieh’s guidance, recount the story of what has happened since March 14, 2005. They say that the relatively large parties — the Future Movement, the Lebanese Forces Party and the Kataeb Party — have large resources and capabilities and have to a large extent monopolized the decision-making process, especially after Progressive Socialist Party leader MP Walid Jumblatt left the March 14 coalition.

The growing external and internal pressure, and reality’s demands, caused the troika (Future Movement, Lebanese Forces and Kataeb) to commit mistakes at important junctures and stray from their path. If March 14 wishes to carry on and behave like a majority again, as two elections since 2005 have shown, it should return to the source.

Activists say that they wish to showcase the March 14 movement’s independent face, which is expressed in NGOs and civil-society figures that are either unaffiliated with political parties or affiliated with relatively small parties that in past years played no role, nor were even consulted, in shaping March 14 policies.

One activist explains, “The political parties took over March 14 and asked the people to stay in their homes because they no longer had any role to play. I wished for a good outcome, but in reality, over the past two years March 14 has performed poorly at several junctures and events.” He asserted that restricting the decision-making process to political parties has failed, causing the people to lose faith in the March 14 coalition even as they continued to believe in the movement’s objectives. He said that March 14 reached its lowest point when its political parties split on a sectarian basis after disagreeing on the electoral law. That split crushed the hopes of the masses who during the March 14, 2005 demonstration shouted, “We swear, Muslims and Christians, to remain forever united in defense of the great Lebanon.” (These words were written and read by journalist and political fighter Gebran Tueni on March 14, 2005. He was killed by a car bomb nine months later.)

Franjieh gives the soon-to-be-announced March 14 movement a wider dimension. He told Al-Monitor, “This step will be made under the slogan of ‘Renewing the Arab Spring’ by first reviving the Muslim-Christian unity that was achieved on March 14, 2005 that recovered Lebanese independence and helped build peace in Lebanon; second, modernizing political work by giving it a civil dimension that is far removed from the prevailing sectarian mindset; and third, making Lebanon, which inspired the Arab Spring, regain its Arab role.”

Franjieh is keen to clarify that the consultations are still ongoing to launch this new current this month. He also stressed that the movement would be “a renewal within March 14, not a split or a separation. It is intended to renew the spirit and will be an open current without a partisan structure. Anyone, whether or not they are partisans, can enter it on an individual basis. Whoever has an idea or initiative and would like to join is welcome.”

He belongs to an old political family. His late father, Hamid Franjieh, was a leader in the village of Zgharta. In 1952, he went to bed thinking we would soon be president only to see the presidency go to Camille Chamoun. But the presidency returned to the Franjieh family through Hamid’s brother, Suleiman Franjieh, who was elected president in 1970 while Hamid was sick. Samir Franjieh, however, is far removed from clan politics. He kept many friendships from that era, most notably with MP Walid Jumblatt, who, when attacking the March 14 leaders, exempted Franjieh, whom he called “clean.”

Franjieh played a major role in establishing the Qornet Shahwan Gathering. He is highly cultured and has written countless books, studies and documents in Arabic and French. He has conducted many seminars, lectures and meetings. He is a political thinker with many relations and is well-respected, even among his opponents.