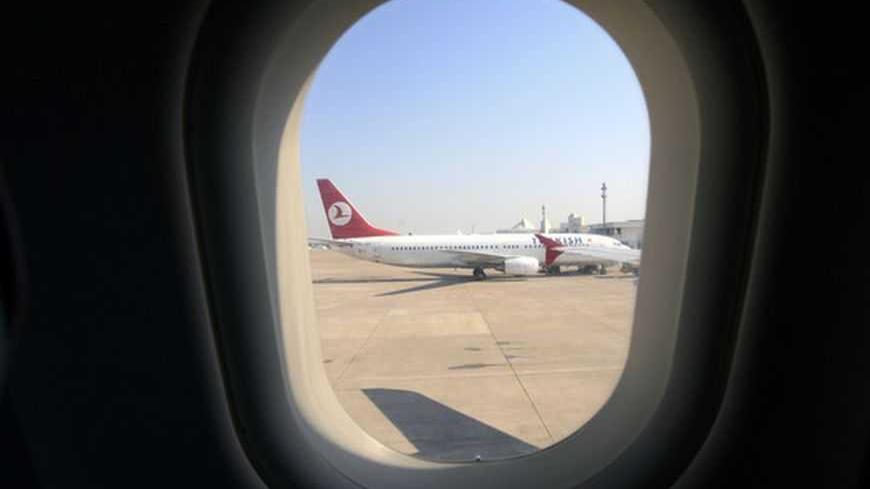 A Turkish Airlines Boeing 737 is seen through a window of another passenger plane at the airport in the Mediterranean coastal city of Antalya Aug. 9, 2007. - REUTERS/Fatih Saribas
February 19, 2013

The neo-Islamist Justice and Development Party (AKP) that has ruled Turkey for more than 10 years, parallel to boosting its strength and effectiveness, has for a while also been pursuing a multi-phase campaign to exclude alcohol consumption from public life and make it invisible.

None of the underhanded alcohol bans systematically expanded over the years were ever justified on religious grounds. Rather, the justification for banning alcohol sales and consumption has always been to protect public health and public order.

The latest example of these stealthy moves comes as the national Turkish Airlines (THY) stops serving alcoholic drinks in all its domestic business-class flights, apart from those to six particluar destinations. Alcohol was already unavailable on domestic economy-class flights.

As usual, the latest ban was justified by officials on non-religious grounds. The chairman of the THY executive board, Hamdi Topcu, said in a statement published by Radikal on Feb. 19 that abolishing alcohol service was “purely for economic reasons.” A communiqué issued by THY on Feb. 13 had announced that alcohol service in business-class flights was being eliminated because of “low demand and logistical reasons.”

Of 36 domestic flights, 16 offer business-class service. The destinations of 10 out of the 16 flights now without alcohol service are conservative Anatolian cities where alcohol has been practically banned for a long time.

Alongside the alcohol ban in domestic flights, it was announced that the number of THY international flights that will not serve alcohol have increased from two to eight since the beginning of the year. The first two countries were Iran and Saudi Arabia, where there is a strict ban on alcohol. To these two countries were added the destinations of Karachi and Islamabad in Pakistan, Cairo and Alexandria in Egypt, Baghdad and Erbil in Iraq, Mogadishu in Somalia, Dakar in Senegal and Niamey in Niger. THY gave the reason for expanding the list as a “’requests by concerned countries.’’

In Turkey, there is no question of banning the sale of alcohol and its consumption in all parts of the country. No such move is to be expected anytime soon. But since the AKP took over power in the central government and local administrations, it has been implementing a gradual "salami-slice” strategy against the sale and consumption of alcohol in public spaces.

A citizen of the Turkish Republic who enjoys shooting the breeze over a couple glasses of wine or raki with friends after work now has a diminishing number of locations and even towns where he can do that.

Turkey has had alcohol-free provincial towns for a long time. In the Black Sea region and inland towns governed by local AKP administrations, there is no question of alcohol sales in public spaces. You can drink only in bars and restaurants of five-star hotels. One reason for this is the social pressure imposed by conservative circles, and the other is the bureaucratic pressure applied by the AKP, which utilizes public-administration tools and privileges to curb alcohol consumption.

For the first time, in 2011, just before the month of Ramadan, Istanbul banned pubs and restaurants from serving alcohol in the city’s cosmopolitan leisure center Beyoglu (formerly Pera) from putting tables on sidewalks, under the pretext of obstructing pedestrian and vehicle traffic. This was a step to make alcohol consumption invisible during Ramadan.

In April 2012, for the first time ever, the governor of the inland province of Afyon issued an edict declaring consumption of alcohol in spaces open to the public "indefinitely prohibited.” Only after the public's reaction was the step scaled back, applying "only to parks."

Forcing alcohol-serving facilities to move to outside of Anatolian towns was already a widespread practice. In 2012, we witnessed the ban of alcoholic-beverage sales in the restaurant of the Grand National Assembly. In 2012 sale of alcohol and its consumption were banned in university campuses. In July, beer sales in a music festival sponsored by a beer company at an Istanbul university campus were banned shortly before the festival was to begin, through direct intervention by the government.

Government officials admit that there is no alcoholism problem in Turkey. Nevertheless, it is impossible to justify the government’s persistence in trying to declare it an illegal commodity as an effort to protect public health. Protecting public health has nothing to do with stopping serving of alcoholic drinks in official state functions and at high-level diplomatic receptions.

It is all about the government and the state’s new Islamist/conservative masters imposing their politicized beliefs on others and thus building a new exclusionist and intolerant political culture.

The same goes for banning alcohol in most of THY's domestic flights, but there is also a socio-economic dimension to this. Social pressure is now working on business-class travel.

It is generally the AKP elite who uses the business-class in flights to Turkey’s stiffly conservative cities, where it is impossible to drink in public spaces. This elite is the AKP ministers, members of parliament, provincial party heads, governors, senior officials and businessmen of the conservative bourgeoisie, who are labeled "Anatolian tigers.”

These powerful people who support alcohol bans or approve of them in their towns tend to become visibly irritated if a passenger sitting next them asks for a glass of wine and begins to sip it. Complaints and even direct interventions are common. Social pressure works because this intolerance corresponds to the conservative political culture that is prevailing in the country.

The six THY flights on which alcohol is still served are to Istanbul, Ankara, Izmir, Antalya, Bodrum and Dalaman. These are the cities and regions that are open to the world and to tourism, without serious problems with a liberal lifestyle. The powers that be do not yet have the power to ban alcohol on these flights, but THY no longer deserves to use its “Globally Yours" slogan on all its flights.